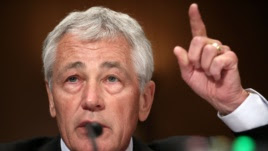 U.S. Secretary of Defense Chuck Hagel said on Friday that the U.S. is ready to cooperate with Iran's new president if Iran wants so.

“If Iran remains committed to its obligations on nuclear program and cooperates with the United Nations Security Council, it can consider the United States its partner,” said Hagel. (Radio Farda, 22 June)

“If Iran remains committed to its obligations on nuclear program and cooperates with the United Nations Security Council, it can consider the United States its partner,”

"If Iran surrenders its rights to the nuclear fuel cycle and commits to zero enrichment permanently, then the U.S. can possibly look at removing some sanctions."

There will be no any 'cooperation' with the world's Zionist most hypocrite, evil and bully empire of the United Satans of America and its life-term master of Israel. IRAN will not change its foreign policy. Never.

The new Iranian government will not repeat the disastrous sloganeering of Ahmadinejad, such as the empty posturing represented in above comments, and hopefully will not allow anything but Iran’s national interests guide its policies. The days of putting everyone else’s interests, near and far, from Middle East to Latin America, ahead of the national interests of Iran belong to those past eight years. The Iranian people just overwhelmingly said no to these types of “internationalism” and sloganeering. Their vote should serve as a reminder of how far off some of these commentators are from the realities on the ground in the country.

Except Hagel did not say Iran should stop all enrichment. Readiness to cooperate with the new president also means readiness to compromise on the issue and it's not hard to revise UNSC resolutions based on that compromise.

The problem is that the same valih-e-fagih is still in place and he is the one that calls the shots.This regime has no national interests except the interest of preserving ones self.

Does it really matter what they say? Haven't more than 30 years of one sanction after another made clear the hypocrisy of American politics already? I think Mark is right to read between the lines.

So enlighten us please. Other regimes do not strive for self-preservation and thus the iri is an evil exception?

But as I remember, it has been stated in articles; by Uskowi about Caspian See and an offer to India to have special rights for oil fields' ownership, that NO GOVERNMENT HAS THE RIGHT to give up (Nation rights) to others...

But in this case as in previous proposal he urged to negotiate...and COME TO TERMS WITH THE WEST...
Are those his callings a kind of double standards ???.

Nader UskowiJune 22, 2013 at 12:31 PM
So Ahmadinejad wasnt working in irans national interests,its funny that so many people voted for him then

US speaks with forked tongue as usual. In any case the blowback from US support for the Wahabbi anti-Iran terrorist group Jundollah has started as these terrorist filth killed 11 foreigners in Northern Pakistan. US is destabilizing the whole region in the name of Iranophobia. As long as the Zionist parasites control US there will be no improvement in relations with Iran. US idiotic policies are pushing Iran closer to Russia and China and alienating all Iranians.

@Anon 12:56 AM
I am surprised you don't know the preconditions of talking to these "democtratic" people. First, by default, you should agree, based on evidence as volatile as ether, that the elections in 2009 was fraudulent. Then you might be allowed to say what you think - as long as you are still playing in their field and with their rules.

If reading between the line tells us that no negotiations will be successful, then we should expect another 8 years of Ahmadinejad-style policies; and believing that the Iranian people made a mistake and should have voted for Jalili.

Safeguarding Iranian national interest and at the same time following internationalist policies of aiding regional and other foreign actors could be contradictory, depending to circumstances. That’s why we have concepts like correct policies as opposed to misguided ones. I am not judging Mr. Ahmadinejad for his intentions or love of the country. His “leftist” policies filled with anti-Western overtones, in the tradition of Latin American populists, did not serve the country well. You cannot slogan your way to defend national interests.

AnonymousJune 23, 2013 at 8:48 AM
There was never one single ounce of proof that the election was anything other than free or fair,if you have proof to the contrary then please present it,otherwise stop flogging a dead horse

Nader UskowiJune 23, 2013 at 9:04 AM
If you think that the only reason that iran has problems with the west is the slogans of its leaders then you are sorely mistaken and the last time I looked western leaders werent exactly shy about their anti iran slogans either,the problem here is the policies of the west towards the middle east,now do you really think the west would have acted differently without Mr. Ahmadinejad slogans?

Th real question here is whether the us`s actions will match its words and based on its past record I`m not optimistic,of course things are not exactly going that well for the us and its allies in the region,the election of a new president could be just the excuse the us is looking for to back down,however time will tell

All presidential candidates, except Jalili, highly criticized Ahmadinejad, who was not even on the ballot, for exactly those qualities. And the people of Iran voted for Rouhani to end those disastrous eight years. You are of course entitled to wish that his policies could continue for another eight years, but then you’ll be among a very small group of the voters thinking that way (some 12 percent voted for Jalili), and out of touch with mainstream Iran.

Show me an election anywhere were the candidates have not criticized the last presidents policies,of course we have no way of knowing how well Ahmadinejad would have done as he was not allowed to run,we have no way of knowing how much of his political success was due to his policies and how much due to his persona.As for the last eight years you can put the blame for those on the west and its demands rather than Ahmadinejads slogans and I think you`ll find that Rouhani will be no more willing to bow down to us threats and demands than Ahmadinejad was,the west has to change its attitude [and slogans] before it can expect to see a change in irans,of course the election of a new president does give the west an excuse to back down tho whether it actually will is anyones guess personally I am not optimistic