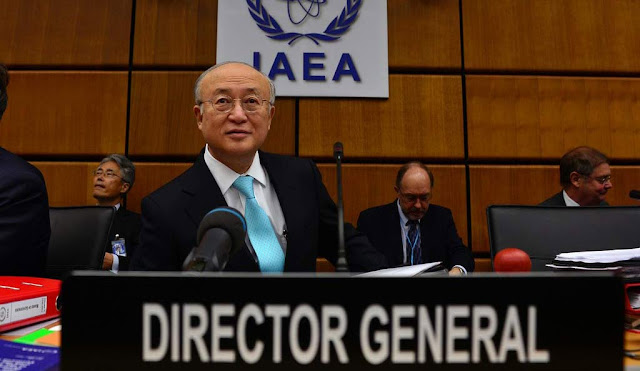 Discussions between the UN and Iran on clarifying outstanding issues related to the country’s nuclear program are “going around in circles,” IAEA Director General Yukiya Amano told the Agency’s Board of Governors at a meeting in Vienna today.
“Despite the intensified dialogue between the Agency and Iran since January 2012, during which time 10 rounds of talks have been held, no agreement has been reached,” Amano told the 35-nation Board. “To be frank, for some time now, we have been going around in circles. This is not the right way to address issues of such great importance to the international community, including Iran,” Amano said. (United Nations, 3 June)
Amano added Iran is not providing the necessary cooperation to enable the IAEA to provide credible assurance about the absence of undeclared nuclear material and activities. “The Agency therefore cannot conclude that all nuclear material in Iran is in peaceful activities,” Amano said.
“Iran continues to advance its heavy water-related projects. The number of centrifuges installed by Iran also continues to increase, as does the amount of enriched uranium it holds,” he continued. “These activities are in clear contravention of resolutions adopted by the Board of Governors and the United Nations Security Council.
“We need to achieve concrete results without further delay to restore international confidence in the peaceful nature of Iran’s nuclear activities,” Amano stated. “In order to achieve that objective, the Agency has made clear its view of the elements which the structured approach should contain.
“First and foremost, Iran has to address the Agency’s requirement to conduct effective verification. Unless Iran does so, it will not be possible for the Agency to resolve outstanding issues, including those relating to possible military dimensions to Iran’s nuclear program.”
He called on Iran to engage with the Agency to achieve concrete results in resolving all outstanding issues “with a sense of urgency.”
Photo credit: IAEA Director General Yukiya Amano addresses the Board of Governors Meeting in Vienna, Austria. 3 June 2013. (Dean Calma /IAEA)
Posted by Nader Uskowi at 4:08 PM

Amano seems hell bent on pleasing his sponsors at the expense of ethics of his profession and the truth. The ordinary innocent Iranians who are badly affected by the sanction must find that smug smirking grin on his face intolerable to look at.

What a revolting little puppet he is,the richard butler of the iaea.If I was iran I would reduce my cooperation with the iaea to the barest minimum as long as this little creep was in charge,hopefully he will not be reelected at the end of his term,sadly the west does not care how many international organizations they have to discredit or destroy the credibility of in order to try and hurt iran,truly pathetic just like amano himself

Same Ole thing, over and over again, a delay tactic by the Iranian government.

As arses get kicked in Syria, pressures mount from all rat holes.

New sanctions on car industries in Iran and some economical Terror plan on Iran's currency has also been ratified.

I guess that's the price of true independence. I hope Iran can master through these attempted intimidation again

the UN kicks the arses of the Iranian government and the arse by grace of God in London brays that it's "Terror-ible".


the sanctions are only going to get increasingly heavy and painful for the iranian nation....... or worse things will befall all over Iran.

TOO MUCH ASSES and few substance!! you are only braying and braying!and this is worse on your part!!.

BM- I will make greater effort so as to meet the lofty standards of substantiation, solid sense and sanity that are the hallmark of your own comments.


verily, I shall keep this representation of you near to my keyboard as inspiration.

SORRY PAL WE ARE Muslims and we do not visit any source or website!!.