How Al-Qaeda Changed the Syrian War

‘Since its appearance last April, ISIS has changed the course of the Syrian war.’ 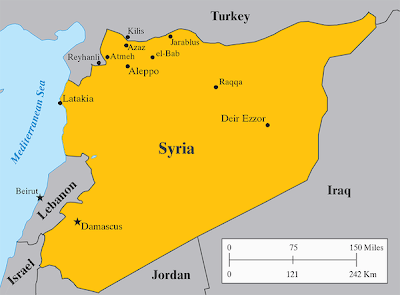 Sarah Birke has written an important piece on how Al-Qaeda changed the Syrian war.

“While ISIS (Islamic State of Iraq and Greater Syria) and Nusra share many aims, and both are well funded and trained, there are significant differences between the two groups. Jabhat al-Nusra stresses the fight against Assad, while ISIS tends to be more focused on establishing its own rule on conquered territory. Nusra has pursued a strategy of slowly building support for an Islamic state, while ISIS is far more ruthless, carrying out sectarian attacks and imposing sharia law immediately. And while Nusra, despite its large contingent of foreign fighters, is seen as a home-grown problem, Syrians at the border frequently described Da’ash  (ISIS) as foreign ‘occupiers’ in their country.”

“While Syrians continue to suffer, sandwiched between a brutal dictatorship and extremist groups, Arab and European jihadists are being indoctrinated and trained in the world’s most active battle zone–experience they may someday bring home.”

To read Sarah Birke’s piece in the 27 December issue of The New York Review of Books, please click here.

What is the Sarah B. ethnicity?

Have Uskowi graduated from a journalism at his "universities"?

If he is not a journalist by his profession, who is searching for him for all those "materials" and "photolets"?.

I don't know how my background is related to this topic (like your thoughtful comments on Syrian war); but answering your question, I was the youngest editor-in-chief of.a Tehran daily during the time of the revolution and now a blogger. Why?

One wonders what will happen in those western and other countries when those citizens who went off to fight the jihad in syria,with their governments turning a blind eye,finally return home,somehow I just cant picture these head chopping cannibals sitting around doing nothing,the phrase "payback is a bitch" does come to mind

The article is biased !-@-it always refers Assad as a dictator and inhuman ,@ the writer seems to endorse the view that the Islamist groups out there fighting 'only' get their funding from private donors which is not true!-@- while the whole world has known that the WEST is supporting a group that uses terror and can not be trusted with power and all the funding is and was a fraud and a waste of public funds,the writer forgets to mention this and rushes to conclude that "Syrians are sandwiched between a dictator and extremist groups!" .

The good news is that Sara Birke is not the only analyst out there commenting on the war!.

Four decades of Assad dictatorship is the root cause of the Syria conflict. As is the case in many revolutions and civil wars, the anti-dictatorship movements could attract extreme reactionary elements who oppose the dictator not for his dictatorship but for other reasons, in this case opposing Assad's secularism and an attempt to establish a non-secular religious dictatorship.

It is true that foreign countries, chiefly the Iranians, the Saudis, The Qataris and the Turks have taken side with the government or any number of opposition groups, ISIS included, in this messy and dangerous civil war. They should all leave Syria, and let Syrian people decide their own fate.

Four DECADES of dictatorship is a problem to some few people in Syria and one Uskowi ! ,but it has never been a problem to the West.And history is the best witness to this! as we are reading history showing the West courting the dictatorship in south Africa just as we are are seeing the same scenario today with the Persian Gulf monarchies in good terms with the west despite horrendous crimes and dismal human rights records!-,Killing innocent people in bloody campaigns to remove dictators among themselves to install new ones.

@ Question one-
why is democracy so expensive ?-is it prudent for the west to use merciless goons
who kill those who oppose their views ,silence critics,use religion and terror to subdue their subjects into submission.Why didn't the 'beacon of democracy try sanctions on the Assad regime for a start before supporting the genocide?.

@Question two
-your view that 'the anti dictatorship movements could attract extreme reactionary elements..' is not only a fact but HAD BEEN known by the CIA.They saw it coming!.-why waste public funds,kill innocent lives,on a scheme that has a zero chance of succeeding ?.

i loath this western daytime hypocrisy -using terror and violence in a costly campaign to remove one 'dictator' while dinning with the other one next door in the same region!..

B.M.A, please go back and look at the videos of the peaceful demonstrations and marches on the cities of Syria in the first year of the conflict and during the height of the Arab Spring, and then dare coming back telling us that only a "few people and one Uskowi" saw dictatorship as a problem in the country.

The least costly way to have avoided the current situation was for Assad to introduce meaningful reforms and let a new government taking responsibility for managing the country. Four decades of Assads were enough.