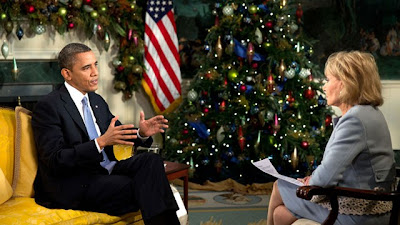 The United States has recognized the newly formed Syrian opposition council as the legitimate representative of Syrian people. President Barack Obama made the announcement today during an interview with ABC’s Barbara Walters.

“Obviously, with that recognition comes responsibilities,” Obama said. “To make sure that they organize themselves effectively, that they are representative of all the parties, that they commit themselves to a political transition that respects women's rights and minority rights.” (ABC News, 11 December)

Photo credit: President Barack Obama during an interview with ABC’s Barbara Walters at the White House.
Posted by Nader Uskowi at 11:30 PM

No kidding! LOL. It is US and its puppets that have created this "council of imbeciles" and Islamists. I wonder how the US will react when these Salafi terrorist groups start a Jihad to regain Golan and Palestine from its Zionist masters with CIA and NATO supplied weapons? US is on a highway to hell indeed.

Talking about ‘imbeciles’, are you saying people fighting to regain freedom in a country under four decades of Assad dictatorship are doing so because they are retard? Are you saying fighting for Golan and Palestine will also qualifies them as imbecile? I guess you haven’t been on that highway or probably had taken the wrong direction.

Nader, your ignorance of reality is very touching but the FACT remains that Syria is a vert fragile state and an imperialist creation from the Sykes-Picot treaty to carve up the post Ottoman empire. Secondly, the "dictatorship" you parrot is a secular and popularly elected government which still has over 70% support including, Alevis, Christians, Kurds and even Sunnis (who make up at least 80% of the brave military that is fighting the US backed murderous Salafi terrorists). Sometimes, one has to really wonder why you have this one-dimensional blog when you know nothing about ground realities in the region but parrot US/Zionist wishful thinking and propaganda. I am also wondering why you censor so many posts as the truth is hard to bear but can not be silenced.

BTW, the Assad regime will not be toppled that easily since it has a very cohesive a strong military, support of Russia and China and most of the free world and has its back against the wall, so it will fight the CIA/NATO supported terrorists to the last. ONLY REAL IMBECILES WOULD THINK DIFFERENT. LOL.

Mr. Uskowi you seem to have a very schzophonic view of the world which seems to alter between total lack of integrity and pushing US government propaganda. One the one hand you rant-on about the theocracy in Iran and at the same time support Islamist Salafi fundamentalist agenda in Syria. I have also noticed that you have a very thin-skin and limited view of the world and hence a natural propensity to CENSOR and stifle intellectual debate on your blog. Just for your information, if the Assad regime falls in Syria and the US backed Salafi terrorists take over, it will make the massacres in Bosnia and Palestine look tame by comparison. I hope you have the decency to debate your paradoxical opinions rather than vainly try to stifle free speech. Thank you.

Nader, I appreciate you not censoring my 7:41 post. It was not a persoanl attack but just a query about your rather paradoxical views on the Syrian and Iranian situation. To begin with, as you may have deduced I am not a Akhoond supporter but a nationalist democrat, so I find your support for the US sponsored Salafi terrorists in Syrian rather baffling?. President Assad and his son Basher may not be ideal democrats but they still offer Syria (a trucated Sykes-Picot imperialist creation with carve of of Lebanon for Maronites)the best hope. Syria's multi-confessional nature makes it an ideal target for protracted bloodletting with the possible murder and genocide of over 5 million Alevis, not to mention the Christians and Kurds at the hands of US/Saudi and Khalleji brainwashed murderous Salafi thugs. The so-called FSA only yesterday murdered over 200 Alevi civilians near Aleppo as "revenge" attacks. This is just a shape of things to come as the Turks who masterminded the genocide of Armenians in the last century seem to be advising a similar genocide outcome by tutoring their Salafi puppets. BTW, Bashar is an accidental President as his father had chosen his brother Basil as his successor, but he was killed on a road accident on the Damascus hills speeding in his Porsche. The Alevis who have dominated Syria since 1943 have their backs to the wall and have no choice but to fight-on. Bashar al Assad is no Ghaddafi and will fight to the last. He is not about to run.

The Syrian situation is very complex and Russia and China for once have taken the righ stand, and hope they check the US agenda which is utlimately aimed at them too. I am not sure about the Iranian mullahs who are duplicitous and their only game is self-survival. They can easliy sell-out the Assad regime if they think it will benefit them. One has to keep in mind that the Iranian mullahs and Khomeini himself was western creation too. If memory serves me right, he initiated his campaign against the Shah from the safety of France and then descended with his draconian Islamic Republic on an AirFrance jet. Middle-East has been a playtoy of western imperialists for a longtime (no thanks to OIL and energy riches) and Syria is the latest bloody pawn in this genocidal game which the Arabs seem to excel at. It is shame really for the region and its ignorant, brainwashed, violent and hapless people running on the outdated opium of 7th century fundamentalist Islam which is totally counterproductive and retarding the progess of the Arabs and people in the region. It is no coincidence that the west is now a big supporter of violent and murderous political Islam,

Same was done with others like Fatah/ Hamas and co. At the end those insisiting Fatah to have been the legal and sole rep. of Palestine had to bow to Hamas and their gains and wrath.
Furthermore the 5-6 nations that keep deligitimizing others had to twist and generate occasions for Fatah to gain some leverage.(same will happen to Syria)
All simple transparent nonsese politics to pleasee the Pro Israeli Press/think tanks / lobbies/ blackmailing those 5-6 nations politicians with insider knowledge.

I am not impressed by “secular” nature of Assad’s regime. We’ve had many secular fascist and authoritarian regimes, from Hitler to Mussolini to Franco. And the Shah in Iran.

I believe secularism in the 21st century is a requirement for political development of the third world countries, but it is not enough and it is not even the most important factor in the region. I prefer Islamism of Erdogan to secularism of Assad. The most important factors are the degree of freedoms (press, assembly, parliaments…) and regards to human rights. Assad and his father fail on both accounts. Four decades of their “secular” dictatorship is enough, isn’t it?

I disagree with you on your analysis of Iran too. Khomeini did not organize his movement in Paris. That Islamist movement started years ago, in 1960s, led by Khomeini, against the Shah’s reform programs, especially the women’s rights and the land reform. When he arrived in Paris, he was already the head of a burgeoning Islamic movement.
The tragedy of what became the Islamic Republic was a deadly mixture of religious rule (as opposed to secular) and authoritarianism (in persons of Khomeini and later Khamenei).

I suppose I agree with you that a secular authoritarianism that does not get its orders directly from God is probably more preferable! But one cannot support dictatorships in the 21st century Middle East fearing that people might support an Islamist government. Turkey is a great example of an Islamic government that can coexist in a modernizing environment. Egypt could follow suite. Syria can do same, although longer Assad clings to power and murdering his own people (even throwing Scud missiles at them), greater chance for extremists to take the upper hand within the opposition.

the Assad dictatorship no controls Syria and will never again control Syria.

It's already lost and trying to hang on to a rump.

The "support" of Russia and China is no longer anything tangible.

Actually Khomeini was a major beneficiary of the Shah's agricultural "white Revolution" reforms, as many mullahs already had substantial landholdings in Iran's fuedal system. It is estimated that in 1964 he had over 3000 families of peasants working on his family landholdings. His major anti-Shah platform was the Shah granting US forces and personnel in Iran indemnity from prosecution if they committed crimes on Iranian soil. His sermons is quoated below:

This was his major disaggreement with the Shah and also led to the creation of armed struggle via the Islamist Fedayeen and Iranian Hezbollah. The Bazaaris also had significant support for mullahs. In anycase, the granting of safe sanctuary at Neauphle-le-Château, and access to western media after his expulsion from Najaf by Saddam gave Khomeini the wider audience and support base. The French DGSE and other western intelligence were well aware of Khomeini's activities and if they wanted to, they could have easily deported him or silenced him. But, the mullahs perfectly suited western interests as the Shah was getting too big for his boots. His arrogant and boastful interviews to western media of turning Iran into a "industrial and military superpower" rivaling Japan sealed his fate. The US was interested in a puppet and not a strong independent Iran in the oil jugular of the world.