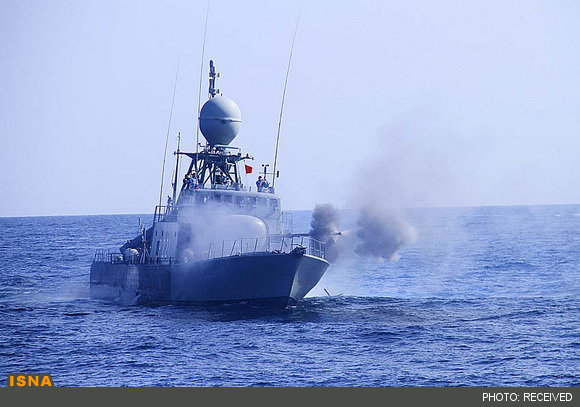 Iran today started six-day naval exercises in the Strait of Hormuz. IRIN Commander Rear Admiral Habibollah Sayyari said the “Velayat 91” drills would last until Wednesday across an area of about 1 million square kilometers in the Strait of Hormuz, the Gulf of Oman and northern parts of the Indian Ocean. (IRNA, 28 December)
Adm. Sayyari had said on Tuesday that the new drill would test the navy's missile systems, combat ships, submarines and patrol and reconnaissance methods.
Rear Admiral Qolam Reza Biqam, IRIN deputy commander, told reporters today that the IRIN will closely coordinate the exercises with the IRGC Navy and will use IRGC drones throughout the six-day drills. (Fars News Agency, 28 December)
File photo: An IRIN warship (ISNA)
Posted by Nader Uskowi at 9:43 AM

Mr Putin has suggested that we have many navy and other military drills and also to talk much craziness....we will wipe the USA offf the worlds map tomorrow....we will destroy Israel in five minutes, next week and so on......Mr Putin says it helps Russia sell more oil at higher prices.....what does it do for the common man & womean in Iran??? Will they feel more upbeat/confident when they die for Mr Putin too???
The poor people of Iran.......kept in the dark and fed dung!!!

IF this blog were to be pitted against the IRANIAN REGIME in the field of blatant censorship,i mean ,if we can afford to PIT THE REGIME and this blog in a censorship DUEL!-I CAN BET MY LUNCH THAT THIS BLOG WOULD BEAT THE REGIME HANDS DOWN!!.

http://www.youtube.com/watch?v=TZGvIlHo-Hc&NR=1&feature=endscreen --- Imam Khamenei on why Iran doesn't compromise with the US.

There you go again,writing nonsense.

Hooraay For Mr Putin! Shut up Anon! Where was your out cry and childish rants when the USA/Zionazi's were threatening the common man and Woman of Iran? you were silent! Now that you see that Putin has Iran's back, and that the Pahlavi's will never return to Power,and that all hope for regime change in Iran is a Hopeless cause! You want to whine like a wicked spoiled child! So shut up and deal with it. To all the Anons that Doubted the power and Influence of Iran, Now you see that you were severely wrong. Victory has come to Iran! Long Live Putin! Long Live Iran!