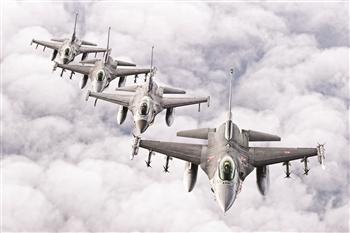 Soon enough Turkey will be a Sunni version of Iran. Islamists cannot be appeased for very long before they want absolute power. Erdogan just understands that you cannot rush an Islamisation program in a country that has enjoyed the benefits of secularism for more than 80 years. The separation of 'church' and state is increasingly a dying theory across the world. We will all suffer for its loss.

Why can't Iran just be Iran and not Islamic republic or Islamic what ever?
Should the US be called, The Christian Republic of America? France,The Christian Republic of France? No way!
So why should Iran be called an Islamic Republic of Iran?
Islam is just a another belief which was forced upon Iran by foreign invasion.
I spoke to a son of a mullah once,and he said to my surprise that Iran is really a Zartosht country.

SO YOU ARE COMPARING A CONFUSED LEADER IN THE NAME OF ERDOGAN and the LEADER KAMENEI?-am SORRY TO say it but you treat the delivery of the-f-16s as though they are manna from heaven give to JEWS DURING PROPHET MOSES TIME[AS]!!.THIS IS THE IRAN YOU WANT ,A BEGGAR,A STOOGE,A CREATION,A CHAINED BULLDOG,A BOOT LIKER!!.on the contrary we want a technologically independent,a self standing entity!THE WEST IS GOING TO PUT ONE HUDDLE AFTER THE OTHER,BUT IRAN IS HEADING THERE DESPITE HATEFUL CAMPAIGN FROM THE WEST AND THEIR AGENTS!!.

Your anger aside, I do not advocate for an Iran which is a beggar and a boot licker! I prefer to see an Iran with a government that do not discriminate against its own people based on their religious views, gender and ethnic background; an Iran that respects human rights of its citizens and not filling Evin prison with prisoners of conscious; and an Iran that respects the basic freedoms of its people, including the right to form political parties and openly challenge their government. But Islamic Republic cannot possibly become that Iran, could it? The leader, who you give him prophet-like status, notwithstanding his claims that he is the representative of the hidden imam on earth, is setting up an authoritarian form of government that is not acceptable in modern era. You said Erdogan is confused! Well I prefer his confusion over the clarity of authoritarianism any time!!

LOL! We know for sure that B.M.A is Khamenei's personal Slipper Licker!

why can't IRAN BE JUST IRAN...

INDEED YOU ARE ON THE OPPOSITE SIDE OF HISTORY-very sad indeed!!!.

Iran can't be a just Iran as long as the regime imposes its stupid and ugly ideas of justice.

women aren't half a person, homosexuals should not be put to death, and people must be free to practice whatever religion suits them, regardless of the religion of their parents.

I really couldn't disagree with you.

No you're wrong as regards Iran.Iranian people have had enough of experimental political Islam governing the country.
The sad part of it is that you can't see that despite it being right in front of your eyes.