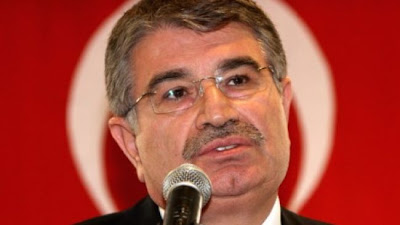 Turkey's Interior Minister Idris Naim Sahin said on Sunday in an interview with Today’s Zaman that Iran was sheltering members of the Kurdistan Workers' Party (PKK) in its territory while providing the Kurdish militants free rein to operate against Turkey from Iran without restriction.

“Recently, it has been witnessed that the terrorist organization has intensified its campaign through Iran, and Iran has not been paying much attention to security measures, especially in border areas [to thwart their movements],” Sahin said.

Sahin added that the PKK was operating a base inside Iran, called Shahidan (“Myrtars”) capm, for recruitment, training, fundraising, transit and supply of arms and ammunition operations.

“Intelligence was received indicating that the Sehidan camp, which is located at Sehidan Mountain across the border from Hakkari province, where Iran had denied access to the terrorist organization in the past, has again become operational and that terrorist members who were injured during operations [conducted by Turkish security forces] were being treated in Iranian state hospitals near the border area,” Sahin said. (Today's Zaman, 23 December)
Photo credit: Interior Minister Idris Naim Sahin (World Examiner)
Posted by Nader Uskowi at 11:31 AM

It seemes like Turkey is really serious about reviving the old Ottoman empire. Look how they are doing their absolute best in spinning and distorting the truth. Fortunately it's too easy to see through their haphazard lies. Turkey's image has truly been muddied after it stuck its nose into Syria. The International community know not to trust anything coming out of Erdogans regime from now on.

A couple of points:

* Why don't the official Turkish pricks seize their dirty strategies against the sovereign people & nation of Syria?

* Why do they insist on waging a proxy war and coup d'etat versus the legitimate Syrian government?

* Besides why won't the administration of Erdogan give in to PKK demands anyhow?

They expect the secular Assad to give in to the Jihadi Islamist mercenaries which are basically the long-arm of the Arab sheiks.

The most worrying facet of these kind of lousy accusations is how it is meant to be planted as seeds for a new casus belli against Iran in the future.

WHAT A LOAD OF NONSENSE!!!

-Iran can't afford to do this to a neighbour knowing well that TURKEY CAN DO THE SAME TO THE MKO AND MAKE LIFE A HELL FOR THE REGIME IN IRAN!

-IT is wrong in ISLAM to undermine a Muslim Nation and i dont thnk IRAN can bend such low to cooperate with groups associating themselves with terrorism!

-TURKEY feels threatened!by IRAN.intially they thought it was going to be a walk in the park for the fighters in SYRIA,but it has downed on them that surely SYRIA is is a hard nut to crack thanks to the support from IRAN.

-IRAN HAS NO BUSSINES TRAINING TERRORISTS FOR ANYONE!and instead of baby crying,TURKEY NEEDS TO SERIOUSLY REVIEW ITS RELATIONS WITH ITS MUSLIM NEIGHBORS FOR THE SAKE OF REGIONAL STABILITY!.

This is a result of the Syrian civil war.

If I'm not mistaken the Shah used Iraqi Kurds to pressure Saddam into signing the Algiers agreement.

You support jihadis, we support the Kurds. Seems like a fair deal.

after russain armee, the turk armee has the greatest rate og suicide among the recruits.
The officiers are mishandling own recriuts, more turks soldiers died by suicide then by pkk attacks.
of course with this kind of loser armee they can not beat the pkk.
therefre they come and accusing iran.
why should iran support pkk ?
the pkk is enemy of iran as weel

http://www.youtube.com/watch?v=TF0-r5XUMZc <---> Interesting analysis on the military situation in Syria.

the Assads took power in a military coup and are running a one=party police state and dictatorship.

it takes a braying donkey to claim that they're a legitimate government.


and you needn't worry about turkey making war on the Iranian theocracy. Turkey would be merely a small part of the many nations that would be engaged against Iran should it come to war.

BMA, you finally show your true face and confuSSSion...

How about suicides in the US army ???

Turkey is desperate as the NATO/Zionist/Turkey Salafi terrorists take a beating. For 2 years just talking Turkey.LOL.