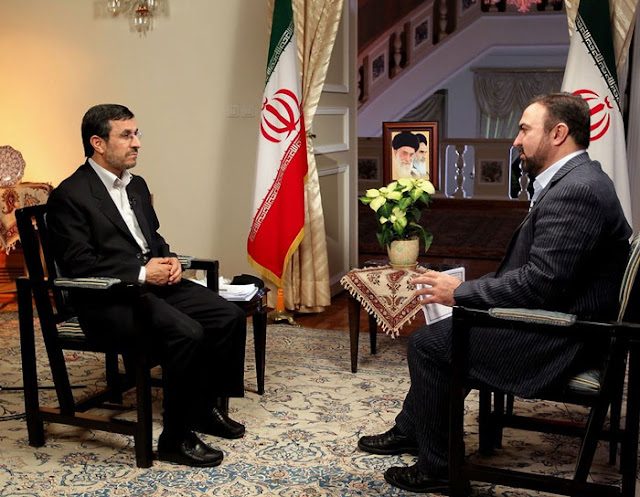 Iranian President Mahmoud Ahmadinejad today gave a long TV interview that was broadcast nationwide to discuss the economy. And he succeeded in sending confusing, and at times contradicting signals on the state of economy. He blamed the country's “ailing economy” on problems he had inherited “from the past 60 years” when he became president, and called for implementation of “a plan for recovery of the national economy.” At the same time, he strongly defended his government’s economic records, and basically asked everyone, especially the legislative branch, to stop meddling in the affairs of the executive branch and let it continue its good work.

Ahmadinejad defended the government’s subsidy reform program, the centerpiece of his reelection campaign. He, at time on the defensive, justified the way his administration handled the reforms. He said his administration had made necessary feasibility studies prior to putting the program into practice, but Majlis wanted to considerably slow down the pace of the reforms and ultimately suspended the program altogether last November.

Oddly, Ahmadinejad promised to undertake other major economic reform programs during the last few months remaining in his last term as president, not explaining why he did not undertake these programs during his first seven plus years in office. The reforms as promised included the restructuring of the banking system, restructuring of the country’s distribution system of goods, revamping the tax system, and changing the national currency.

Ha Ha Ha!! So Ahmandinejad is blaming the Shah as well for the Islamic theocracies failures?
When the Shah left the country it was in a far better shape compared to the height of the economy of the Islamic theocracy.
After his rants there is truth in the saying,Az Akhoond pooruhtar payda nemesheh.

subsidy reform was a good idea and it ain't Mahmoud's fault that the nuclear weapons development program brought on the sanctions that are strangling the Iranian economy and rendering phasing out the sanctions unworkable.

the blame for the oncoming economic disaster belongs to the head of state, not the little guy.

How one can understand that Mr. Ahmedinejad succeeded in sending confusing and at times contradicting signals....???

There is another interesting question, what time of "Yesterday" this (and other) article(s) were (use to be) posted ???

The subsidy reform program was indeed a good idea, and this blogger had supported it during its pre-implementation phase. The problem arose when Ahmadinejad panicked (along with other government leaders) and added the idea of monthly cash payout to 90 percent of the country's citizens to avoid a popular revolt in the aftermath of the implementation of reforms and the expected rise in prices. What happened then was the worst possible of outcomes: the cash handouts became the main culprit of the rising inflation and they became another form of government subsidy: In the name of reforms, the government created a vast subsidy program.