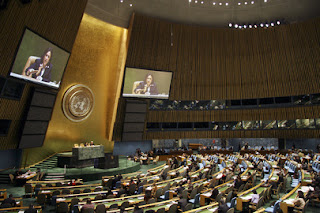 The majority do not see the accusations leveled against Iran as a major issue. An abstention means that you don't take any issue with it and don't recognize the allegations raised against the country in question.

Hello,human rights violations have been going on in Iran for over 34 years.

Abstention does not mean what you say, nice try, it means undecided or opting not to vote. BTW, when the U.N. human rights commission today criticized the Syrian opposition for their abysmal records on human rights, pro-Assad commentators hailed it as a proof of their stand on the conflict (there were a lot of abstentions on that decision as well). But I doubt that those same people support the U.N. vote on Iran's abysmal human rights record. Even though both votes were taken on the same day!

More like ever since the UN charter was created in 1948.

PATIENTLY WAITING ON BASEMENT OF THE UN building ! waiting for FOR a UN CONDEMNATION OF ISRAEL AS A PALESTINIAN HUMAN RIGHTS VIOLATOR!!!

I am sure you can express your sentiments on Israel's human rights violations at proper websites dealing with Israel and Palestinian-Israeli conflict. But you are now commenting on a post related to Iran's abysmal human rights records. What say you? Do you support Khamenei and his government when it comes to human rights violations in Iran? Do you believe the opposition in Iran should be crushed to "strengthen" the regime?