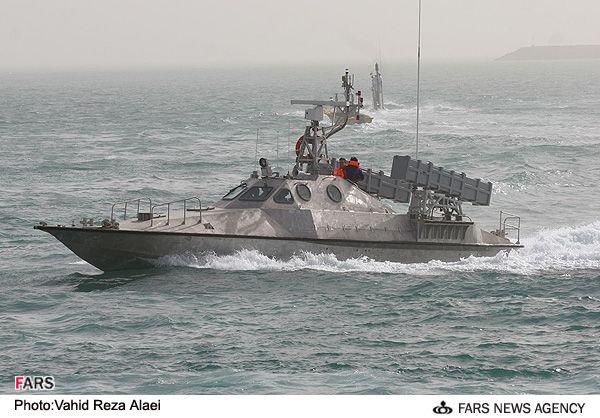 IRGC Navy began a four-day naval exercise on Tuesday in the Asaluyeh and South Pars region of the Persian Gulf. The region holds one of the world’s largest natural gas reserves.
“The exercises are aimed at improving the different units of IRGC Navy in Fourth Region. We will assess our defense capabilities of human forces and facilities,” said IRGC Rear Admiral Ali Reza Nasseri. (Mehr News Agency, 26 December)

How come Israel has killed Mr Sattar Beheshti? He has done no harm to them that we can hear about.

The Iranian navy ought not to be underestimated, because they have great amounts of advanced anti-ship & cruise missiles and an inventory that is made up of very large numbers of fast attack crafts.

There is a very good reason why the US has not attacked Iran, and part of it is that the US is extremly cautious about the safety of their Navy crews and hardware, hence the wariness on their behalf of starting aggression against Iran. Plus the civil society in the US is pretty sensitive to the news of casualties resulting from combat (e.g. the Vietnam war).

Iran is not Iraq, as many of you have heard many times. But there is truth to that merit, and that statement should not be taken lightly, however much it may be repeated. The Iranian armed forces are actually capable of dealing a blow to any aggressor, even the US.

Iraq on the other hand had no navy to speak of, and most importantly, totally lacked the weaponry to strike back at the US fleet.

Iraq's military industry & manufacturing was much smaller relative to Iran's, even at its height, and they had zero emphasis on developing and producing potent anti-ship & cruise missiles. They were not clever enough to seek assistance to help them get on that track.

So as a result the poor Iraqis were like a ripe fruit, waiting to be plucked, as was Afghanistan, as was Libya, as is Syria, as is Venezuela, as is Sudan.

Actually Iran & North Korea are the only countries out of all the enemies of the US that have the ability to defend themselves to a higher degree and make the US navy feel the pain.

Now some people will come up with the argument that Iran's military is weaker than during the Shah's reign, but the truth is that it ain't. It is not any less powerful as it was back then if you look at it on a broader spectrum. The difference is that Iran is now able to domestically produce highy sophisticated armaments for the naval, air and ground forces.

They just have not progressed to the point where they can build a modern jet fighter/bomber, such knowledge and capability will take considerable time to realize, but it can be done through research. Also, they should care to strengthen their cooperation with China in that field.

Iran's top priorities for enriching and sustaining it military might has been to develop and expand:

#1 Its Naval assets (mass production of fast attack craft armed with AShM & mass production of stealthy midget submarines armed with modern torpedoes). This is crucial because any likely aggresion towards Iran will be coming from the sea, that is where Iran must make its first attempt repulse the oncoming enemy. That is where the most harm must be inflicted upon the enemy, before they make any headway into Iran.

#2 Its ground forces (production of various modern small and large caliber guns/rifles/artillery, tank upgrades, modern ATGMs in assymetrical positions which will play a key role in the event of an invasion).

#4 Its air defence forces (development of radars, creation of radar sites, production of anti-air missiles that are more capable the ones they had in the 70s/80s/90s).

#5 Its air arm & helicopter fleet (most predominantly arming their aircraft & gunships with modern ATGM and AShM.)

Can you say, irrelevant to this article...

An air defense upgrade and the implementation or shortening of the 5 years development plan of the national air defences, anounced at the begining of the 2011 year by Gen. A. Salehi, is a top priority.

Gen. Esmayeli has informed that in the 2013, the design of the Bavar system should be completed...That systeem will apparently excceed parameters of the S-300.

http://www.youtube.com/watch?v=qP8FkjVN8nk --- Iran and US must reach a comprehensive deal in direct talks.

A spokesman of the U.S. Pentagon has ever said in a statement that the authority was really confused with the real abilities and capabilities of IRAN's military power and strength. Indeed, IRAN isn't that stupid enough to reveal all its military cards to the world, moreover, to the U.S. and its life-term master, Israel.

Stop using the words "advanced" and "iranian" in the same sentence. Their Navy is most assuredly not.

It will be a Turkey shoot for the US navy!

indeed, the Iranian navy should not be underestimated. it is quite capable of taking on the Somali pirates,

and it's really wonderful that it has been announced that the design of the air defense system is said to be really promising and that the design is possibly only a year away from being completed.........

I'm sure that holding up the technical drawings will be VERY effective when the bombs start falling ..... years before any REAL air defense is REALLY built.

Time is working against an enemy...
The cooperation with the DPRK is a fact..
Couple years ago Gen. Vahidi issued a directive to relocate key enterprises to...other locations.
In previous years Iran has built extensive number of tunnels....

Conclussions abouut recent info regarding air defenses, should be obvious for average thinker.