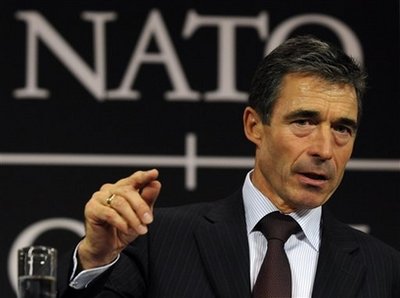 NATO Secretary-General Anders Fogh Rasmussen today denounced charges by the chief of staff of Iran’s armed forces that NATO was risking a world war with plans to put Patriot anti-missile systems near Turkey's border with Syria.


“I completely denounce these (Iranian) allegations. We have made clear right from the outset that the deployment of Patriots is a purely defensive measure,” Mr. Rasmussen told a news conference in Brussels. “We are there to defend and protect our ally Turkey. We have no offensive intentions whatsoever.” (Reuters, 17 December)


Rasmussen added he believed the only people who might be concerned about NATO's deployment of Patriot missiles were “actors that might have silly ideas to use their missile capabilities for offensive purposes.”


“But I hope that the fact that we have deployed Patriot missiles in Turkey can act as an effective deterrent so that no one would even think about attacking Turkey,” Rasmussen said.


Maj. Gen. Hassan Firouzabadi, Iran's army chief of staff, said on Saturday that deployment of Patriots on Turkish soil was “meant to cause a world war.”
The United States, Germany and the Netherlands are sending a total of six Patriot batteries to Turkey.

Six odd batteries of Patriots on a 750 kms border will hardly make a difference, it is just a cosmetic NATO warmongering gesture to back-up the fractured Turkish body politic and luke-warm military which has ZERO enthusiasm for a direct contfrontation with Syria, which will drag in Iran and Russia for sure.

On a comparative analysis, the Zionist military had 13 batteries of Patriots in a chicken coop area of Gaza and Southern Occupied Palestine to deal with mostly primitive 122mm GRADS fired in minute numbers, Gaza conflict theatre is about 250 times smaller than the Syrian-Turkish border and mostly mountaineous and harsh terrain.

These Patriots have less than zero chance of intercepting the highly sophisticated and wide array of modern missiles, not to mention long-range low trajectory artillery that the Syrian military has in its growing arsenal as Russia steps up deliveries. The numbers in Syrian missile force are so large that they can overwhelm anything NATO or US can deploy, not to mention the mega-Iranian strategic missile force. Syrian artillery forces are the largest in the Arab world and even according to open sources like Janes, IISS and SIPRI boast over 6000 artillery pieces and 4800 tanks. 3 batteries of failed Patriots (they failed to intercept even a single of Saddam's primitive SCUDs even according to Congressional GAO post-war evaluation studies,see link below).

Turkey will do nothing, but just arm the Salafi terrorists with Saudi and Khaleeji money and sit on the fence and watch the daily slaughter. There is no way that Assad will fall or any chance of NATO overt intervention. The Turks have already seen the deadly effectiveness of Syrian SAM systems, when their most modern Recce RF-4E Phantom was blown out of the sky by the Syrian Air Defense Force Pantsir-S1 (SA-22) system. The Syrians have over 50 Pantsir S1 batteries alone and most likely Russia will deploy S-300 or 400 in Tartus to protect its interests. The Russian bear and the Iranian lion are not about to walk away from this dogfight with a Turkey.

WELL SAID BROTHER !may the ALMIGHTY AWARD YOU WITH MANY EXTRA DAYS IN THIS WORLD!!

I finally find the person to answer my questions! Why do you think that deployment of six "odd batteries of Patriots on a 750 km border" was meant to start a "world war?" If you are not familiar with that analysis, please read the analysis offered by Iran's armed forces chief of staff posted on this blog on 15 December. Thanks.

I think the more importnat questions that needs to be asked is how come Turkey is treated as a second class NATO patsy and not given Patriot missiles or state of the art weaponry of its own? Turkey needs adult NATO supervsion from the US, Germany and Holland to look after its fragile security. Just proves that Turkey will remain a Turkey and not allowed to soar either in EU or NATO! LOL.

Dear Nader, the statement by Firouzabadi is stating the obvious, if a shooting war on the Syrian-Turkish borders takes place and these 6 odd NATO batteries are involved and result in the deaths of US, German and Dutch military personeel, then obviously there will be a escalation of the conflict and NATO will be invoking The principle of collective defence Article 5. This would then become a "global or international" conflict. So far NATO has resisted direct involvement but the Islamist imbecile Erdogan and his Saudi sponsors are goading it into a wider suicidal conflict.

Turkish military is not very keen for a major conflict, considering the state of their poorly maintained equipment like antiquated M-48A5 tanks and M113 APC deployed on the Syrian frontier. From a closer analysis, the Turks seem to lack even counter-battery radar or COBRA systems and would need massive NATO assistance. I think the Turkish reluctance is quite obvious. Turkish military has internal problems with over 300 officers in jail for coup and sedition charges. The airforce is incompetent and unable to tackle the Syrian AD systems as the shootdown of the RF-4E clearly demonstarted their ELINT weakness. I am very familiar with the Turkish military and can confidently state that they, or the economy and politicians are not in a position to get into a sectarian based civil-war in Syria with 20 million Alevi-Shias living in Anatolia, not to mention the restive Kurds who are waging a successful insurgency in Southern Turkey.

Hopefully, Iran, China and Russia's position will dissuade any further miscalculation. This statement by Firouzabadi was meant as a shot across the bow warning of potential spill-over of this conflict.

@anon 7:10
A very interesting point.
Do you think that would be the case if turkey didn't deny the Armenian genocide and somehow managed to solve its Kurdish problem?

Please repost your last. Sorry the delete botton is too close to the publish button.

Mistakenly deleted comment by anon:
Jabbar, I think your points are valid, Turkey is still viewed as an uncivilized violent barbaric nation by Eurpoeans, the Armenian genocide and suppression of Kurds, several military coups, invasion of Cyprus, suppression of media, execution of elected Presidents like Adnan Menderes, corruption, military instability, violation of human rights etc have blocked its entry into EU and Turkish military is considered cannon fodder and given NATO hand me downs like 1950's M48A5 tanks etc. The Islamic nature of AKP Erdogan government and its close ties with Wahabbi/Salafi regimes in Saudi, Qatar and the Persian Gulf petro-pimpdoms maye be another problem.

Even Iranian Artesh, even now has upgraded M-60A1, the most modern US tank in the 70's ordered by the Shah along with British Chieftans (Shir-e-Iran). Iran has been able to update its US weapons despite a total embargo by America. Iranian M-60's have laser range finders, Blazer type ERA, NBC kits, and secure communication systems etc.

Turkish military is very low quality in comparison and its conscripts are largely uneducated Anatolian peasants who can not even maintain basic military equipment like the standardized G-3 rifle. Most NATO analysis of Turkish military capability is very poor, particulrly their combined arms operational skills.

In the 70's Iran, Turkey and Pakistan were merged into CENTO alliance by US and by all objective assessment Turks were considered the most low-skill of all three nations. Iranians with their ultra-modern weaponry like F-14A, F4E Phantoms and M-60 tanks, Mk5 Frigates and La Combattante missile boats etc were considered the most advanced even then. The skills of Iranian military personnel particularly the Hamofars (technicians) was one of the reasons for post-revolutionary Artesh being able to maintain its US and European weapons systems. Turks are considered very primitive by most NATO forces and are excluded from top-sectret projects and intelligence, even from joint NATO air exercises in Northern Europe, Cold Lake, Alberta- Canada and Nevada US. Turkish F-16's are also stripped down versions. Just proves that being a puppet does not guarantee acceptance but only contempt.

The body of your argument does not support Firouzabadi's assertion. May I suggest that it would be as strong an argument to say that the general made a mistake uttering those words, and I hope he will not be put in a position again to make such proclamations on behalf of Iran's armed forces. It's not just a matter of being embarrassing, these comments are wrong and more importantly very dangerous, helping to isolate the country even more. May the cooler heads prevail in that region!