Israel behind the Connecticut school shooting--Kayhan

Kayhan ran this on its front page yesterday: "The footprint of Israel in the mass murder of American students". The fine print reads "US senators and politicians reveal". 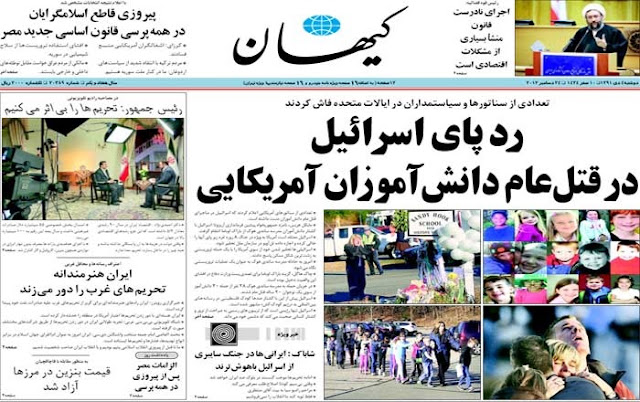 Kayhan is one of two newspapers in Iran whose editor is appointed directly by the supreme leader Khamenei.

The significance of this title is that it comes on the same day the Iranian "press court" found the reformist "Shargh" newspaper "guilty" of publishing "lies" and defying state directives by publishing information on "sudden" fluctuations in the exchange and gold market (1).

"Shargh" headline, "the return of 1,000,000 toman (gold) coin", was noting a hike in gold prices in Iran at a time when global gold prices were trending down. The paper was stating the "fact" that gold prices (sold in coins in Iran) had returned to record prices set in recent past when the Iranian currency was in free fall. 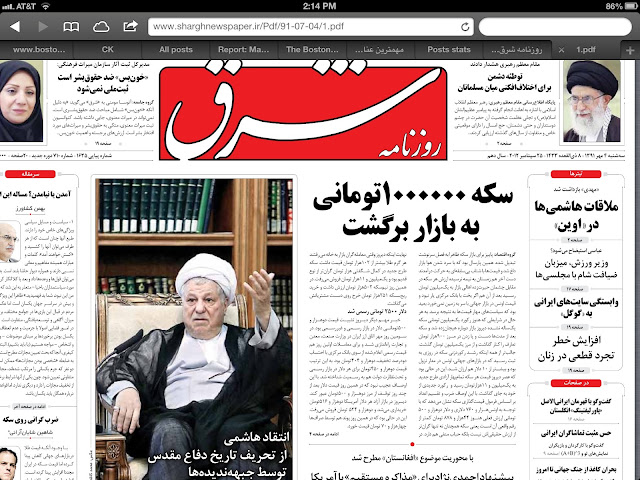 In a country were the regime claims piety, derived from its religious core beliefs, one would expect that blatant lies and misleading statements would have no place, but nothing could be further from the "truth" in today's Iran. This Kayhan headline is a reflection of a deep seeded and pervasive "culture of lies" and deceit which characterizes the entire Islamic republic apparatus.

The regime seems obtuse when it comes to the impact of this constant unapologetic lying on the image of the Iran and the Shiite Islam that it claims to represent.

Iran has become the "چوپان دروغگو" of the world which no one trusts anymore, event when on occasion it might be telling the truth.

US is a land of murderers and gun-toting freaks under Zionist control so anything is possible. The Zionist 5th column could well do such evil to sow even futher dissent in imploding US by setting the NRA nuts against the others. Torture and brutality are quite the norm. Wonder why this funny blog does not post real news that impacts on the respressed Iranians living in US torture hell?

Daryoush Sarreshteh , an Iranian national and former mayor of Tabriz, died from heart attack days after he was investigated by the customs officers in Dulles Airport, Virginia after a long absence on his way back from Tabriz, Iran. Sepideh Sereshteh, a nurse in Falls Church, said that they had treated her father like a dog and killed him.

and you're hilariously ignorant and quite the fool to make such a comment.
Iranian-Americans are living well in the USA.


take your lies and propaganda and climb back down into your well.

Take your hasbara propaganda somewhere else. Iranians have been widely discriminated against in the US POLICE STATE and now even the Iranian government has a travel advisory out after the torture, jailing and murder of many innocent and elderly Iranians by racist and savage US customs and police thugs. Many Iranian academics have been arrested on trumped up charges by American savages.

Iranian woman released from US prison after 5 years. Iranian national Shahrzad Mir-Qolikhan, who has spent five years in US detention on false charges. It is now normal practice in US to detain Iranians and other Muslims without charges.

Sharif University calls arrest of Iranian professor by U.S. "hideous" and ... Tehran's Sharif University of Technology, the employer of an Iranian academic. Iranians are now routinely ab used in US and now mostly academics supportive of Iranian government are targeted.many Iranian Professors have been barred from teaching in U.S. Prisons or held on trumped up charges.

US is a vile and violent cesspool that is now imploding and seething with greater hate and violence as its bankrupt economh collapses due to lost wars and hubris. How long can the US beg from China?
www.payvand.com/news/12/jan/1288.html

If all the things you claim are true regarding the persecution of Iranians in the US,then who is to blame for the negative attitude of Americans towards Iranians?
Don't you believe that the Islamic government has contributed towards that bigotry that the Americans hold against us,when they tell some of our people to shout "Death to America" in their slogans?
Surly all the blame can't be directed towards the American people only but also Iranians towards all the ongoing negativity towards us?

no wonder no one is willing to give them nuclear Technology ...

Shahrzad Mir-Qolikhan was imprisoned on the same charges for which she was convicted and imprisoned in Austria.

you and PRESS-TV are full of it.

@anons 7:12, 9:09, 8:48
None of your comments are relevant to the huge lie posted on Iran's leading newspaper. Other subjects are covered elsewhere.

Why are Iranians to blame for US IGNORANCE & RACISM? The FACT is that the US and UK had been ripping-off Iranian OIL for over a century and overthrowing elected democratic governments and training SAVAK and other tools of oppression. The US still is engaged in a covert war with Iran, sanctions and has frozen over $40 BILLION (currengt value) of Iranian assets, murdered millions by supporting Saddam, wars, assassinations. SO WHO IS TO BLAME? US must apologize to Iranians and pay reparations from its deadbeat economy.

I see what you mean.But haven't you thought that Iran since the past seven years has made more money from the sale of oil due to high prices than the past 80 years.This amounting to over trillion dollars which for some strange reasons have not been accounted for.
Also bare in mind that the so called democratically elected government was chosen by the Shah and approved by parliament.And if you know the 1906 constitution of Iran,then you will know that the Shah or any Shah had the right to dissolve any current government of the time.In the constitution of 1906 it says that the Shah is the commander in chief of the armed forces and has right to question his prime minister.One fundamental error the prime minister of the time performed was asking for the closer of parliament which was beyond the constitutional powers of any prime minister.
Another myth is that the West implies that Iranians are incapable of internal security operations and must be run by foreign agencies.This myth gives to much credit and prestige to foreign security services which they don't deserve.Iranians are capable in running their internal affairs no matter what government is in power.
SAVAK was an internal security service which was modeled on the FBI.This security service is still being run in Iran but using a different name.
Are you implying that oppression has stopped in Iran since 1979 or is continuing or has even increased?
The assets were frozen the day the American embassy was taken over in 1979.By encouraging people to shout "Death to America"for over 34 years,do you really believe Iran can get its $40 billion (current value)back from the US establishment?
If we want to play blame games,then Japan and Germany should still be lying in ruins as well as launching attacks on US citizens to this day.
I would say the blame lies on both sides.Therefor both side should sit down and act like adults to resolve the crises that is effecting Iran more.