Iran-IAEA Meeting Ends With No Agreements

The Two Sides to Meet Again on 16 January 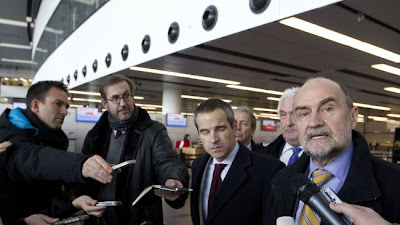 Iran and the International Atomic Energy Agency (IAEA) today held a long anticipated meeting in Tehran but failed to reach an agreement on a visit by the agency’s inspectors to Parchin military base, suspected by IAEA to be the site of a nuclear weapon research center. The two sides agreed, however, to meet again on 16 January.

These idiotic mullahs are only making life harder for ordinary Iranians by playing games with the west. They either need to test a nuke like North Korea, India and Pakistan and become immortal and untouchable or face a python economic squeeze that will choke the life out of Iran. It is also interesting that the impotent UNSC met over DPRK's rocket test and did nothing, not even a rap on the knuckles let alone sanctions. It once again proves that the US and its toady hyeana coalition only understands strength. North Korea has made it an artform of giving US the proverbial midde-finger on a regular basis and expose the paper tiger nature of American standing in the world.

Iran should quit playing games and make its position clear, because this nuclear issue is a sideshow, the real issue is that Iran is thorn in US/Zionist regional agenda.

With respect, I don’t think there was ever an expectation for a formal agreement at this stage of the negotiations. I find the headline for this posting rather pessimistic and mildly negative - certainly not in line with the major western news agencies who have expressed optimism that a deal will be reached.

PS. Has anyone tested this new format with internet explorer 9? Talkbacks not visible in IE9 with ok in Chrome and Firefox

Thanks so much for the heads up on IE9. Appreciate your help and continued support of this blog. I wish you could post articles as well.

The title might be negative, but was actually true. This is my understanding: the IAEA team pushed for permission to visit Parchin, the only subject that the two sides needed to come up with an agreement during the talks. Other issues discussed were not the type needing concrete agreement.

Having said that, I am still optimistic that some agreements could be reached in January. Both sides need it: IAEA to show some progress after five inconclusive meetings this year with the Iranians, and Iran for showing some flexibility to avert tougher sanctions and possible military conflict.