Scene of Protests Against Alleged Killings of Afghans 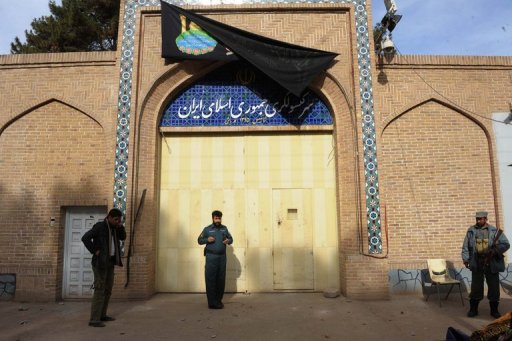 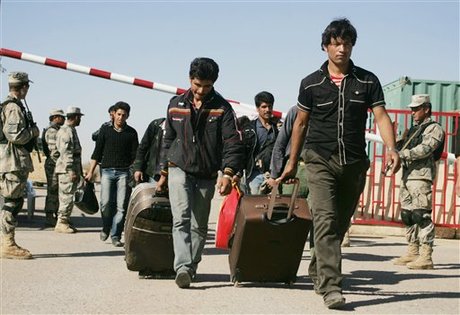 
Afghan protesters threw rocks and broke consulate windows and the police had to fire warning shots to disperse the crowd. The Afghan demonstrators were protesting the alleged killing of 13 Afghan emigrants at nearby Islam Qala border crossings three months ago. The protesters were also demanding that Iran return the bodies of the slain Afghans to their families in Afghanistan.
Iran has called the reports of killings of Afghan immigrants by Iranian border forces as “false and baseless.”
Photos:
Top: Iranian Consulate General building in Herat, western Afghanistan (AP)
Bottom: Islam Qala border crossing (AFP)

Iran needs to deport the 3 million illegal Afghans, shut off aid and seal the eastern borders as Afghanistan since centuries is a unstable basketcase and lawless land, even as an eastern province of Iran. US/Saudi and Pakistani interference in Afghanistan will get worse as they seek to keep it weak and use it in their Russia-China encirclement and containment new "great game". It also serves as a terrorism base for Balochistan-Sistan, drug smuggling and regional destabilization agenda.

During the 8-year Iran-Iraq war, Afghan immigrants filled important jobs vacated by the Iranians gone to the front, and many Afghan citizens also volunteered to fight Saddam to defend Iran, and many lost their lives. Since then many Afghans have worked hard on jobs many locals did not want to do. The Iranians need to recognize the contribution by thousands of Afghans in the economic life of the country and be grateful to those who fought and lost their lives defending Iran.

Now, even if Iran wants to deport Afghans without work permits, they can and should do so respecting the human rights and dignity of Afghans and their families. Many Afghans are separated from their families when deported (many cases of Afghans having children with residency permits who are deported, for example).

Killing job seekers is not acceptable no matter the circumstances, and I hope the reports of killings are not true. But if accurate, the Iranian government needs to bring the murderers, even if they are border guards, to justice.

IRAN'S GOODNESS TO AFGHANISTAN OPEN EVEN TO KIDS!

-FACT ONE-no Nation has been so helpful to its neighbor than IRAN has done to Afghanistan and ay editor or commentator capitalizing on the current issue of killed Afghan immigrants,to demonize the Regime in Iran is committing intellectual dishonesty!!.
-FACT TWO-Afghanistan has been known as the worlds drug capital.but worse still is the fact that IT has long been a breeding ground for ISLAMIC extremism a malady that invited the US to come and wage a merciless war there and make a semi occupation all in the name of quashing extremism and fanaticism.THESE TWO things,extremism and drugs has had an impact on the other side of the boarder[IRAN]
-FACT THREE- IRAN is a very responsible NATION especially its handling of the refugee from HER NEIGHBOR and its war on the drug trade-all have been acknowledged even by its enemies!.
-FACT FOUR- IF IRAN REMOVES AWAY its contributions [in all fields]to the AFGHAN PEOPLE ,NO NATION WILL AFFORD TO FILL THE VACUUM!.

Iran should help the Afghans, as the Afghan helped Iran and its economy for so long. The kind of sentiment, or racial supremacy nonsense, repeated in a comment here advocating deportation of all Afghans and sealing the eastern borders is what should be rejected. Back to the issue at hand on this post: there are allegation of 13 Afghan immigrants murdered by border guards. If true, the murderers should be brought to justice.

Nader, have you been living in a Taliban cave. The Afghan ingrates, specially the US/Pakistani ISI supported Taliban elements have been killing Iranians for over two decades. Only in 1998 Taliban forces killed 10 Iranian diplomats and an Iranian journalist after they captured Mazar-i-Sharif and attacked the Iranian consulate. The Afghan have been killing Shias, Hazaras and other minorities at ISI behest.I would also like to know how Afghanistan has "helped Iranian economy"? It is only illegal Afghan labour that may have helped in the Iranian construction sector, while Iran has doled out over $2.5 BILLION in aid to the ungrateful Afghans and also provided ELECTRICITY, GAS, Consumer goods, engineering sdrvices, construction of dams, and other assistance, particulatly to western Afghanistan. It also still supplies the mostly Hazara-Tajik Northern Alliance military assistance. Iran's contribution to Afghans is immense. The old British saying holds true today: YOU CAN RENT AN AFGHAN BUT NEVER BUY ONE. They are unruly and untrustworthy by nature. Ask the Brits and Russians about their experiences.

MR NADER with due respect ,why do you suppress information?,you are fond of killing two birds with one stone!-INDEED MAKING A FACTUAL REPORT BUT AT THE SAME TIME DENYING THE READER ANY OPTION TO make independent choices!!--And this is how you kill your birds !

In this report you are quoting sources about the killing of the Afghan migrant-here the story is open ,the defenseless immigrants were killed,and in fact you are demanding justice!,BUT IN REALITY we are seeing a picture of an irresponsible administration in IRAN,a regime that is fond of killing innocent defenseless immigrants,a regime that is thankless to human contributions from the Afghans-indeed a thankless regime that commit murder!,in the name of sentimental and racial supremacy nonsense!

-question one-YOU SAY that the Afghans, helped IRAN and its economy!-Could you please OFFER US AN in-depth analysis to back-up your claims that it is the AFGHANS that helped IRAN and not vs-verse!.

-question two- many people and sources acknowledge that ,no NATION has been helpful TO its neighbor than IRAN has been to AFGHANISTAN,and we can all see IRAN'S contribution to the rebuilding of its battered Neighbor VERY CLEARLY -SO BY SAYING IRAN SHOULD HELP THE AFGHANS,JUST WHICH HELP DO YOU FEEL IRAN SHOULD EXTEND TO AFGHANISTAN that is missing in the list of economic and humanitarian activities b/tween the two NATIONS!?.

-question three- Are you sure and serious that by 'HELPING ' as you propose,the regime wont invite condemnation from the opposition abroad as yet another waste of resources neglecting its people and helping foreigners[like the case with Palestine?]

-question four- why do you deliberately refuse to show your readers IRAN HELP TO THESE PEOPLE-the are so many Afghans in Iran currently living,working and earning their living as if they are not refugees as the government has offered the the environment for them to feel free in the spirit of ISLAM AND GOOD NEIGHBORLY HOOD? !.