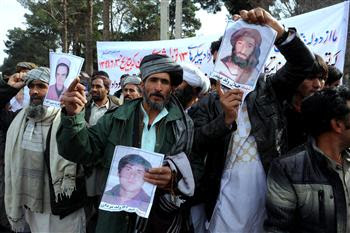 Hundreds of angry demonstrators tried to storm the Iranian consulate in the western Afghan city of Herat on Sunday, protesting alleged killing of Afghan immigrants in Iran. The crowd threw rocks and broke consulate windows before Afghan security forces drove them back by firing warning shots into the air. (AFP, 9 December)

The protesters claimed 13 Afghans who had crossed the border into Iran illegally for search of job in September were seized and later shot dead by Iranian security forces. They demanded that the Iranians return the bodies to their families in Afghanistan.

Photo credit: Afghan men shout anti-Iran slogans as they display pictures of their family members who have allegedly been killed by Iranian forces. Herat, 9 December 2012. (AFP PHOTO/ Aref Karimi)
Posted by Nader Uskowi at 10:53 AM

@BMA
Aside from the fact that the IR of Iran invented violence against embassies, these people are less than two hundred villages from a place called "Islam Ghaleh" (BBC) who were demanding the return of the bodies of 13 afghanis from that village who were shot by Iranian security and the Iranian government refuses to return their bodies. The return of the bodies would apparently contradict the Islamic republic story line that they don't know anything about any shooting.

As far as afghans being a source of crime in Iran (the same claim made against most immigrant communities around the world and throughout history), that happens to be the official line of anti afghani racists who generalize about these people, the majority of whom are there to work and provide for their families. They even have to bribe islamic republic officials to get their children to school, even if they happen to be in the country legally with work permits.

No condoning violence for any reason and against anyone, but Iran needs to stop labeling people terrorists based on racist prejudices, then hide behind pro-afghan and pro-Muslim slogans.

I agree with Jabbar Fazeli on this one.The regime invented attacks on embassies and are receiving their rewards.
The biggest criminals in Iran and the region are the members of the regime.They practice this disgusting art of not returning bodies until victims families pay a heavy ransom.
The biggest hypocrites without a doubt is the regime.

Afghans are worthless ingrates and ignore the fact that Iran has given refuge to over 3 million since various invasions of pathetic Afghanistan. Iranian aid and energy supplies are keeping Herat, Mazar-e-Sharif and western Afghanistan (former Iranian provinces)from collapsing. Iran needs to seal off its eastern borders completely and cut-off all aid to Afghans and Pakis, both are a nuisance and Taliban homelands.

I agree,all aid to Afghanistan should be cut off.But also all aid to Hezbollah,Hamas,Lebanon,Assad's Syria,Sudan,Iraq and other bloodsuckers should be cut off at the same time!
You forgotten how the Palestinians supported Saddam when Iraq attacked Iran?
Shows how pathetic and worthless they are to Iran.Yet Iranian people are paying a heavy price because of those so called allies.

I totally agree. Iran does not need to support these worthless ingrates and the Arab leeches who have backstabbed Iran at every opportunity. In reality, the adoption of the desert bedouin Arab religion, albeit we modified it to suit our rich culture has been a disaster for Iran. Islam in its cuurent distorted form has regressed Iran by at least a millenium and setback all socio-economic and cultural progress. Iranians are Indo-European people and if unleashed from the religious shackles have the most potential in the region. Most Iranians and sane people want a secular, progressive and independent Iran. Enough of mullahcracy and ignorance. Hopefully, the "spring" will come to Iran by next Nowrooz.