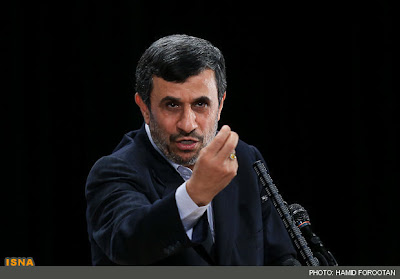 Ahmadinejad made the comments in Mashhad during a ceremony to startup development project in Khorasan province. His remarks were the most candid description yet by a senior government official of the rampant corruption in the country and how a small band of “businessmen” and current and former officials, with strong ties to state-run financial institutions, could accumulate so much wealth in so little time.

“300 people in the country have pocketed 60 percent of the nation’s cash and are not returning the monies (they owe)… Under different pretexts, they have taken out loans to import (commodities), but they have not repaid the loans, even though they have sold the commodities and have pocketed the monies,” Ahmadinejad said. (ISNA, 14 December)

To read the text of Ahmadinejad’s speech in Farsi, please click here.

No doubt the 300 people are the members of the regime and their stooges.
And the remaining 40 percent of the nations cash is controlled by Khamenei,Rafsanjani and the remaining gangsters of the Islamist theocracy.

I don't see any reason to conflate corruption and Islam.

Oh really? Why doesn't he simply name these 300 people? Or at least one of them? Why are there 300 criminals going unpunished because Ahmadinejad is protecting their identity?

I guess many Iranians involved in business and many Iran watcher can name a number of those people. Doesn't take much to identify them, just look around to see who has become multimillionaire in a short period of time and all they had to show for their genius were their connections to state-run banks and top government officials. The importance of Ahmadinejad's remarks were not that type of information, we knew that; the importance of his remarks was the fact that it was coming from the president of the Islamic Republic. Ahmadinejad became the most senior Iranian official to offer the public a description of how the corruption works in the country. And of course this is just one facet of corruption, there are many other forms of corrupt practices that I hope he would reveal as well.

This is not rocket science,it's a well known fact that the type of dregs in power today are a bunch of OGHDEHE and DOZD which have taken over and holding the country to ransom.
There should be no excuses made up for these low life vermin.

The mullahs don't seem to have much problem combining the two. :D

As if he is a powerless bystander, why don't he correct the issue already as the president of Iran.