Talk of Civil War Threatens Stability in Iraq and Kurdistan

Iraq and the autonomous Kurdistan region are on the brink of a war, the Washington Post reported today. The opposing armies are massed on either side of the contested border. Even though the leaders in Baghdad and Erbil are negotiating a compromise, but their armies could be provoked into battle.

The latest issue dividing the two sides is Exxon Mobile and the contract the oil giant has signed with the Kurdish autonomous government to begin exploration for oil in blocks situated in Kirkuk region, a disputed territory at the heart of the current military standoff.

“The prime minister has been clear: If Exxon lays a finger on this territory, they will face the Iraqi army,” said Sami al-Askari, a member of parliament and confidant of Prime Minister Nouri al-Maliki. “We don’t want war, but we will go to war, for oil and for Iraqi sovereignty.” (The Washington Post, 18 December)

“We do not want war,” Masoud Barzani, the leader of the Kurdish government said in a recent speech to Pesh Mergas on the front lines. “But if war comes, then all Kurdish people are ready to fight.”

Going to war for oil is a familiar concept in the region. In this particular case, however, going to war for oil could lead to a civil war between a central government dominated by Iraqi Shia and the Kurds, a development that could destabilize the region, from Iraq to Turkey to Iran, and to Syria already in the midst of its own civil war.

On Thursday, with American assistance, Iraqi President Jalal Talabani, a Kurd, brokered an agreement between Maliki and Barzani to form a committee to create a solution for security in disputed areas. But neither side has committed to military demobilization. Meanwhile, Talabani is in a coma after suffering a stroke on Monday. 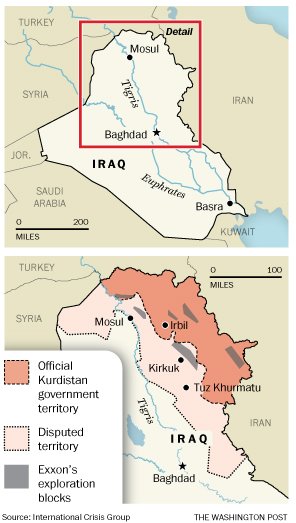 This was a no-brainer and most of the adults had this figured out ages ago as the whole US/Zionist agenda was OIL. The carve-up and destabilization of the Iraq and the wider region is part of this EXXON-Mobile pipelinestan agenda. However, the ensuing chaos will not be in US interests and the dumb Kurds are mere pawns and patsies who will suffer again. Iraqi state simply can not allow a defacto partition and massive oil theft, smuggling, gunrunning and PKK terror. The Kurdish province is now the nerve center for CIA/MOSSAD activities in the region and other regional players are not happy.

not only would the Kurds have the ability to repulse such an attack, but Exxon could hire a better military force than Iraq could field.

Are you really seriously challenged, both geographically and rationally that you do not know the history of the Kurds or the FACT that the tiny wedge of Iraqi Kurdistan is LAND LOCKED and no-one Exxon included, can build a pipeline without passing either Iraq proper, Iran or Turkey. Secondly, Kurds including Massoud's illiterate father, Mullah Mustafa Barzani made fatal mistakes in the past and then the so-called Peshmerga were wiped out by Saddam's military and subjected to mustard gas dinner as well. Also, the current Iraqi army is 90% Shia and its government is very close to Iran so I don't think the Kurds would last more than few hours before running to the mountains again and being caught in a hammar and anvil with Turks breathing down their necks. Even Saddam's battered forces took exactly 8 hours to rout the Kurds.

I suggest you stick to violent video games and leave the discussion to adults on this blog. You seem peculiarly ignorant.LOL.

US is too damn clever...divide and conquer, anywhere and everywhere, marching on!

and what's wrong with passing a pipeline through Turkey, friend? are you not aware that the Kurds have spent years cementing ties with Turkey concerning oil and gas rights in Iraqi Kurdistan?

last i heard Saddam was pretty much a dead coward pulled out of a hole in the ground and hung while the Kurds and Peshmerga are alive and doing just swell.

any time that the Iranians want to send troops to fight with the Iraqi army in an move on Kirkuk, they're more than welcome to see what comes out of the sky and lands on them.

may I suggest that you're not much of an informed adult and in no position to comment on the ignorance of others.... friend.

Buy a newspaper and if you can't read, have a "friend" inform you that Turkey is at war with the Kurds for the past 50 years and why would it allow a pipeline to fund a war against itself so that with oil revenues the Kurds can buy better arms and fund their terror campaign in Anatolia? LOL.

Yeah,so clever that it has bankrupted itself with 68 million people on foodstamps and 20 TRILLION budget deficit with even college students living homeless on streets. It is "marching on alright", but to where perhaps you only know better!LOL.

THE GOOD NEWS IS THAT -what goes arround always comes around and it is TRUE SOMEDAY THE CHICKEN WILL COME HOME TO ROOTS !!WE SHALL NOT ALWAYS HAVE A 'united' states of america!!

Harvard demographer Juan Enriquez calls the future unravelling of America as the UNTIED STATES OF AMERICA with Blacks and Hispanics all carving up their own territory and gun-toting rednecks declaring independence near the Canadian frozen tundra. Hispanics are already on a RECONQUISTA.

here's something for you to read, habibi.

"..... Turkey is setting its sights on an unconventional alliance with the Kurdistan Regional Government (KRG).

This is a gamble Ankara is willing to take, despite the potential implications it could have for Kurds on its own territory. Indeed, as recently as 2009, Ankara had a very different view on the KRG, going as far as to label its leader, Masoud Barzani, a “bandit” who was turning a blind eye (at best) to Kurdish militants using Northern Iraq as a base to launch cross-border attacks on Turkey. The Kurdistan Workers Party (PKK) has been fighting the Turkish government for more rights for decades.

So when Ankara began announcing a series of bilateral deals with the KRG (deals that went above Baghdad’s head), everyone’s first question was why would Turkey want to align itself with an Iraqi Kurdish leadership that is clearly making a play to create a sovereign Kurdish state?"

read the rest of it.