Netanyahu: Iran Nuclear Program Must Be Confronted in 2013 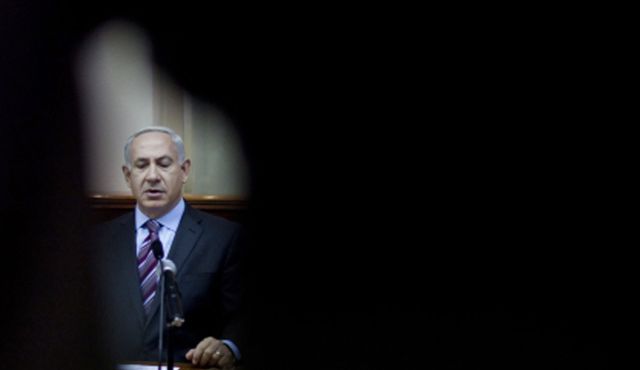 Israeli Prime Minister Benjamin Netanyahu told reporters today that he is sticking to red line he laid down in September at U.N. Israeli experts have said Iran could have enriched enough uranium to produce just one bomb by the spring or summer of 2013.
Iran is getting ever closer to being able to build a nuclear bomb and the problem will have to be confronted in 2013, Netanyahu said today. (Haaretz, 10 December)
“I made clear that once Iran crosses that enrichment threshold, the chances of us effectively stopping Iran's nuclear weapons program would be reduced dramatically,” Netanyahu said. “Iran is two and a half months closer to crossing this line and there is no doubt that this will be a major challenge that will have to be addressed next year.”

“The sanctions on Iran are hurting the Iranian economy. There is no question about that. But we have not seen any evidence that sanctions have stalled Iran's nuclear weapons program,” Netanyahu said. “Israel is more capable of addressing this challenge than it was when I took office four years ago.” (Haaretz, 10 December)
Photo credit: Israeli Prime Minister Benjamin Netanyahu (AP)
Posted by Nader Uskowi at 1:30 PM

What Mr. Netanyahu fails to understand every time regarding the balance of power with iran, is that every step the IDF makes forward in its offensive capabilities, also means a step ahead in Iran's defensive and retaliatory abilities. It doesn't need to be exactly on par with the Israeli war machine since it will be defending its home... just a look at its air defense assets alone should (and does) make commanders think twice about taking unilateral action... and the political board has always been divided 50/50 on that issue, precisely because of fears of an aftermath. All posturing and empty talk again, the exact same way it has occured on a regular basis on both sides for years now... direct confrontation is in nobody's favor in the region, and everyone knows it, even the harshest bullies.