Oil Under the Tarmac 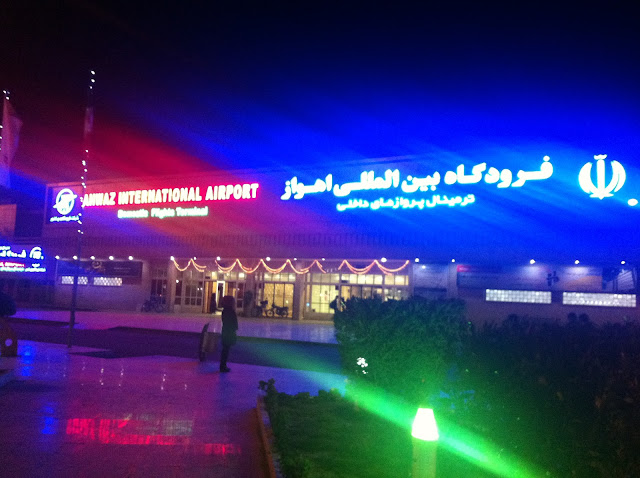 Iranian authorities plan to relocate Ahvaz airport after discovering an oil field under the runway. Ahvaz is the capital of the oil rich southern province of Khuzestan.

The ministry of oil will acquire the airport and a new airport will be built 15 km (9 miles) outside the city, the director of Iran’s Airports Organization told the state TV. (IRIB, 28 December)
Photo credit: Ahvaz airport terminal, 2012 (wikipedia)
Posted by Nader Uskowi at 9:01 AM

How unfortunate that of all the free space it had to be beneath the airport. You have to question, is it really worth demolishing such a vital structure for the purpose of getting to the newly found patch of resource. Correct me if i am wrong, but Iran seem unable to extract their own oil and gaz, even if it is on land, and foreign companies are afraid to invest into such projects. Do they know for sure that they will be able to benefit in the long run despite tearing up a fully functioning airport and having to build one all over again, and does the extraction of oil and any future profit from it outweigh the cost of constructing a new one?

IS THIS TERRORISM TOO ON THE PART OF THE REGIME?-

In any free country the people living there would have a say in something like this, but not in Iran. Even the mayor of the city is appointed by Tehran were the decision to move the airport is made. Then they wonder why the have ethnic conflicts!

This move comes at a time of oil embargo; what is the regime thinks it can do with all that oil? oil production same (or up if you believe the regime), oil exports down, storage space running out, incompetent decisions abundant.

I don't believe a word those thief's are saying.There is some scam involved which the IRGC will be making a huge profit from.
The scam could be the land as well as the new construction project regarding the airport and infrastructure around it.
As for the oil,Iran can't even sell the oil it is presently producing.

It is now that one is introduced to a new concrete understanding regarding all those times one heard politicians use the much renowned figure of speech "...they are floating on a sea of oil & gas!..." This report makes it that much clearer.

This is definitely an opportunity for regime insiders to make fat personal profits by wasting state money on unnecessary public works projects. Iran is covered with examples of such waste driven by rampant official corruption and incompetence. Announcing such an illogical project in this current economic crisis, and in the midst of oil export sanctions is just the latest example of the regime's malicious greed, rampant stupidity and total detachment from the stark realities of Iran's many economic problems.

BENEFITS OF RELOCATING THE AIRPORT AND GETTING THE OIL!

-THERE are some people who think that whatever is going on in IRAN IS SIMPLY NOTHING BUT OPPRESSION!!-this is a disease called negative attitude ,and such a group of people,if given the chance to rule,can come up with one hell of A dictatorship!now lets have a quick LOOK AT the benefits that pushed the GOVERNMENT TO COME UP WITH THE DECISION.

-benefit one-With the relocation of the airport the Iranian aviation authority will come with a modern and spacious one on the new site!.a plus in the aviation industry!.

-Benefit two-sanctions and embargoes are temporary challenges to a NATION.and these challenges can not hinder a government from its long term plans.IRAN being a NATION sitting on the second world's oil reserves deserves to take its position in the global oil trade.with this discovery and exploitation it seem the government aims to realize that dream.

-Benefit three-Iran in under sanction and this means no foreign firm will come to undertake the projects of drilling or planning and building the new airport.So this leaves the projects at the hands of THE HOME GROWN Engineers,who am sure are up to the job and these ventures will give them more exposure and expertise!.NOT BAD to a NATION with the highest number of universities in the middle east .

-Benefit four- local engineering companies will take up the job hence build a name for themselves! and very Soon will be invited to build airports in foreign lands.

-Benefit five-it is a vast project that will create jobs for the YOUTH and this cant be ignored by anyone with good intentions to the NATION!.

I think this just goes to show how far Iran's oil & gas / exploration & production industry is behind most of the world.

The vast majority of the world could drill & produce this oil without relocating the airport......sounds like another scheme for the mullahs and junior mullah wantabes to pocket some cash.

Thank you Anon 3:28 PM and Mehran Ghadiri for your very clear cut explanations.The regime is reaching its final destination in history and acts illogical in the eyes of the people.They are simply holding onto power to steal as much as they can before it all comes to a sudden end for them.
It is totally up to the Iranian people to get rid of these unelected parasites so that we can have a very bright future for the people of our nation.

Proves the point that IRAN IS LITERALLY FLOATING ON OIL!

http://www.youtube.com/watch?v=OnfV3-m85dE --- US sanctions put a squeeze on Iran air travel.