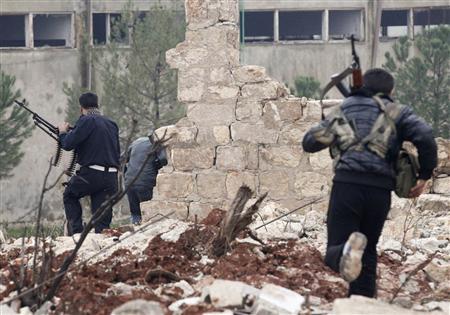 Russia sent warships to the Mediterranean to prepare a potential evacuation of its citizens from Syria, Russia's Interfax news agency reported today. Two assault ships, a tanker and an escort vessel had left a Baltic port for the Mediterranean Sea, where Russia has a port in Syria's coastal city of Tartus. (Reuters, 18 December)
Russia’s move came a day after the Syrian rebels seized the Yarmouk Palestinian camp just 2 miles from the heart of Syrian capital city of Damascus.
“They (the warships) are heading to the Syrian coast to assist in a possible evacuation of Russian citizens ... Preparations for the deployment were carried out in a hurry and were heavily classified,” Interfax quoted the government source as saying. (Interfax/Reuters, 18 December)
Photo credit: Free Syrian Army fighters run during clashes with forces loyal to Syria's President Bashar al-Assad. Ouwayjah village in Aleppo. 17 December, 2012.  (REUTERS/Zain Karam)
Posted by Nader Uskowi at 10:15 AM

The only right and lawful way to go about solving the conflict in Syria is by legal means. All parties must sit down at the table and have talks. You cannot solve the problems by military means, it's morally and ethically wrong. The concept in itself ough to be very easy to grasp for anybody, yet i see people (inlducing the owner of this blog) posting comments here favoring more war and killing, very odd thinking on their behalf. How can people advocate the irrational idea of having a group of governments trying to overtly push another sovereign government out of its own country by sending in insurgents, smuggling in arms to them, paying them salaries etc. It's so wrong on so many levels. And those people who show a liking to such moves do reveal how corrupt their own mindset really are. The future and fate of Syria should be decided by her own people without outside interference. We aknowledge that the population within Syria has grievances with its current leaders, whom should have adressed many of these grievances a time long ago. All the concerned political groups inside Syria must get together to come up with a political solution to this crisis. They eventually need to hold free and fair democratic elections, one that should be supervised by the proper agencies to make sure that things are in order and carried out right. If Assad gets the majority of the votes, a possiblity which cannot be excluded, then it means that his party has the right to stay in power and continue to rule Syria, but afterwards lots of things need to be taken care of to make Syria a better place for its own people as he has promised. If the majority of the Syrian population vote for another party, then that means that Assad and his colleagues will have to step down. And he has said that he is willing to hand over power to the political opposition in such a scenario, because the other party would clearly be the true winners due to the votes. It's really that simple.

http://www.youtube.com/watch?v=g-odgX2iQP8 --- Syria destroyed, infrastructure broken down by US & Allies.

The only way to treat regimes like Assad's and above all regimes like Islamic theocracy which is occupying Iran,is by force.
These people only understand and respect pure force.

The Russians have finally understood that Assad and regime cannot be saved and the only military move they will be making amounts to an evacuation of their citizens.
Islamic theocracies confrontational and bankrupt foreign policy in supporting Assad and Hezbollah/Hamas amounts to nothing but a small bag of beans as well as a large noose around the innocent and brow beaten Iranian nations neck.

Are you for real or under influence of Mayan cosmic (or comic in your case) forces? And who is going to instigating this "respectful force"? Get real dude and chill.

Preparing for evacuation and dropping off last minute military supplies.

Ha Ha Ha! The world is part of the cosmos in case you forgot!
As for "comic",that's applicable to the Islamic regime and to their stooges abroad chatting their usual BS on the internet.
The respectful force is of course the people of Syria as well as Iran who will soon get rid of the tyranny that is occupying both the countries.
So getting "real" should imply to someone such as yourself whose living in denial.

Yeah sure and replace it with a Salafist thug government that teaches its children to slit the throats of "heretics" like Shia, Christians and other minorities. You are one deluded cosmic freak. I am sure you are reading the Mayan calendar too for its divide "accuracy".LOL and then some.

Maybe it will be good learning for the West in a hard way, if they haven't learned from the consequences that followed their training of Osama Bin Laden and his camrades...

Terrorist from Syria will have chance to undermine Jordan and to cause prolonged troubles in Iraq and Lebanon.
The Kurds in Syria and Iraq will have good chances to advance their cause for a statehood and that will bring significant danger of disintegration for Turkey.

Based on previous events, where the West have managed to create the authonomous Kurdistan region in Iraq, the Alawites and Christian in Syria should also be entitled to the similar protection and because in the 1920s they had already separate entity.

Very good analysis A-F. I agree the so-called west and NATO are unleashing terrorists that they will not be able to control. This will make the Afghan "Mujahideen" look like boy scouts. The fictitious character "Osama" was a CIA creation too and now there are millions of Salafi murderous beheading "Osamas" and "al-Nusraa" terrorists roaming the region.

the Assads seized power in a military coup and they've lost power in just the way that they deserve.

they'll either cut and run or stay and die.... either is suitable.

http://www.youtube.com/watch?v=d1QxjVPdGp4 --- Planning for the Syrian endgame.

Who cares what they do as long one of the allies of the mullah regime is destroyed.It's a win win situation for the Iranian people.
Good riddance to bad rubbish!

Thanks very much for your solidarity and for your valuable enhancement of our efforts.
There is still possibility that events in Syria will bring a better scenario...