Iran: Patriot Missiles in Turkey to Cause ‘World War' 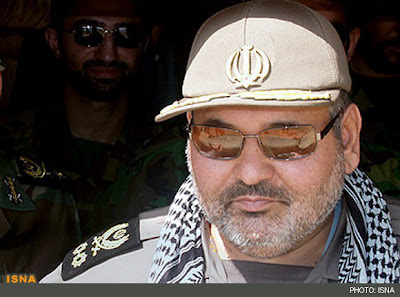 “Each one of these (deployed) Patriots is a black mark on the world map, and is meant to cause a world war," Gen. Firouzabadi said. “They are making plans for a world war, and this is very dangerous for the future of humanity and for the future of Europe itself.” (ISNA, 15 December)
U.S. Defense Secretary Leon Panetta signed an order on Friday to send two Patriot missile batteries to Turkey along with American personnel to operate them.
Turkey had requested the missile deployment to counter any Syrian missile attacks on its territory. Turkey has scrambled Syrian jets along its border with Syria and responded in kind when shells and gunfire from Syria have hit its territory.

"General" (JOKE) Firouzabadi,code name (BOSHGEH) LOL! has no control over his own fat belly let alone (thankfully) the control over future of humanity!
Maybe he should go back to his previous job with some extra long rubber gloves and see to the barn animals?

I donot believe it is a joke becuase the statemrnt comes from a fat person
I believe the PAtriot in Border Turkey-Syria is very serious can cause a war.
If Turkey attack Syria, Irtan and very possible Russia will defend Syria and attack turkey
The Turks are member of Nato, trhey ask Nato for help. The USDA and Europa must
enter in to the war
so we have a wortld war or a large reginal konflikt.

And how do you suppose Iran could possibly fight NATO?
Russia will not fight NATO because of Syria.
Just accept the fact that Assad and his regime are finished.

Fighting Nato is possible, NATI is weak; the Bunch of primitv afghan taliban fighting
NATO successfuly.
The Member of Nato are financial bankrupt, they have no money, additionaly
The EU because of Bad demographic donot have many soldiers and can not stand long time im battlefiled. no money, no soldiers


The US-Iran is always there hidden in Iraq and Afghanistan.

NATO is not "weak"! The US alone has 5000 nuclear warheads,60 nuclear subs,16 nuclear aircraft carriers,over 2800 ultra modern fighter planes,5000 cruise missiles.Iran will simply be leveled by bombing alone,without a single NATO trooper in sight.
Afghanistan had nothing to bomb,but Iran is a bomb rich country,no thanks to stupid ignorant and bankrupt mullah regime.

the general needs to be careful when he opens his mouth. His hasty and unthoughtful remarks has already been costly for Iranian diplomacy: Ahmadinejad had to cancel a visit to Turkey; difficult for him to meet with a country that has requested those Patriot missiles that could supposedly cause a "world war." I guess with this general does not have a solid grasp of international relations, in which he should not make such proclamations; or he does not have a firm grasp of military affairs, in which case he should retire sooner better than later!

IRANIAN GENERALS ARE VERY thoughtful and have a perfect grasp of global military affairs!!..what this humble general is saying is that -nato is too hasty in sending the patriots in TURKEY.SYRIA IS NOT AT WAR WITH ANY NATO MEMBER,SO WHY 'THE BOLD MOVE'?.

This is not what this "humble" general say! He said Turkey's request to have Patriot missiles deployed on its soil, and the U.S. agreement to send two batteries of the missiles to Turkey could cause "world war." This is not a modest observation, this is a radical, and I believe an absurd observation that the deployment of two batteries of patriots in Turkey could cause "world war." Probably his definition of a world war is different from its generally accepted use!

These so called tinpot "generals" that have no grasp of military and political affairs are the result of the Islamic regimes insistence of employing X fruit sellers and market stall traders with a twisted Islamist belief that have plagued Iran for 500 years and turned them into "generals".
None of these "generals" have been to military school.Just like none of the Islamic regime "politicians" and "diplomats" have real titles as "Doctors".
They are all pretentious!

The type of regime you lovingly support does that.But I very much doubt USKOWI censors comments unless you use swear words and launch very personal attacks.
So I'm afraid you're the one who suffers the illusions.

without the contribution of an utter fool such as yourselfclaiming that "Zionists" are running the blog, we'll all be terribly upset at missing your other clownish brayings

If you have doubts about my statement, read the comment of Anonymous (one of the authors)12:46AM who uses "swear words" and slurs..and the authors don't censor him.

I am writing (one of the authors) because that guy uses my word "clownish" from my nonpublished (censored) comment.

In the above article Mr. Uskowi as ussually omits the essence of issues. In this case Mr. Uskowi ignores statement of Gen. Firouzabadi and omits Geneneral's main point that the Patriot misilles are for the protection of the Zionist entity from Iranian misilles (retaliatory strike)..,

you know nothing about Patriot missiles if you think that batteries of them in Turkey could protect Israeli territory.


or do you think that Turkey is a Zionist entity???

Was no need to censor, or any problems with a moderation???

Were some of those commentators inspired by the authors ???

What does it mean "Posted 1 week ago", what was the precise date and time of that posting ???