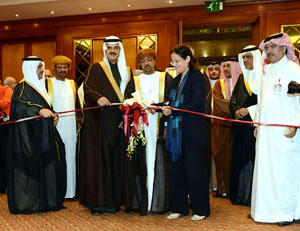 The leaders of Gulf Cooperation Council (GCC), the union of the Arab states of the Persian Gulf, will gather in Bahrain’s capital of Manama on Monday to attend the 33rd GCC Summit. Iran is expected to dominate discussions during the two-day event at Sakhir Palace. On the eve of the conference, Saudi Foreign Minister Prince Saud Al Faisal bin Abdulaziz Al Saud accused Iran of exploiting regional circumstances to suit its agenda.

“We refuse Iranian intervention and have several times told them to stop, but they didn't,” said Prince Saud following a meeting of GCC foreign ministers. “We can't let this issue to go on for long and for that the GCC and the Arab world have to take a united stand against it.

The Syrian conflict will also be a top agenda item at the Summit.

A BUNCH OF STOOGES THAT HAVE NO KIND WORDS TO FELLOW MUSLIM NATION IRAN!!.how sad IT is that the world looks upon these people as representatives of ISLAM.they are plotting against IRAN NOW AND THEY WILL DO THE SAME EVEN IF IRAN IS RULED BY THE OPPOSITION!.their flowing robes smacks of pious and innocent men !,BUT ARE THEY NOT THE SAME PEOPLE SPONSORING A GENOCIDE IN SYRIA?.

Answering the question you have posed: the main prepetuator of genocide in Syria is, using your capital letters: ASSAD!

The brave and astute Syrian Arab Army is doing the same job as the Coalition in Afghanistan, namely combating terrorism. Even the Soviets had it right when they sent in their military in an attempt to prevent the Secular/Atheistic Afghan government from being overthrown by the Mujahedin. Afghanistan was on its way to become a modern and progressive civil society under the communist government during the 70s. They were moving forward in many fields, such as Education among other things, and womens rights were aknowledged.

Everything was wiped away when the government in Afghanistan fell in 1989, and the entire nation went back to the medieval ages and all kinds of development were stiffled as a result, up until 2001.

The Syrian Arab Army should have our utmost respect for fighting against these Radical Islamist elements that have infiltrated into their country.

You would't want the Taliban to regain control over Afghanistan and once more implement their ideal form of society with means of brutality and oppression, right?

There's not an ounce of domestic flavour in this so called "revolution" in Syria. This whole circus is kept on its feet from the outside, with foregin support on many levels. It's a sham to call it a revolution, because it ain't. Sure, it all began with peaceful demonstration, but it was hijacked, and now it's a whole different matter. The peaceful activists never asked anybody to ship in Jihadi death squads to wage a cowardly battle by hiding among civilians in urban areas.

This project was a concoction of Erdogan and the Arab sheiks with the blessing of US/NATO, because they saw that the opportunity was ripe, and that an intervention could be done with maximum confusion to the general public, especially with Western main stream media on its side.

It's a military coup and a proxy war conducted by shameless dictators hell bent on dominating the region with the final aim of destroying Iran. And i honestly pity those who don't see the situation for what it really is. To choose to stay blind and ignorant is absolutely shameless.

Assad came to power through a military coup, ok. But two wrongs don't make things right. The alternative is a secular state under Assad or Sharia laws under fundamentalists (where mass genocide of minorities is perpetrated) and with it, a step closer to the destruction of our beloved Iran. The US/GCC/NATO have a Libya & Syria scenario planned for Iran too.

Years ago I remember these camel jockeys wouldn't dare breath a word towards Iran.Recently they have become very brave and arrogant towards Iranians because of their fat bank accounts and fancy toys.
Iranians can only blame themselves for it.If only we could radically change the political and economic situation in Iran,then watch what would happen to these useless sand dwellers.
Iran a country of 75 million with the worlds third largest oil reserves,the second largest gas reserves,fifteenth mineral reserves etc....Shouldn't be in this present position.But should be the top ten economic powerhouse in the world.