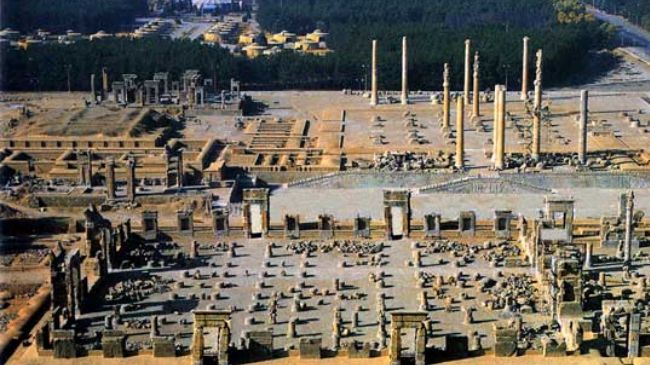 Iranian archeologists have completed the general plan of Persepolis, the capital of the Persian Empire. The latest excavations conducted in June unearthed water canals and hundreds of bas-reliefs belonging to the columns of the majestic Hundred-Columns Palace. (IRNA, 20 December)

Persepolis, registered as a UNESCO World Heritage Site in 1979, was once known as “the richest city under the sun.” Cyrus the Great established Persepolis in 519 BCE as the ceremonial capital of Persia. The construction of the terrace and great palaces were completed during the reign of Darius the Great. The Apadana Palace was constructed during the reign of Xerxes the Great. The Achaemenid kings also maintained three other major administrative centers in their vast empire: Susa, Ecbatana and Babylon.

File photo: Persepolis (IRNA)
Posted by Nader Uskowi at 9:32 AM

Email ThisBlogThis!Share to TwitterShare to FacebookShare to Pinterest
Labels: persepolis

GOD WILLING THE EMPIRE WILL COME BACK!.BUT TO REACH THERE IRAN NEEDS NOT TO LICK SOMEONE'S BOOTS INSTEAD STAND ON ITS OWN FEET!!.

This barbarous regime cannot be trusted with the countries pre-Islamic heritage.
Remember that Khalkhali (the cat killing dwarf hanging judge) wanted to destroy Persepolis,but was stopped by the brave locals.
This occupying Islamic terrorist theocracy even claims that Persepolis and Cyrus the Great was the fabrication of the Jews.
And this coming from an ideology totally based on myths and constantly made up lies.

B.M.A the age of empires is over.As for the nightmare of the return of a Islamic empire,that has come and past and will never return!
Iran will be free from licking the boots of Islam imposed on us from Arabia and return to its rightful place among the few civilized and developed countries.

HOW SAD does it seem You are on the opposite side of history !!.IT IS LIKE EUROPE OR THE WEST saying 'get us off this imposed JEWISH religion imposed upon us by the ROMANS!! '[meaning Christianity]!.JUST WHEN WILL YOU LEARN to go in harmony with the happenings of TIME!.NO WAR OR FORCE CAN uproot ISLAM from the face of IRAN AND FORCE people to go back to the old 'good' practices of yesteryear.NEVER AGAIN WILL a usa OR ANY ARAB NATION HOLD IRAN AT RANSOM! .THE WEST LED BY THE USA GANGED UP WITH ARABS TO WAGE A MERCILESS 8 YEAR WAR.and why do you mix ARABISM WITH ISLAM? .these people [ARABS]HAVE totally defaced the beautiful religion of Islam.they practice horrendous crimes,commit human rights violations,sponsor terror and form assabiyya groups[racial groupings-like the Arab league]against the noble teachings of ISLAM that forbid all these infidel practices ,BUT they have money and influence.the other day they ganged up with non-Muslim to wage war against a fellow MUSLIM NATION[IRAN].so then Iran learned a bitter lesson!.and GOD WILLING ,IRAN WILL BOUNCE BACK AND TAKE ITS RIGHTFUL POSITION AS AN ISLAMIC POWER ILLUMINATING UNTO THE WORLD TOLERANT ISLAM WITHOUT LOOSING ITS IDENTITY !!.