Snow and pollution in Tehran 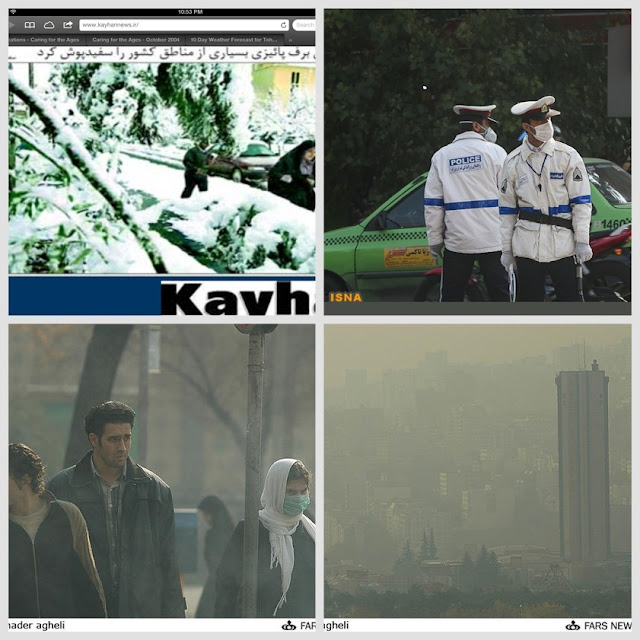 Snow and rain brings a welcomed relief from the smog and pollution that has caused Tehran to declare an air pollution emergency recently. The government had taken measures to reduce pollution by closing government offices to decrease traffic a few weeks back, with little effect.

Modern day Tehran has always had a pollution and smog problem, however in 2012 this pollution may have been exacerbated by the Iranian shortcut to gasoline self-sufficiency, which involved the rapid conversion of petrochemical plants to produce petrol. The Iranian media have also recently reported that there were over 100,000 vehicles in Tehran that didn't meet emission standards (I didn't know there were emission standards in Tehran).

Since these peak days of pollution happening in the fall and winter months this year, one would expect that Tehran's pollution is going to get much worse as the temperatures rise and the rain and snow disappear from the forecast.

In any case, since the regime has no prayer in resolving its political impasse with the west and securing the lifting of sanctions, Tehran and other major cities are likely to suffer from higher levels of pollution  in the months to come. The only thing left to do for the Islamic republic is to put the theo in theocracy to good use and  "pray" for rain and snow this summer.

How about polution in the US ???

HOW ABOUT IRAN'S NEW SCIENTIFIC BREAKTROUGH!

JF-with due respect could you please run something about IRAN'S CLAIM that they have produced an unmanned surface vehicle! WE SHALL BE GRATEFUL EVEN IF YOU DISMISS IT AS A FRAUD!!.

Wouldn't it be wonderful if the snow and rain could clear away all the dirt which is the Islamic regime from the face of the earth?
Then you could truly call that a breath of fresh air!

Don't tell me,you live in the US,right?
Well if you do then go back to Iran and enjoy all the wonderful atmosphere that pervades over there.At least you stop your self from being a nonsensical hypocrite.

Thanks BMA.
I sympathize with your dilemma but I would rather report on things that have practical impact on peoples' lives, not just stuff that look great on paper or video clips. Sorry!

Hypocrites are those who collect money from the agencies that have deprived Iranian nation of its rights and that were helping Saddam Hussein to kill and gas Iranian people...
Those hipocrytes, for those traitors money blame today the Islamic Republic for everything and wish another war for the Iranian population...