Moscow Positioning Itself for Assad’s Defeat 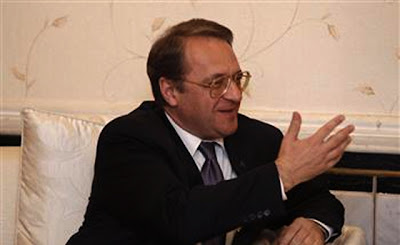 Syrian President Bashar al-Assad is losing control over Syria and an opposition victory cannot be ruled out, said Mikhail Bogdanov, the Kremlin’s special envoy for Middle East. His comments were distributed by the state-run Itar-Tass news agency.

”You need to look the facts in the eyes -- the government regime is losing more and more control over a large part of the country's territory,” Bogdanov said. (Reuters, 13 December)

Bogdanov, one of the country's most experienced diplomats and arabists, also announced that Russia is working on plans to evacuate its citizens from the embattled country if necessary.


UPDATE: Russia’s Ministry of Foreign Affairs today reiterated its Syrian policy, saying there was no change in the country’s official policy toward Syria.  The foreign ministry spokesman said Mr. Bogdanov’s comments were not made during an official meeting or interview. BBC correspondence in Moscow supported the foreign ministry’s account, saying Bogdanov has made the remarks in a non-official setting in Moscow (14 December).

Wonder where the regime stooges are now? LOL!

This Russian so called "Official" is making statements that are out of line with the geo-strategical interests of Russia. Russia has a very important naval base in Tartus where part of their fleet is stationed along with detachements of Marine infantry units (a withdrawal would be a humiliation). Russia will be doing itself a great diservice if it doesn't increase its support of Bashar Al Assad. Russia need to step up more than ever before and do whatever it takes to help him deal with the Jihadi insurgents. Give Assad the proper tools to thwart a defeat, and if that isn't enough, then put boots on the ground. A collapse of a friendly ally can be averted if only Russia is willing to stand up for its own interests, in the way of sending reinforcements to Bashar Al Assad. They could transport troops to Syria, and strengthen their presence, not only in Tartus, but in Damascus as well. Such a move would pretty much hinder the downfall of Assad's secular government. You can't help but feel dissapoinment with Russia, because they show weakness and have become timid over the years. Sometimes you wonder if they have any integrity, self-respect or instinct of self-preservation left in them. On the other side, you see how the western countries make steady strides in gaining influences over various parts of the world. And do not hesitate to commit themselves to exploit any chances of victory. Russia must not allow this trend to simply march on or else they risk not having any bufferstates left, which will result in a complete encirclement of Russia.

The "so-called official" is Russia's chief envoy to Middle East! It's time to wake up to realities. Russia is all but discarding Assad, no need for you to defend him in the name of Russian interests.

Syria isn't a buffer state for Russia, buy a map.

Russia derives nothing from Syria other than a market for weapons.

Please check again as Russia has dismissed this statement and called it a part of western psy-war gainst Syria. Even Zionist mouthpiece BBC has this as front page retraction:

Russia's foreign ministry has insisted that the country has not changed its position on Syria and "never will".

Go on, now. Man up and admit you were wrong.

I knew it was a hoax statement. And i'm very happy to know that this so called official got officially exposed for uttering his disloyal sentiments behind the curtains. He ought to be replaced with someone who refuses to be subject to bribery. How people fall for cowardly western psy-tactics is beyond me.

The so-called official was Russia's deputy foreign minister and the country's chief Middle East envoy. His remarks, which we now know that they don't represent the official Russian position, is nonetheless newsworthy and very important to note. At minimum, it represents an alternative policy now discussed at the highest levels of Russian foreign policy establishment. It could also be a test balloon by the Kremlin before changing course officially.

Nader, a lot of wishful think goes on in your mind..eh. Believe me the legitimate Syrian Assad government is not about to fold. They have not even mobilized their 350,000 reserves yet or deployed the full array of weaponry and political tools. The Salafi terrorists are turning the majority of the population against them by sheer barabaric acts like teaching children how to behead Shia, Christian and Kurd "heretics". The majority of Syrians know what is in store for them if these US/NATO and Wahabbi terrorists ever take over. I don't beleive there is much chance of that as 2 years have passed with wishful thinking.

I would have never wished Assad to fall, if the price was over 40,000 deaths. As matter of fact, one does not wish that on any country. And it should not matter what one’s ideology or politics is. And I sincerely wished it had not come to this in Syria. But unfortunately there is one way out now: Assad to be tried for crimes against humanity. He will not be the first dictator going that road, and unfortunately will not be the last, if experience shows us something. He could have easily come to terms with the opposition two years ago, but it’s too late for that. Let us all hope that he leaves soon without much more bloodshed.

The fall of a dictator does not mean all will be OK in the country. Some of us who have experienced the Shah’s downfall understand it well. But unfortunately countries need to go through difficult transition periods from authoritarian rule to relative freedom, there are no two ways about it. Authoritarian rulers do not allow basic freedoms, including freedom of assembly and formation of opposition parties, with the country not experiencing any democratic institutions and when the top guy falls, the whole society experiences a vacuum, and it may take long time to find its way to a new order. But there is not many alternatives. But I am not at all impressed with the argument that to avoid such situation, one needs to keep supporting authoritarian rulers, Assad included.

There is no way Russian Federation would commit its troop on Ground in Syria after learning a bitter lesson of Soviet Empire were dis-fragmented into 12 independent states. Are they ready to dis member Russian Fed into much smaller states and give way to liberation of Chechenia, Inggustia, Tatars, Siberia and vanquish of Russian Fed. Think again

http://www.youtube.com/watch?v=Qbw8LRIFLng --- Turkey is the main entrance for terrorism into Syria.

http://www.youtube.com/watch?v=Tay8DOZw4yQ --- Over 10,000 terrorist militants fighting Syria and its people.

----" Mr Bogdanov's assessment of the situation in Syria appeared to signal a major shift in the diplomatic stance of Russia...".

Russia most certainly DID NOT dismiss the statement, friend.