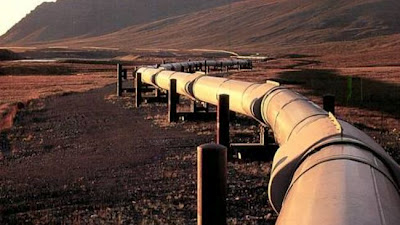 “It’s a feasible project for Pakistan. It’s the quickest route, the cheapest route where we can fulfill our energy needs,” said Asim Hussain, chief natural resources advisor to Mr Zardari. “But we are (concerned) about the sanctions. (Banking) transactions with Iran is a problem.”

The U.S. is pushing an alternative gas route known as Turkmenistan-Afghanistan-Pakistan-India (TAPI) pipeline.

File photo: IRNA
Posted by Nader Uskowi at 11:30 AM

The U.S., with its heavily (16$ Trillion) indebted sinking economy, is trying its damnest to place bumps on the road for the Iranians. They rabidly resort to dirty tactics to turn around people who have a genuine interest in partnering with Iran and doing business with the Iranians. Who are the real chumps? I would say U.S. Senior officials with their snotty attitude who think they can push anybody around. The Americans are doing a fine job on their own of racheting up aversion all around the world. As for Iran, they will get by and find a path forward no matter the resistance.

@3:28 What is bankrupt more than anything else is your anti-american Point of view;that is the Point of view of losers all around the world; your hippie-rhetoric will get you nowhere; belive me: the power of USA will not evaporate like something in a dream; try to be more constructive - that is the way foreward, because nobody care about Moral Interpretation of the world anyway ...

Zardari is a US puppet and Pakistan is an aid dependent charity case. Iran is simply cruising for a bruising if it involved with a bankrupt failed state like Pakstan where the US daily tests its drones to murder civilians. This pipeline is pipe-dream indeed.

...as soon as they get rid of the creepy theocracy, the iranian people will be on their way.