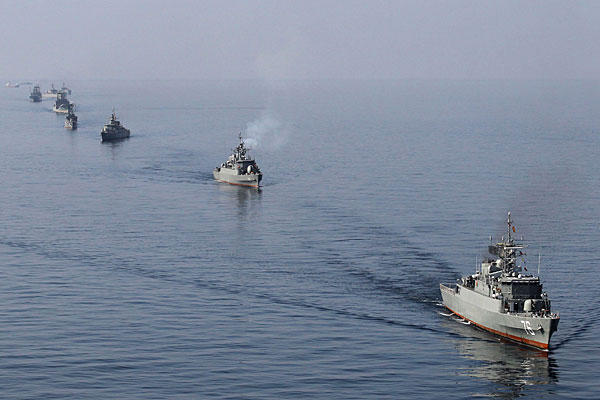 The Iranian Navy announced today that it will conduct maneuvers in an area of about 1 million square kilometers (400,000 square miles), from the Strait of Hormuz, the entrance to the Persian Gulf, to the northern part of Indian Ocean. The maneuvers will begin on Friday.

Iranian Navy commander Rear Admiral Habibollah Sayyari told reporters in Tehran that his forces will fire missiles and deploy vessels and submarines during the six-day war games. (IRNA, 25 December)
File photo: Iranian naval ships taking part in war games in the Sea of Oman near the Strait of Hormuz in January 2012. (Photo: Jamejamonline /Reuters/CSM - Ebrahim Norouzi)
Posted by Nader Uskowi at 10:00 AM

IRAN, a regional superpower and the most powerful nation, militarily, in the whole region of the Middle East as has been written in the book by Robert Baer, The Devil We Know: Dealing with the new iranian superpower. The only country that stand up straightly, directly and bravely against the U.S. global dominations. The rest are the U.S.'s dumb, puppets and slaves. What big shame!

are you silly enough to think that the Iranian navy is even as strong as the Indian ?

What is the most important that Iranian engineers have created naval industry that will bring significant achievements in the near future.

Even western experts acknowledged that Iran invested its military funds in a very rational way. They stated that investment in missile and submarine's research and development was the right way to invest any funds... At present there have been preperation to complete another than the Qadir type of a submarine. What is known that it will be bigger and more modern than the Qadir. Another destroyer the Velayat has been waiting at the Caspian Sea shipyard and its launching is delayed, apparently in order not to make Iran's neighbours too nervous...

In a first stage of any war, the aggressors will attempt to disrupt any electronic communications and cause that iranian missiles will malfunctiuon (due to a jamming or disruptions of their electronic circuits)... And it is the primary problem to be addressed by the navy and other departments..