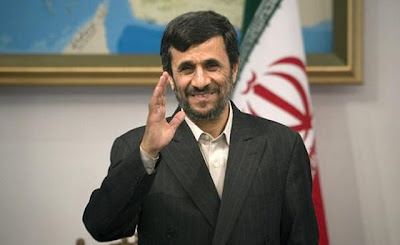 Major General Hassan Firouzabadi, Iran’s top uniformed officer, had warned on Saturday that the deployment of Patriot missiles in Turkey could start a “world war.” Turkey has requested the air defense missile deployment on its soil and the U.S. had announced on Friday that it was sending two batteries of Patriot missiles to Turkey along with American personnel to operate them. The Patriots were very effective in hitting Palestinian missiles fired at major Israel cities during the recent Gaza conflict.
Prime Minister Recep Tayyip Erdogan had invited the Iranian president to the Central Anatolian province of Konya for a ceremony marking the 739th anniversary of the passing of the great Sufi mystic Rumi. Erdogan and Ahmadinejad were also expected to discuss Syria and Turkish purchase of Iranian oil during their meeting.

Is he afaid that the Israelis will capture him too???

@ the first anon: Please quit posting nonsense and try to understand regional dynamics. The simple FACT is that Iran will stand-by Syri, and secondly the Patriots which the Zionists fielded by repainting and rebadging them Iron Dome(Iron Dumb)proved to be a miserable strategic failure, hence the Zionists reluctance to mount a ground invasion by its unimpressive military rabble, who looked like delinquint schoolboys rather than a military.

The most important point to keep in mind is that even the US is withdrawing its naval assets from the Syrian coast since Russia has already warned the imbecile puppet Erdogan and also increased its military support to Syrian military, which is on the offensive now. Ahmadinejad's visit to Ankara was meaningless since Turkey is a mere stooge of the US, so why not deal directly with its masters on regional issues. The situation in Syria is akin to the Spanish civil war and will be a long drawn out affair and Assad will survive. Iranian FM Salehi, who was hand picked by Khamenei after Mottaki was booted out, has openly stated that Iran will never allow a US/Zionist/Salafi takeover of Syria. The US is now mired in severe problems at home and abroad and has no stomach or capacity for overt military involvement, while its Salafi terrorists are taking a beating and can't even control a single neighbourhood, let alone a city.

BTW, if the patriot missiles were "miserable failure" during the Gaza conflict, why then the chief of staff of the Iranian military believes their deployment could cause "world war?" There is a disconnect here, if they are no good, why should Iran be concerned about their deployment?

Ahmadinejad cancels his trip too Turkey only four days after the presidents of Afghanistan and Pakistan were in Turkey for a trilateral summit. There are very difficult and sad days for Iranian diplomacy; the all-out support of Assad will prove very costly for Iran, especially when the Russians get ready to throw Assad under the bus.

I agree with you that the situation in Syria could be akin to Spanish civil war, but for different reason! Assad is becoming a caricature of Franco and will lose the civil war to the rebels who enjoy international support.

I am not impressed by your repeated reference to Salamis. Their presence among the opposition does not absolve Assad of his crimes against humanity.

Hezbollah, Russia, China, India and a host of other nations with credible intelligence believe that Assad will outlast these Turkey, Saudi, NATO and US supported Salafi not "salamis" (Salafism is an offshoot of puritan fanatical sect of Saudi-Islam), These Salafis were used by the Brits and later Americans as mercenaries for Afghan wars and other sectarian Islamic fratricides. They are brainwashed and indoctrinated in CIA sponsored madrassas. BTW, the Khaleeji Wahabbis simply don't have the manpower to fight Syrian and Shia crescent, with Iran alone with 78 million people, 20 million Alevi-Shia in Turkey, 22 million in Iraq, 2.5 million in Lebanon, 15 million in Yemen and so on. Turkey will tear itself apart if it ever went to war against Syria, not to mention the Kurds will take advantage of Turkish weakness and speed-up their freedom war combined with their Syrian ad Iraqi kin. This is a very complicated situation and if not handled in an adult manner will engulf the whole region. No pun intended.

Mr. Uskowi, by "Salamis", I presume you mean the Saudi created Salafi freaks. I wish they were Salamis (Salam means PEACE in Arabic).LOL.

Russian will not throw Assad like some on this blog wish...

It is not costly for Iran to support Syria because the time Assad is buying for the Islamic Republic is very precious...

The worst case scenario, or may be a blessing, will be if State of Allawites; from 1920's, will be reconstituted and include Latakia and Tartus with a possibility of Russian peacekeepers...

Mr Uskowi, 71 percent of the Syrian people support Assad,and the odds are in his favor that he will survive the onslaught of the Alqaida/USA/Zionist Axis.
Turkey will be Destroyed,for her reckless and sinister behaviour, towards Syria.Iran,Hezbollah,and Russia will come to the rescue of Syria. And you Mr. Uskowi will have lots of Crow to eat!

LOL!! Just like 99.99 percent of the Iranian people support the Islamist theocracy in Iran??
You must be on some heavy substances to believe the propaganda nonsense!
Not more than 15 percent support Assad's military dictatorship.
Sorry to pop your self delusional bubble!

you also heard those rumors about him being targeted?

the ones about the Israelis working on a bigger and better mousetrap?

friend 1:08===== Salamis was a joke, and it's almost surprising that you failing to understand that, considering that the rest of your comment was rife with hilarity.

should by some absurd turn of events the essential powerless folk of the Shia crescent rise in war against Turkey..... the Turks will be joined by the forces of NATO....and that'll mean that the Shia will be again minting martyrs in multitudes...in a matter of weeks it'll all be over and the Shia will be completely skewered for a few more centuries.

Show proof to back up your claim or else it's simply a lie. We don't care about empty rumors and hearsay. Factual relity is what matters. Who knows what the consensus is anyways. Besides polls are difficult to verify in terms of accuracy.

@ Anon Dec,17 7:51P.M.
All you want is a bloody war Sir! You care nothing about the Syrian People. All Arabs are Rag Heads to you, people like you, would be just fine with a World War3 situation,all Monsters like you want is regime change in Iran and that is something that is not going to happen. You racist self hating Persian.

well A-F turns out that you're quite wrong...yet again.

" Russian President Vladimir Putin has now waded into the debate on Syria’s future, after over 40,000 people have lost their lives in the country’s bloody uprising.

Putin stated that his country was “not concerned about the fate” of President Bashar Assad’s regime, while managing to cavalierly sum up the experience of decades of Baath Party rule, usually as a strong ally of Moscow, as a “family [that] has held power.”