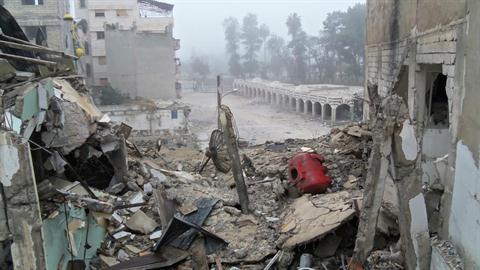 Syria's National Coalition, the country’s main opposition group, today denounced an Iranian peace proposal as a last-ditch bid save the regime of President Bashar al-Assad.
“As the free forces of the Syrian people accomplish one decisive political and military victory after another, the regime and its allies keep on launching lackluster and overdue political initiatives,” said the National Coalition in a statement released on Friday. “The Iranian initiative represents one example of these desperate attempts to throw a lifeline to the inevitably sinking ship of the Assad regime.” (AFP/ The Daily Star of Lebanon, 21 December)
Iran, the most loyal ally of the embattled Assad regime, offered a six-point peace initiative on Sunday.
The plan did not envisage the fall of Assad’s regime, but instead called for “an immediate halt to violence and armed actions under the supervision of the United Nations.”
It also called for sanctions against Syria to be lifted, the start of national dialogue, the establishment of a transitional government, and free elections.
The National Coalition said the proposal claims to care about the lives, unity, and independence of the Syrian people, but if the intent was sincere, “the Iranian regime would end its support  to the Assad regime politically, militarily, and economically, and pressure the regime to leave as soon as possible."
“The Iranian regime must seriously consider the future of relations between the Syrian and Iranian people, as the regime it supports is falling,” the Syrian National Coalition warned.
reform protest movement inspired by the Arab Spring but transformed into an armed uprising after the Assad government began brutally crushing demonstrations.
Photo credit: Damaged buildings in Homs. 18 December 2012 (Shaam News Network/Reuters/Daily Star, Thair al-Khalidieh)
Posted by Nader Uskowi at 7:36 AM

THESE RATS WONT SUCCEED! SYRIA IS BETTER OF UNDER Assad than any stooge the west is going to impose upon SYRIANS IN A BID TO WEAKEN THE RESISTANCE.

The Syrian National Council puppet organization whose top official once had an uncle who served the interests of the French back in the day, wish for the nation of Syria to be put back under the heel of the Europeans just as it was during the colonial age. The flag of the "Free Syrian Terrorists" is the one they had when their country was a French colony. And i bet you that the Frenchmen are rubbing their hands for the opportunity to rebuild the infrastructure of Syria. The little puppets will rather beg them to send over their companies to reconstruct everything that was destroyed by their own stupid actions. The IMF and all the Zionist run banks will be more than happy to lend money to 'A New Syrian Government' for the purpose of reconstruction and the purchasing of military equipment, and that will turn the poor Syrian population into indebted slaves. And as for the Jihadis, they are merely used as cannonfodder, extra manpower to put it nicely, if you will. They won't be included in a future Syrian puppet government. Instead what we will see in the future is a continuation of armed rivalries and sporadic conflict in that country even after Assad is gone, because the Islamist groups will realize that they were just a cheap brick in the grand scheme of things, and will be pissed off when they understand just how badly they were cheated by empty promises. Of course, none of that is of any concern to the Western Imperalists. Except, the West are the ones who will be bringing in the profits instead of Russia or China, and that is essentially the endgoal of this Syria venture/project. So as long as the main goal of the Western countries can be realized, then it's all good in their mind.

The UN who has backed and confirmed the recent statements from both Russia & Iran by making their own Official independent statement, are absolutely correct in saying that Syria's fate should be decided by her own people, and not by political actors living abroad. This puppet coalition is no more than a pawn in the hands of US & EU, consisting of less than a dozen or so odd stooges with tight connections to banks and big corporations, and they have boldly and audaciously taken upon themselves to dictate the future of 23 million Syrians, without even have been asked to get involved by any domestic consensus inside of Syria whatsoever. To begin with, all sides need to agree on a cease-fire, then have a referendum inside Syria, and free and fair elections under the monitoring of the UN. That is the only genuine and honest way forward. Then and only then will we see the righteous entity lead the Syrian people. It's not about saving Bashar Al Assad with whatever it takes, as per the blog poster's wishes, but to give fairness and justice a chance to prevail through legal means. Iranian and Russian officials alike have expressed a view that suggests that Assad need to step down if the votes in an election are not in his favor. Free and fair elections is the only true way, and one which will give the ultimate answer to the question of who the Syrian people want in power.

Good that they have rejected the Islamist terrorist proposal.The proposal was a last ditch effort by the anti Iranian occupying terrorist theocracy to maintain Assad's position in Syria.
You stooges that think that Assad's regime is going to survive,are badly and utterly naive at the least.
Time for regime change is well over due for Syria as well as in occupied Iran.
If necessary freedom has to come with bullets.

http://www.youtube.com/watch?v=mhXR3saHkso --- Syria News 18.12.2012, Syria will remain strong and impregnable thanks to its people.

BMA, can you make a complete sentence without cursing so much?

(2) if the opposition commits itself to a free and fair election, can you support them?

WE are nobody's stooges by supporting a peaceful transition in Syria.
WE are nobody's stooges in saying the WEST is committing a crime in supplying arms in SYRIA!,HOW WRONG YOU ARE TO IMAGINE THAT 'FREEDOM HAS TO COME WITH BULLETS'-this is what A Gaddafi said some time in 1979 while planning a bloody coup IN LIBYA only to meet the same fate LATER!.THE WEST HAVE A MILLION OPTIONS TO FORCE Assad out of power peacefully and pave way for a democratic change-.BUT AGAIN THESE PEOPLE ARE SPONSORING A VIOLENT CHANGE so that when the RATS take charge ,they will be accosted with a heavy bill from the WEST'S military industries.-NOT A BAD IDEA TO A PEOPLE FACING AN ECONOMIC ROLLERCOOSTER!.

MR NADER!-
just who have been advocating for free and fair elections in Syria?.when you say the Assads have been in power for nearly half a century,WE MAY RISE A QUESTION -without the support of the west?.i mean are you serious the ASSADS HAVE BEEN THERE AROUND WITHOUT THE BLESSINGS OF THE WEST?.this Western hypocrisy is what we are cursing and exposing.THEY ARE AT EASE WITH BAHRAIN AND THE world's most violator of foreign workers' rights [SAUDI ARABIA].
-AND your suggestion that the opposition may commit itself to a free and fair elections! -IS 'GOOD INTENTIONS 'on your part.These fighters are up to something beyond democracy.BECAUSE IRAN AND THE SYRIAN GOVERNMENT HAVE ALL DEMANDED A HALT TO VIOLENCE TO PAVE WAY FOR ELECTIONS TO NO AVAIL!.

-you have very good intentions and an honest line of thinking as per realization of democracy in the middle east!.the bad news is that THE bloody thirsty West DO NOT SHARE YOUR VIEWS!.

http://www.youtube.com/watch?v=TP3mXVRd89Y&NR=1&feature=endscreen --- Why the NWO hates Syria.

http://www.youtube.com/watch?v=2iAnhGCaG6s --- Battle for Syria: view from the frontline!

http://www.youtube.com/watch?v=XbmczLdvZVY --- 95% of 'Syrian rebels' not Syrians.