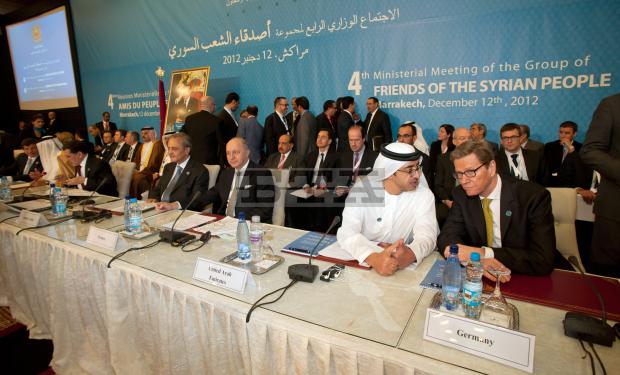 More than 100 countries on Wednesday recognized the Syrian National Coalition (SNC), the newly formed opposition umbrella group fighting to overthrow the Assad regime. The recognition by so many countries will open the way for greater humanitarian as well as military assistance to the opposition forces.

The decision to recognize SNC was taken during a meeting of “Friends of the Syrian People” in Marrakech, Morocco. French Foreign Minister Laurent Fabius said the meeting demonstrated “extraordinary progress” for the Syrian opposition in their struggle against Assad. He added that the European Union will now review its policy of arms embargo to Syria every three months, leaving the door open for arming the rebels soon.

“We want to have the ability to continue or to change our attitude on this point — the fact that the coalition, which is asking for the right to defend itself — is now being recognized by a hundred countries, yesterday the U.S. and first France, I think this is a very important point,” Fabius said (AP, 12 December)
The Marrakesh conference came hours after President Barack Obama declared that SNC was the legitimate representative of its country's people.
At the conference, Syrian opposition spokesman Walid al-Bunni called for “real support” and not just recognition. The Syrian National Coalition, formed in November during a conference in Doha, Qatar, has been calling for increased international support, including military material.

“We need not only bread to help our people… We need support for our Syrian army — we need to speed up things and get rid of this regime,” said opposition spokesman Saleem Abdul Aziz al-Meslet. (AP, 12 December)
Photo credit: ‘Friends of Syrian People’ Conference in Marrakech, Morocco. 12 December 2012. Pictured: German Foreign Minister Guido Westerwelle (R) and his UAE counterpart Sheikh Abdullah Bin Zayed Al-Nahyan (2-R). French Foreign Minister Laurent Fabius is seated in the middle. Representatives of more than 100 countries attended the conference. (EPA/TIM BRAKEMEIER)
Posted by Nader Uskowi at 10:03 AM

These countries are puppets of US/Zionists or aid dependent charity cases. The only ones that count in this equation including China, Russia, India and Iran are still backing the legitimate Syrian government against US inspired terrorism via Wahabbi-Salafi thugs bank-rolled by Saudi-Persian Gulf Arab petro-pimpdom money. ZERO PLUS ZERO STILL EQUALS ZERO.

more than 100 countries are " puppets of US/Zionists '

you really can't be THAT stupid.

There are actually 130 countries that have recognized the SNC as of now!

India and China make-up half the world's population and these 130 "countries" are a collection of petty toadies (tiny Nauru and Mironesian islands, newly enslaved bankrupt Eastern European statelets), puppets (like Canada, Australia and the Anglo hyeana coalition of global plunderers) and assorted economic basketcases. The usual collection of neo-imperialists masquerading as NATO and their Arab and other colonial punks. Get a grip on facts guys. LOL. It changes NOTHING on the ground. Over 138 nations supported Palestine too and the Zionists keep up the Occuption and expansion. So these acts are meaningless.

Wow, all this anger because four decades of Assad family dictatorships is coming to an end?

Anger not. TRUTH perhaps.LOL. which stings even worse!

And now Russia! The Russian chief envoy to Middle East said today Assad is losing control. Moscow is positioning itself for Assad's defeat.

Pretty soon you need to add Russia to your list of “neo-imperialists.” Should they masquerade as “former social imperialists”?

How MANY countries recognized Bin Laden's fighters as a freedom fighthers, when they were trained by the West to fight against Soviet Union in Afganistan???

There is no legitimate rule of Assad and his Alawite clans over the Arab majority population. Assad and his cohort's are not Arabs and certainly Muslim because the Alawites creed are Pagan Cult Worshipper compose of 11% of Syrian Population. There is no way these Pagan believers can win the Votes by ballot box, even through its brutality and immoral support of its alien Masters Russian and China