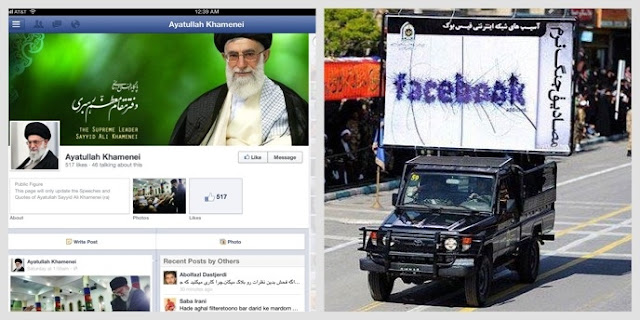 As depicted in the image above (from a government parade), and as evident by the numerous "Facebook" arrests, the Islamic Republic has branded Facebook as a threat to the social and political stability of Iran.

Facebook can not be accessed in Iran without a software to bypass the state filter. It is ironic that Khamenei is doing what many Iranians are going to prison for; perhaps now he would consider releasing the "Facebook" political prisoners.

It remains to be seen if the site will allow critical comments. I intend to test it by posting a a comment today. Wish me luck! 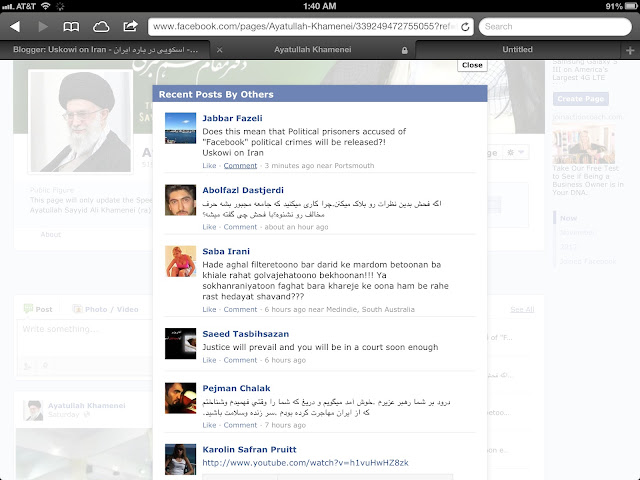 Photo source: Facebook, unknown
Posted by Unknown at 1:07 AM

I would post something sarcastic on there, except I have family in Tehran as friends on my own Facebook page. Can't risk it. :(

The filters leading to his sit on Facebook will only allow praising of AGHA and the regime.LOL!

It is baffling beyond belief. Who advised him on this perilous venture? What briefing he's had? At whom is it targeted?

@reader 2:46
I agree with you completely.
I think he is misinformed about the nature and openness of Facebook.
My guess is that by the time they get a clue they would start censoring comments or shut down the site.

As implied earlier,filters will only allow praising for his lordship and the corrupt theocracy.

http://www.youtube.com/watch?v=aGz9gFHIgNM --- Tehran, student debate: Any student who express their opinion will be arrested.