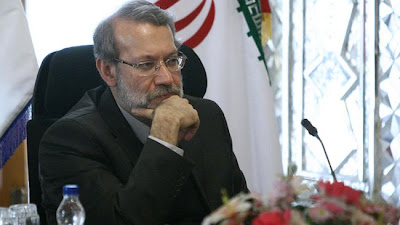 “In the international arena, the United States has experienced ups and downs so that it took utmost power at the fall of the Soviet Union, but the enlightenment of the Iranian nation faced this arrogant power with defeat in Iraq, Afghanistan, Lebanon and Palestine and now it is suffering a decline of power,” Larijani told the parliament on Wednesday. (IRNA, 5 December)

This blogger wishes he were in the parliament during the speech to see if Larijani was making these comments with a straight face. Is there no limit to delusion? Larijani is saying: Iran singlehandedly causing the defeat of the United States in the world stage, and by implication Iran now being one of the most, if not the most powerful country in the world. I am truly worried.

Larijani has a straight face?

not just his usual one?

Well, Larijani is right in a way, but the notion that Iran has defeated the US in the world stage is of course bogus. The financial crisis in the US hasn't been caused by Iran, nor by another nation in the world. It was weakened by an poisoned economical system, because of a lack of regulation. But,

Iran has indeed outmaneuvered the US in Lebanon and Iraq, which is perfectly described and recorded in one of Rober Baer's books.

CONGRATULATION MR USKOWI AND YOUR TEAM FOR THIS WONDERFUL page CHANGE!.it is professionally designed and deserves a praise from us all-LET US HOPE THERE SHALL BE SOME CHANGE TOO FROM USKOWI HIMSELF,-instead of highlighting only factual negative reporting in IRAN,you will TELL THE WORLD SOMETHING ABOUT IRAN'S AUTOMOBILE INDUSTRY,NANO TECHNOLOGY,I MEAN IRAN'S SUCCESS STORY IN SCIENCE AND TECHNOLOGY,without prejudice and half heartiness!!.

From my own personal point of view, I would prefer the previous page rather than the new one due to its simple looking and nice arrangements. I think.

Looks like that Larijani fellow has forgotten the Islamic theocracies failed policies in their ally Syria.

of course Larijani is a thoughtful intellectual,a Presidential material.HE ALWAYS CALCULATES HIS WORDS !!.

Iran and IAEA meeting set for 13th of December.

yes, one of his faces is fashioned out of some material that is deemed presidential in the pestilential manner of the fevered theocratic minds running Iran into the muck.

Than you so much, glad you like the new layout.

What old features did you like the most? We probably could incorporate some of them here.

Apparently the new (uskowi web) page has been changed in order to remove recent comments' section from the first previous page of the old form.

It has also been done, in adduition to increaswed censorship (including fake - self helping show of "impartial moderation"), to prevent bloggers to see the newest comments; which could also be related to the past issues.

Since Mr Uskowi stated that he doesn't need my blessings I have responded to him that I do not consider any blessings to those who have Zionists or Iran's adversaries' blessings or either work as the agents of foreign entities.

Since he has subscribed to zionist's media my blessings for him were out of any consideration...

A-F
If you weren't doing a job that includes trying to get under our skin I would have offered an intelligent response. Enjoy the Tehran fresh air, and keep the insults civil and short.

and I would like to see the back of you..... growing ever smaller.

You certainly will see your vanishing chances if you prefer see backs of other people ..

BMA- Looks like YOU ARE SERVING the goals of the blog owners.
They really need people like YOU!!!!!