Substantial Number of Aircraft Being Sold to Persian Gulf Countries 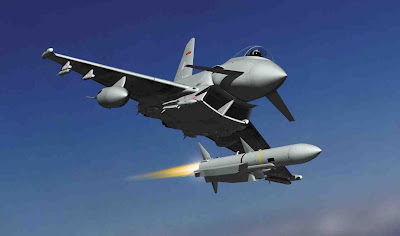 Britain’s BAE Systems today signed a contract worth around $4.1 billion to supply 20 fighter jets to Oman. The contract provided for the delivery of 12 Typhoon and eight Hawk aircraft to Oman starting in 2017. (AFP, 21 December)

BAE is also expected soon to finalize the pricing issues with Saudi Arabia to deliver 72 Typhoons to the Kingdom. Saudis have also signaled their readiness to place another substantial order for Typhoons on top of the 72 jet order.
BAE officials have also said the United Arab Emirates has shown interest in placing an order for up to 60 Typhoons.
Photo credit: British-made Typhoon fighter (winncad.blogspot.com)

How sad that even Oman is surpassing Iran in modern aviation.

These Persian Gulf petro-pimpdoms and Saudis are still defacto colonized puppets of UK and US and are forced to buy inflated priced Euro junk. They neither have the infrastructure or the skills to maintain or operate these stripped-down weapons. The Brits created Oman and then had Qaboos lock up his senile father and take over with Shah's help. Over a three hundred Iranian soldiers and airmen gave their lives to save Oman from Dhofari freedom fighters in 1971-1977conflict as the shah was forced by the US to assist Qaboos along with British SAS units. 2 Phantoms, 4 Hueys and one C-130 was lost to SAMS during the Dhofar war. These Arab puppets would always have to look for others for survival.

The Saudis, for instance do not have local crews at Tabuk or Riyadh to operate even the 30 year old F-15's. Many US efforts have made to teach the semi-literate Saudi pilots, but have failed. One crashed a F-15 in the Persian Gulf last week. The US has taken over 1500 Saudi bedouins to Colorado for training, but most of them went to the brothels and casinos instead. In any case, Omani energy resources are coming to an end by 2030 and they have not created a rudimentary diversified economy. Pakis and Balochis even provide basic military manpower and labour.

Even Saudis face double digit unemployment and depletion of resources. The Al-Saud petro-pimps are ageing anddying-off rapidly and the Hejaz peninsula will face massive internal upheavel so these junk aircraft will not be suitable to internal repression, hence they wanted German APC to quell civil unrest like in Bahrain. These colonized pimpdoms are on shifting sands.

Let's hope the leadership in Iran does not fool itself with empty sloganeering used here. It would be the height of irresponsibility not to take the military developments in the Persian Gulf seriously. But I guess it's different if you are an anonymous person.

In the age of missiles and cluster ammo, aircraft in tiny Sheikdoms are useless as tits on a bull, as a single missile with runway denial ammo can render the airforce useless. Iran does indeed take its defence seriously and is aware of all issues. These one-dimensional obscure blogs based in the US, that are not read in Iran would hardly matter, one way or another..eh.LOL.

FYI, the aircraft in the image above is NOT the Typhoon..It's the Typhoon main export rival the Dassault Rafale.

Then why do you keep reading these "one-dimensional obscure" blogs? You have nothing else to do in life, or is it part of what yo do? BTW, why are these obscure blogs are not read in Iran, nobody are interested in their contents or because of government censorship? And why the government should censor an obscure blog? For lack of nothing else to do, or is censorship in their blood,, a way of life for them? Now that you've brought up the subject of these blogs and their lack of readership in Iran, appreciate it if you could shed some light on these questions.

Thanks for the note and apologies for the mistake. It is corrected.

1.The Shah was not forced by the US.It was Iranian policy then to protect the Persian gulf.Because Iranian forces were the only major power there after British withdrawal.The US did not operate in the Persian gulf at the time until latter on during the Iran Iraq war as well as Islamic republics confrontation with the West as regards the Straights of Hormuz and the never ending nuclear enrichment fiasco.

2.I'm no lover of petrol gulf Arabs neither but you mustn't believe in all the propaganda as regards their lack of technical knowledge.Those new fighter planes can be simply manned by foreign pilots until they train up there own people.

3.Our fighter planes are well over 40 years old and despite the upgrades they haven't a chance against a newer 21st century killing machine,even if it is manned by camel jockeys.

4.Despite all the technical achievements of the missile program,they still remain a offensive weapon and are very limited in a political and military use,unless it is nuclear armed.This is why Israel uses its air power to good effect,because it is more accurate and precise in close selective targets with far less political fallout.

5.Unless Iran modernizes its air arm with something as modern as the planes bought by the Persian gulf Arab states,it's going to face a very tough challenge from them in the years to come.
And I can't personally see the Russians or the Chinese to supply Iran with any modern fighter planes in the near future due to the UN sanctioned arms exports to Iran.

6.Iran is pussy footing in its aviation industry and has not invested well enough to design and build modern fighter planes.And that despite all the propaganda they have been feeding us with the F5 clones and the other canceled programs.

Parasitic Mullahs have left Iran with no friend in the world and thus vulnerable; now they can find out whether Hamas will come to their rescue after those Typhoons attacked the country ...

Hello.....It is me again....V. Putin, even my friends in the west have much to gain from the people of Iran's inabilities........we must maintain what we have.....it is good for all (many people in the world benefit financialy!) except the people of Iran of course!

Besides I still like the name "Persian Gulf"......although I do realize that someday soon the vast majority of the world will call it the Arabian Gulf, for now, let us be thankful and prosper......my mullah friends look like they can maintain the current mind control over Iran's people for many years to come!

We cannot let the "Persians" rise again!!! That would be bad for business.......oh and before I forget.....I would like to thank my mullah friends for putting India back on my plate.....more oil, nuclear plants and even weapons too...thanks so much Mr K !!!! Hope you are getting my residule checks cashed without problem, also remember.....we will leave a light on here in mother Russia for you.....should you and your boys ever need to find a room at the rest spa!!!

Vladdy baby, if you've so many guest dachas available, then how come you have your underlings asking other countries to provide asylum for Assad?

agree with most of your post regarding Iran aging air force and the rudimentary steps they are taking in their homegrown industry, the essential of the budget having traditionally been allocated to its missile program instead since the very inception of the 1992 indigenous armament program. But one must take into account that after 8 years of a devastating war and its effects on the economy and industry, plus the newly formed arms and technological embargo against the country past this period, choices had to be made. Iran would have needed tremendously more infrastructure , resources and trained personnel in order to come up with a 100% independent air force & industry, that was, and is still not today, a realistic goal to achieve with a 10+ billion budget "only", hence the emphasis on air defense and offensive missile arsenal in every level of warfare (would it be oriented in an anti-ship, anti-runways/airfields, or anti-armor/personnel in the field warfare role). If it wasn't for this gigantic and diverse arsenal (the biggest of the Middle East by all accounts), as relatively inaccurate as it may still be compared to its decades-old brothers in the western and sino-russian world, an IDF unilateral assault would have been effectuated for years now, instead all what we've seen is empty posturing and an alleged last-minutes cancellation of an operation back in 2010. Israel is not renowned for its reason and patience whenever it comes to spontaneous strikes against its neighbor, we've seen it both in Syria, Lebanon and Iraq since '82, and it is definitely not some diplomatic restraining that prevents them from doing so with Iran today. When their political-military board determines that its army can do something, the planning go ahead and is executed perfectly.

Iran's obedience for an all-ballistic option in any war scenario certainly has its limits by considering projected progress that regional ABMS can make overtime and an inventory than will inexorably dwindle fast in the event of a real conflict and limited production capacity, but the same goes with a total air war waged by an enemy 1500km+ distant that will have to face the entire Iranian air force, that yet again must not be underestimated and is in constant evolution, even if it obviously seems timid in comparison to the newest GCC purchases of top notch equipment, please don't come up with the usual "IRIAF is a rusty, antiquated enemy that will be wiped out in a couple seconds out of the sky" because it is just utterly wrong and not productive in a discussion. EVERYONE in the defense establishment knows about persistent rumors of a full radar and missile upgrade having been going on for quite some time between Iran and China, the most recent one being the integration of the PL-12 air-to-air missile for all IRIAF F-14s and F-4s, both of the latter having a growing number of units being put back into active service and their airframes strengthened, and their engines replaced gradually since the early 2000s.

Add to that the bulk of its air defense assets around key nuclear sites, with less than a quarter of their fuel load to maneuver and counter-attack. Keep into mind that the attacking force will suffer from support and sustainable action, which is inherent to the very nature of being the attacker operating far from home in enemy operated region...

If you have no faith in Iran indigenous abilities to advance their defense-related project, at least have some in it principal patrons helping it in a ever-increasing fashion that are Russia and China, and whose weapons sales prospect to Iran (and others) provoke an histeric frenzy of diplomatic moves in the West and specially Washington every time they appear.

@anon 7:03
Please repost ur comment, minus the insults, and it will be published.

I did give you an honest appraisal of the situation and my position but as usual the TRUTH was too hard to swallow and my comments were CENSORED by you or one of your flunkies as usual practice on this one-dimensional blog. Try to grow-up and learn to respect diverse opinion. Even Iranian media has more freedom of expression.LOL.

@anon 5:05
Wouldn't it be easier if instead of whining and role playing you would just make a point?!
Ps. iranian media and freedom of expression can hardly be used in the same sentence.

I have no problem engaging in serious discussions with our readers and commentators, but with all due respect I can't understand what is it that you want to discuss.