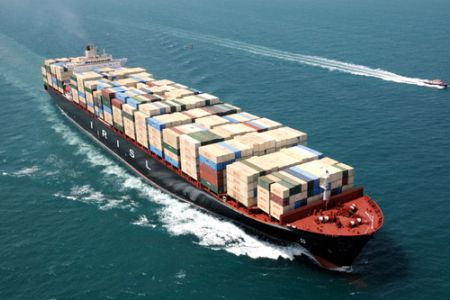 An Iranian-flagged cargo ship MV Amina has broken arrest and fled from waters around Sri Lanka after weeks of detention by the country’s navy acting on a court order obtained by Germany's DVB Bank SE, Reuters reported today.

The vessel is managed by Tehran-based Rahbaran Omid Darya, a private company working for the Islamic Republic of Iran Shipping Lines (IRISL). The company is under U.N. sanctions.
The MV Amina was seized in December after DVB Bank obtained an order on 12 December from the Colombo High Court to hold the vessel after the owners defaulted on a payment. Court documents showed that DVB Bank sought to recover millions of dollars.
File photo: An IRISL cargo ship (IRISL)
Posted by Nader Uskowi at 8:55 AM

When you have a criminal regime you're treated like a criminal.
Shameful.

Anyone betting on if it makes it back to Iranian territorial waters before being intercepted by the U.S Navy or not? It'll have to run through sort of a gauntlet in the Northern Arabian Sea, and I doubt there is much the Iranian Navy can or would do for them at this time.

Reminds me of the John Wayne movie "The Sea Chase".

My thoughts exactly! And they have the entire U.S Fifth Fleet standing in their. Hollywood can't make better drama than this!

What? So the US navy will intercept an Iranian ship that has a problem with the Germans? What the hell does this have to do with the US???? I really hope the US navy is stupid enough to poke their nose into something that's completely none of their business..

If ze Germans are tough, they should go catch the ship themselves..

The U.S Navy vessel intercepting the Iranian cargo carrier ship, will do so under legality relating to intentional sanctions imposed upon Iran, because the current Iranian government cares more about the Palestinians, than it does about it's own people....That is a fact.

The guilty fleeth even when no man pursueth...


the US Navy isn't going to chase a cargo ship simply to collect a debt.

if the ship is chased, it'll be because there's some serious concern about something on board.

Wrong. In this case they will. The ship is "Iranian." You wait and see.

And I have thougt; like MD said, that you are General Yossarian (from a Free Iranian Army??)

Also, There's a bank that wants its money involved.

Even if it's a German bank this time,
American bankers might be very interested in having
a precedent case where the military can chase down their debtors.
The vessels Iranian flag should make for a perfect excuse :(

That's right Yossarian,the rial is utterly worthless.
It used to be 75 rial for $1.00 and now it is beyond 40000 rials for $1.00 and rising.
No thanks to the fascist Islamic theocracies incompetence greed and self imposed stupidity.
I hope you feel proud of yourself by supporting these idiots.

I agree they care less for the Iranian people and more for the Palestinians.

Yo-Yo --- if you get off paying "twice the price" for a cappuccino, then you can certainly afford to one time pay the posted price and wager what you've not overspent.