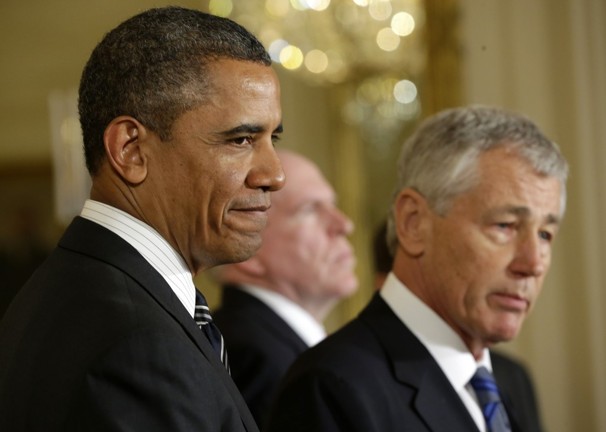 President Obama’s selection of his new national security team has generated strong interest in Iran and Israel. The Iranian foreign ministry spokesman said Tehran was hopeful that the nomination of Chuck Hagel to lead the Pentagon represents “practical changes” in U.S. policy toward Iran. Meanwhile, the visiting Israeli finance minister said in Washington that Israel hoped the administration issue an ultimatum threatening military action if Iran refuses to abandon its nuclear program.

Asked about Hagel's nomination, ministry spokesman Ramin Mehmanparast said today that Tehran was hopeful that there would be “practical changes” to U.S. foreign policy, and that Iran would change its attitude towards the U.S. if it respected its rights. (IRNA, 8 January)

Meanwhile, Israel pressed Obama for military threat against Iran if the nuclear talks fail. Israeli Finance Minister Yuval Steinitz was the latest member of Israel’s cabinet and national security establishment to come to Washington to press senior U.S. officials to lay out a tougher line on Iran’s nuclear activities.

The time has come for President Barack Obama to give Iran a “very clear ultimatum, very clear deadline combined with a very credible also military threat” Steinitz told a group of reporters in Washington this morning. (Bloomberg, 8 January)

Steinitz declined to comment on Obama’s announcement today that he will nominate Hagel as defense secretary, saying “it is not our custom to interfere in democratic procedures in other democracies.” Adding, “We will accept and respect any results, any decision made by the president and the Congress here.” (Bloomberg)

Obama wants the Islamic regime to be imposed on us,but with a slight change.For example; Mousavi,Rafsanjani.Just look at VOA and BBC,they support the so called green movement of Mousavi.
They will all fail to impose this barbarous anti human regime on us.

a friend of iran becomes us defense minister
not so bad

Don't you mean the friend of the Islamic regime?

he is not a friend for "Jewish Lobby" in the Us.

it would be a bid mistake if you guys think like this
iran dont care about none of them...they do what they like

Didn't Ghaddafi make up with the West and stop his supposed nuclear program?
And look what happened to him in the end.
Islamic regime was founded on Anti Western and especially supposed anti US agenda.
If they drop that anti Western agenda they would be committing suicide.
If the Islamic theocracy starts normal relations with the US (doubtful)it will embolden the Iranian public to rise up against the regime for human rights and justice.
Damned if they do and damned if they don't.
That's why Iran is stuck in this present situation.

no body can give ultimatum to iranian nation.they only can resort to inhumane acts, such as terror and assassinations cyber attack.illegal and barbaric sanctions.iran is strong to be pushed around by bunch of internationals tugs.