Iran Warns Against Attack On Syria 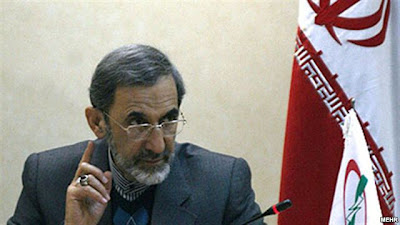 A senior Iranian official said Iran would consider any attack on Syria an attack on itself. Ali Akbar Velayati, senior adviser to Supreme Leader Ayatollah Ali Khamenei, made the remarks during an interview with Iran’s semi-official news agency Mehr.

“Syria plays a key role in the region for promoting firm policies of resistance (against Israel)… For this reason, an attack on Syria is considered an attack on Iran and its allies (in the region),” Velayati said. (Mehr News Agency, 26 January)

UPDATE: Mehr News Agency now reports that the quotation credited to Velayati, that an attack on Syria is considered an attack on Iran, was a mistake and it was the result of “unintentional misunderstanding” by its reporter who interviewed him.

Note: The retraction by Mehr could not possibly be as a result of “unintentional misunderstanding” of one of its most senior reporters. The quotation was very clear. What Velayati said is not “official” Iranian policy, and it appears that he should not have made the comments in public.

And it's not infrequent for we here in the United States to see our public officials retreat from their comments made in public. So we certainly shouldn't expect it to be different in Iran.

Iran is under one of the most worst dictatorships of its kind.
Don't compare a Religious Dictatorship to a Democratic country like America.
We know you try hard to peddle your garbage because of your loyalty to the paymasters.

Even the most deluded child knows that Iran will come to the aid of Syria if there is ever even a remote possibility of the legitimate Assad regime ever floundering. All the objective military analysis from Syria now indicates that the brave and cohesive Syrian military if on the offensive and now has regained total control of marginal areas that the NATO/US funded Salafi terrorists had taken. The fact remains that the US is now an official sponsor of global terror and literally going bankrupt due to endless warmongering for Zionism. Syria will come out of this mini-crises just fine and strengthened with a superb battle tested military with perhaps the best COIN (counter insurgency) capability in the whole chaoitic Arab world. Iran is the primary power in the region and a historic ally of Syria so this statement by Dr. Velayati should te taken as a sign from the combined Iranian leadership. Iran will defend its allies and interests. PERIOD.

Personal attacks against a respected blogger who knows more about Iran and its military geo-strategic position is hardly a very mature way to vent your ignorant frustrations. Mark's comments denote the obvious unity amongst Iranian top leadership on the Syrian situation. Make no mistake about it, Iran will stand by its Syrian allies.

Even in Assad's coastal retreat the war has come with bands of rebels consolidating their positions in mountains above the wealthy playgrounds of the town of Latakia.

It's very comforting to know that the Islamic regime has decided to attach itself to Assad's sinking ship,therefore taking down both dictatorships to the bottom of the ocean.

No kidding sparky. Where do you get your "intel"?debka..LOL.

Instead of living up Syeed Ali's backside take your head out and look around you and learn.

A word of advice for the naughty children here who do not understand political dimensions of government change. Firstly, the Assad regime of Hafez (father of Basher) faced a more serious challenge in the 80's and overcame it. The son is facing this largely foreign instigated "democratic" movement for the last 2 years and still standing. In comparison, the Shah lasted one month after Jaleh square massacre, Mobarek 6 weeks after Tahrir square camel attack on demonstrators and Ben Ali in Tunisia mere 2 weeks. This just proves that President Assad has the MAJORITY support, a very loyal and motivated multi-confessional military and powerful backers in the international community including Russia, Iran, China, India and the silent global majority. Even western public polls give him over 70% support base including 2 million Christians, 7 million Alevi-Shia, Druze and 3 million Kurds. Even amongst the Sunnis he has over 80% support or more. So kids don't count on him leaving anytime soon. Just a reality check.

It's very comforting to know that the leadership in Iran has decided to throw their lot in with Assad's dying regime. As the saying goes; "You can't flog a dead horse",comes to mind.
As for the "respected blogger" part then that is in the eye of the beholder.
Mark's comments denote the obvious stupidity of both him and the crackpot regime that he hankers up too.
So keep your ignorant facetious comments to yourself.

Here is a more grown-up view of the Syrian situation and why Assad will remain in power for the foreseeable future:

But Western diplomats are wary of the coalition's disunity, and are mindful of the spread of weapons to Islamists in Syria and across the volatile region.

French forces are currently battling Islamists in Mali, the insurgents armed with weapons thought to have come from Libya after the Western-backed 2011 uprising against Muammar Gaddafi.

"We have also learnt from experience and we're seeing it in Mali with weapons that came from Libya to the armed groups there now. What we don't want is weapons falling into the hands of the wrong people," the French source said.

Complicating matters are apparent divisions on how to handle Islamist groups such as the al Qaeda-linked Jabhat al-Nusra, one of the most coherent and disciplined anti-Assad forces in Syria.

The United States has proscribed the group as a terrorist organisation, and Britain is understood to share its concerns.

"It is a concern that the strongest groupings are Islamist fighters possibly linked to al Qaeda, and that clearly is a vital national interest for us to make sure that does not happen," said a Western diplomat on condition of anonymity.

90 days is about all he has left..... and the support from Russia has melted and claims of support from China and India and the world are mythical

Anon 10:53 PM.....Go and read some history books pal and stop your BS and false assumptions as regards Iran's history.
Jaleh square "massacre" happened in September 1978 and the Shah left his country in January 1979.So how is that "one month" ?
Your support of the butcher Assad is a sure sign that you are a little mozdor of the body amputating anti human terrorizing regime in Iran which is supporting a military dictatorship that has really massacred tens of thousands of its own people in Syria.
You can jump up and down as much as you like,Assad is a goner pal.