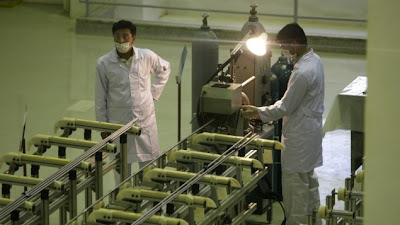 Iran has denied reports of a major explosion at Fordo uranium enrichment plant near Qom. The Times of London yesterday quoted Israeli intelligence officials as confirming that a major explosion has rocked Fordo last week. International news agencies, however, have not been able to verify the report that originated at a right-wing website on Friday, citing information from a former Iranian intelligence officer.
Iran's semi-official news agency ISNA quoted Brig. Gen. Massoud Jazayeri, a military commander, as saying: “I deny an explosion at the Fordo site.”
Atomic Energy Organization of Iran (AEOI) deputy director, Shamseddin Barbroudi, also denied the report of an explosion in Fordo. (IRNA/Reuters, 28 January)
File photo: Isfahan uranium processing plant, 2009 (AP/Vahid Salemi)
Posted by Nader Uskowi at 8:00 AM

A year or two back, there were rumors of an explosion at Qom based on a "loud noise" that turned out to be false. Here in the Bay Area, we hear loud noise coming from our metro airport, pretty regularly, with jet engine tests during routine maintenance.

Going back a few years more, we had an experimental rocket test failure here in the States. It didn't make news in our MSM. But any rumor of an explosion in Iran makes front page news here in the West. Ever wonder why? Read "Going to Tehran" and find the answers.

flog it any harder and you'll have to stand on street corners throwing copies at passers-by.

maybe you can give away copies of The Satanic Verses so folks can understand why that vile ugly hate-filled old man was demanding that the author be murdered.

SHEER NONSENSE & usual psy-ops by some fake "defector's" website in California. No one, even the Zionist media took this "news" seriously, NOT EVEN Debka. LOL. Get real folks.

It have even been discredited by the Pentagon. In days of satellites only complete cretins would believe such idiocy.

Great Job! Love how Persians are getting the job done and very thankful too!