Obama to Nominate Jack Lew as Next U.S. Treasury Secretary 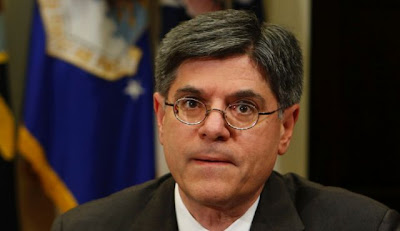 U.S. President Barack Obama will nominate his chief of staff Jack Lew as the next Treasury Secretary on Thursday, Reuters and Haaretz reported today. Before being named Obama’s chief of staff last year, Lew served as the White House budget director.
Lew has strong relationships with U.S. congress. He is an Orthodox Jew with close working relations with Israeli envoy to the U.S. If confirmed, he will lead the department that is in charge of designing and enforcing U.S. sanctions against Iran.
File photo: White House Chief of Staff Jack Lew. (Reuters)
Posted by Nader Uskowi at 9:00 AM

Another Zionist Jew at the helm in deadbeat US. What a surprise? Obviously there are no qualified "white European" background people left to do any government jobs anymore? Have to be a Zionist to get ahead. LOL

In the United States there isn't an established religion and there are no panel of vile old men who think that their idiotic vision of God wants conformity.

Iran's regime is a stench in the nostrils of all and makes a mockery of Islam.

Your conclusion comes from ignorance and total lack of knowledge of the American political system. It was during Lew’s tenure as the White House chief of staff that the relations with Israel has reached its lowest point in history.

You must be kidding! US "relations" with the Zionist entity are never going to be "low" as long as they dominate US institutions. The last creep Stuart Levy tried and failed to choke Iran for 8 years. This loser is not going to accomplish much either besides the continuing pillage and bankrupting of the deadbeat US economy or lack of it. You guys seem clueless about global realities and posting crap is like peeing in your pants on a cold Tehran winter day, it may make you feel warm and fuzzy for a few seconds and then reality and the mess sets it. These Zionists and their scams are running the US into the ground. In mere 65 years the US is on a complete downward trajectory from health, education, social to fiscal backruptcy. However, continue the delusion. The British empire took 300 years to collapse, while Zionist domination of US and endless warmongering accomplished this feat in mere 65 years. BTW, how come you don't post the Ironophobic racism in US, a 78 year old Iranian storekeper was murdered in Jew York this week due to racist hate crimes?

jack lew or jack jew, lol??????/even though i like jewish people and have nothing against them,but zionism is a major ,major problems in the world.

Zionists have bled the US treasury dry. This report today confirms US irreversible decline so it is not in a position to do much to Iran or anyone else as it is a Bangladesh of the Americas.

128 million Americans are now on government programmes. Can America survive as the world’s supposed superpower?

The United States isn’t just gliding towards a continental European-style future of vast welfare systems, economic decline, and massive debts – it is accelerating towards it at full speed. Or as Acton Institute research director Samuel Gregg puts it in his excellent new book published today by Encounter, America is already “becoming Europe,” with the United States moving far closer to a European-style welfare state than most Americans realize.

In terms of indebtedness, America is well on the way to financial ruin, with total national debt already exceeding 100 percent of GDP according to the OECD, with publicly held federal debt projected to exceed 100 percent of US GDP by 2024. America’s government debt as a percentage of GDP (109.8 percent) based on 2012 figures now exceeds that of the general Euro area (100.6 percent), as well as France (105.1 percent) and the UK (105.3 percent). Only Greece (181.3 percent), Iceland (124.7 percent), Ireland (123.2 percent), Italy (127 percent) and Portugal (125.6 percent) currently exceed the US in terms of government gross financial liabilities as a percentage of GDP.

Former chiefs of staff or elections chiefs like D. Axelrod and Rahm Emanuel, who came to the US as a child with jewish parents, D. Bernanke and A.Greenspan are another examples to your thesis about Jewish influence..

In Syria the West uses false arguments that Alawites are overrepresented at the expanse of Sunnis. They don't mind an overrepresentation by certain ethnic groups in their own countries...

When those relations went to the lowest point, so it was good for the Islamic Republic or Iran as somebody wishes to call.

And it looks like it was a sore to your expectactions and plans.

Obama is still learning to be politician and the efforts and news that Michelle Obama's uncle is an Ethiopian Jew apparently don't make differences expected by the "Lobby"..