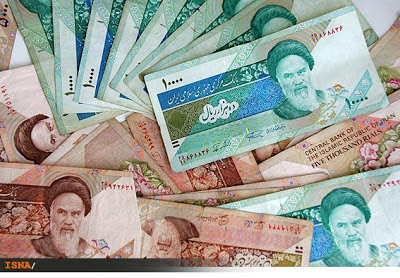 The Iranian currency hit a record low against the dollar on Thursday, trading at 40,000 rials to a dollar in Tehran’s open markets. The previous low record was hit in October 2012 when the exchange rate sank to 37,000 rials/dollar, causing currency crisis and protests in the bazaar.

boy, it seems that every other week Nader Uskowi runs this same thing saying that the rial has reached a new record of worthlessness.

if people would only stop noticing, everything in Iran would be wonderful....


we must all be like Skidmark Pyruz and never tell the truth ...because he's among the bodyguard of lies surrounding it

So it is a "very good" news for the authors and most of the guys on this blog, and they apparently wish that it will worsen......, but these wishes are kind of futile delusions...

Are you saying that the rial did not hit a historic low of 40,000:1 on Thursday? Do you agree that 40,000:1 ratio is a historic low for the rial? You should concentrate on the message: the overused and tired tactic of blaming the messenger to change the conversation doesn't work here. You need to get a bit more creative!

How many rial does it take to get Big Mac & fries in Tokyo???

Why do you think the rial plummeting is good news for the authors of this blog? Why instead of offering analysis on other people’s motives, don’t you give us your analysis on the falling currency? What is the cause of this currency crisis? Or do you believe that saying the rial is falling is a futile delusion? Really? Are you OK?

"Today’s plummeting of the currency to 40,000:1 means that rial has lost two-thirds of its value in one year"

"Today’s plummeting of the currency to 40,000:1 in one element of Iran's multitiered exchange rate system means the rial has lost two-thirds of its publicly traded domestic market value in one year"

This clarification is distinct.

And president Nader has said that Mark has opposing views to his own. But Mark on order or " voluntarilly" redesigned the blog's web page so there has not been "Recent comment" section like before and where at the all bloggers' posts are the times (with minutes), except articles where president and others write that some article was posted "couple hours; or days ago".

In the old blog format, I have noticed that Mark and president Nader sometimes arranged a discussion right under the Nader's article. Mark's first question, and president's answer as well as Mark's final comment could be characterized as a ridicule of the Islamic Republic actions..., however recently president Nader has stated, that he (at the begining) realized that Mark has opposing views to his own.

P.S Please forgive me some mistakes in my posts. Some mistakes (wrong letters) come up without my knowledge and after I pressed the "publish" button.

Mark at his 12:20AM's post clarifies and specifies doubts about your article where by my judgment too, you try to manipulate information.

There was an article about Gen.H. Firozabadi, where you had omitted main part of General's statement, that the Patriot system in Turkey was deployed to protect Israel. With that your ommision you stated to readers of your article that General's irresponsible comments bring harm to..."Iran?"

Firozabadi is the laughing stock of Iran.He reminds us of that fat man in the TV series Zorro.There must be a very good reason why they call him Boshgeh (Barrel).

What does all those sentences you've wrote have anything to do with rial's exchange rate; or do you need to change the conversation?

There we go again! If you don't have anything to say on the subject of the post, why do you see yourself compelled to post a comment, here on Firouzabadi?

Yes, of course. Thanks.

And to make it even more distinct, we should say that the plummeting of the currency to 40:000:1 in 'the most important element of Iran's multitiered exchange rate system...'

The distinction is between publicly traded market value of the currency, determined by the market, as opposed to government-set rates that are arbitrary, and one of the main causes of corruption in Iran's trades. [With "preferred" importers buying (or borrowing) dollars at "low" government rates to import a commodity, normally at huge volumes, and selling it at the high market rate (and oftentimes not paying back the original loan). Ahmadinejad has recently discussed this phenomenon in length]. Iran needs to let its "multitiered" rate system end and rely on market rate instead. That multitiered rate can only cause corruption.

forgive me, Nader, for my satiric comment of 10:33 meant to mock all the absurd criticism offered by commenters who so often complain that reporting the bad news in Iran is almost as bad as the news itself.... which is never REALLY bad news but part of wonderful plan by brilliant men who have supposedly made Iran a superpower