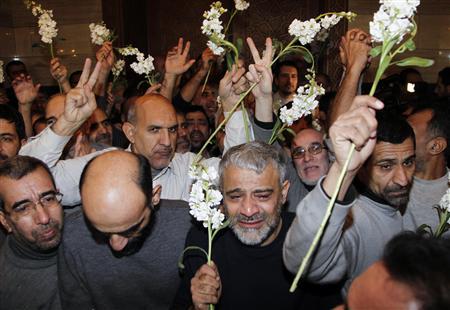 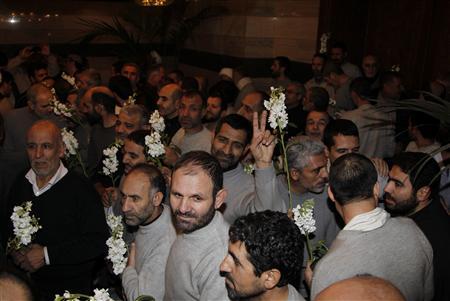 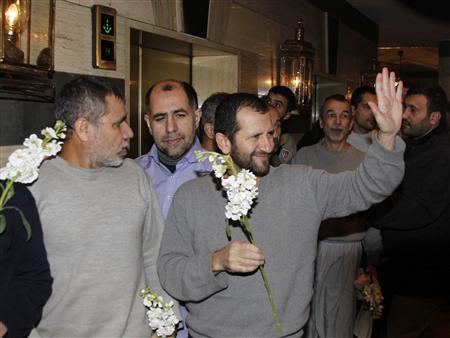 Forty-eight Iranians held hostage by Syrian opposition fighters since August were freed today as part of a prisoner exchange deal that also freed 2,130 prisoners held by the Syrian government. The Iranian embassy in Damascus confirmed the release of the 48 Iranians.

The prisoner swap was arranged by a Turkish charity. The Syrian opposition had announced that the 48 kidnapped Iranians were current and former members of the IRGC. The 2,130 prisoners freed by the Syrian government included many Syrian opposition fighters. 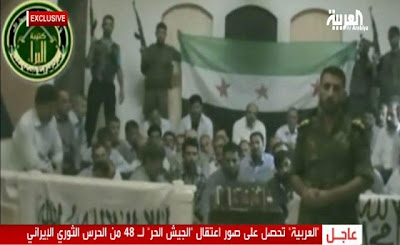 An image grab taken from Al Arabiya TV on 5 August shows Iranians kidnapped in Damascus.
Posted by Nader Uskowi at 9:28 AM

Great news and a job well done. These were innocent civilian pilgrims as can be seen by the photos alone, however, they will provide valuable intelligence on the Salafi murderous cutthroat terrorists who are being killed like the dogs that they are by the brave Syrian military. Despite 2 years of terror these Salafi terrorists in the service of US/Zionism have not been able to hold on to a village let alone topple the rock solid legitimate government of Preesident Assad. The idiotic Salafi terrorists attempt to capture Aleppo airport resulted in their mass slaughter by pinpoint accurate Syrian airstrikes, even according to their own propaganda websites. All kudos to Iran and Syria for standing tall against the Salafi vermin.

Yes how "brave" the Syria military is by slaughtering innocent men,woman and little children.
Since you feel so strongly for Assad why don't you go and join his death squads?
But a word of advice,you will be on the losing side.

You obviously missed the instructions of your daily hasbara script.LOL. Even Zionist websites today are acknowledging that President Assad has basically won and is here is stay. Too much delusion is not very healthy.

The FACT of the matter is that Syria, largely thanks to Russian, Chinese, Iranian, Indian and majority of world support has turned the corner as the Salafi terrorists are losing at every front and by their mass terror, murder and rape are alienating most Syrians. Almost 90% of the so-called "opposition" is composed of paid foreign mercenaries from the Persian Gulf petro-pimpdoms, Pakis, Taliban and other western recruited terrorists. Most western madia now report that the majority of Sunni Syrians even support the legitimate Assad government. BTW, the cohesive and superbly brave Syrian military is almost 70% Sunni. The three-way prisoner exchange of thousands of Syrian, Turkish and Iranian prisoners Wednesday, was the first major deal between the resolute Bashar al-Assad and the fractured and demoralized western supported "opposition", which now is mostly on the run. This important turning-point in the 2 year Syrian conflict was made possible by President Assad's supreme confidence in his survival, unbreakable military and the Salafi terrorist's realization that it was their only chance to save some of their men and get out while they can. The mostly captured foreign terrorists include a large number of regular Turkish army men who had been captured by the Syrian forces. The swift safe release of the Iranians will bolster Tehran's position even further in the region and also strengthen Iranian intelligence capability. The foreign funded and armed Salafi terrorist groups are increasingly outgunned, isolated,demoralized and outnumbered by an emboldened Syrian military flush with new weaponry, better intelligence and growing regional and international support. President Assad with his courage and steadfast approach has indeed won the day. Repulsive Saudi Wahabbi clerical fatwas to rape Syrian women and plunder civilian homes has hardly gone down too well with the Syrian population that is increasingly rallying around the resilient Assad government.

These guys don't look like pilgrims. Not one wife or kid came along with them. They also all look like they are in shape. Not even one fat guy? Maybe they should hire some females so thir cover would be more legit??? Just saying...

Don't worry more of these healthy and fit looking pilgrims are on the way from Iran, Iraq, Lebanon, Pakistan and many other Shia communities in the region led by the biggest tour operator in the region General Qassem Soleimani.LOL.

They appear to have a worried look on their faces, not a truly jubilant look and smile of being free & still alive. Maybe they did not follow orders and were captured, maybe they know that their own regime is not through with them yet.....I guess I would look worried too if I had to deal with Iran's thug government!

it's going to be bloody long battle ...iran wont give up on syria ,

Very rational assessment of the unfortunate Syrian situation which some of these IGNORANT and FOOLISH one-dimensional anti-Iran posters do not understand. Whatever government would have been in power in Iran it would have still supported Syria to the hilt. It is not Iran alone but the strategic interest of over 200 million Shias to ensure the survival of legitimate Syrian govenment against the coalition of US/Zionists, NATO puppets and the Persian Gulf Salafi/Wahabbi bedouin idiots led by the corrupt house of petro-pimps Saud. Fortuntely these puny Arab puppet states, besides money, simply do not have the manpower or guts to topple Assad. This will indeed be a long fight and Russia, China, India, Iran and with the majority of global nations support will win. US has as usual collected a coalition of stooges and hyeanas, but the Syrian military is tough and cohesive and there are many allies to fight the Salafi/wahabbi terrorists. Turkey itself is imploding by murdering Kurds in Paris and cracks in the military. What these idiots do not understand is that Turkey is very frail and will fall apart as it has 20 million Alevi-Shia and over 20 million Kurds seeking independence. EU and US are deadbeat bankrupts and simply would not be able to support Turkey facing economic and political collapse if the war in Syria spreads. Iran, Russia and China's position is sensible and strategic. One has to admire President Assad for his courage and supreme confidence as he has over 80% support of his people. Almost all the Salafi terrorists are mercenary imports who are committing mass crimes and alienating every sane person in the world. Iranian position is being vindicated by the day.

You must be full of dung to write such claptrap!
We will see who has missed their daily "hasbara script".

Who gives a damn about the Shiite cause.Iran is first before any made up religion.This regime hasn't the slightest interest of Iran at hart,except for being Shiite. Christian Jew Sunni Shiite Baha'i or Zartosht as long as your Iranian that's want counts.

Hostages' release shows strngth of Iranian diplomacy and the influence over its Syrian friend.

It also shows that Mr. Assad is still strong (and not "thrown under a bus" like "president" Uskowi wishes), since he is still able to release large number terrorists and misguided opponents...

Taftanaz a military airbase in north-western Syria has been overrun and captured by the FSA.
So much for some idiotic claims by some of the cyber basij on Uskowi that say Assad is winning the civil war and Iran or more precisely Islamic terrorist regime is an emerging power in the region.Because Iran is the main victim of these pieces of vermin claiming to rule in the name of god.

You need some serious lessons in your hateful and compulsive constant lies.
Like it or not Assad and the regime is finished.80% LOL!! And what ever the EU or US is,it isn't as bad as Iran is under the cultist fascist mafia of mullahdom.Because if it was you wouldn't be living in the West like a little hypocrite typing your daily nonsense on the net.