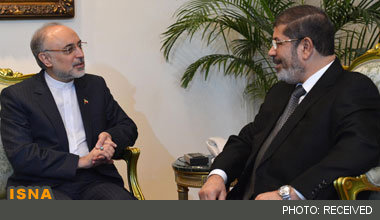 Iran and Egypt still do not have full diplomatic relationship and Iran is represented in Cairo by an interest section. The two countries also strongly oppose each other’s policy on Syria.

This is good news as Iran and Egypt are the natural leaders of the region with strategic mass (Egypt with 84 million people and Iran with 80 million) and solid military power to check Zionists. The body language in the photo shows warming ties. Iran and Egypt need to create a more positive regional situation that rejects foreign meddling.

Don't be so naive! The body language of the foreign minister of Islamist occupied Iran shows of a man unsure of himself.
Egypt can't move a glass of water without the permission of the US,because the US finances billions of dollars to the Egyptians.
Without US and Saudi financial assistance the Egyptians are a bankrupt country.
As for Iran it has pressing problems of its own,like huge unemployment,hyperinflation,collapse of the rial,huge incompetence and care less attitude of the bankrupt and corrupt anti Iranian Islamic theocracy.
The very last thing the Iranian people feel or care about is confrontation against the US or the Israelis.
Iranian people want freedom,peace,stability,jobs and a secular Iran without the daily bickering and interference of a bunch of backward clerical fascists and their minions breathing down their necks.
Mullahs belong in Mosques and funerals not the Iranian parliament.

Dream on from foreign lands far away and keep reading from the hasbara script.LOL.

No buddy,you're the dreamer here!
Your head is so deep up your imaginary "Zionists" backside that you have become blinkered by it.

all nations in the region and beyond will follow iran, it is just matter of time, iran is the beacon of resistance.33 years of hostilities and crimes against iran is great indications of independence and strength of iran.if iran was a client state as it was before.every thing would be fine with u.s and rest of western stooges.they hate iranians because we got free. hillary clinton said, we lost iran,it got us by surprise,we will make sure no other country can get away like iran did.iran today is free and independent.iranians are very religious people this what they voted for,majority rules.

We got free? You mean mullahs and their criminals got free to rape torture and kill innocent Iranians because they want freedom from terrorist "religious" mullahcracy.
Yeah sure the Americans got caught out by surprise,LOL! If you believe that then your,re more the fool. America planned it from the beginning to install the fascist theocracy for the purposes of looting and enslaving Iran,you dummy.

If the "majority rules" in Iran then why is it in every street corner of cities in Iran there are armed Basij and IRGC security units keeping an eye on every Iranian citizen?

If the "majority rules" in Iran why doesn't Khamenei,the butcher of Iranians allow free elections without his goons clubbing,shooting,imprisoning, raping,torturing and killing the population?

I tell you why they don't,because they are the minority that is armed to the teeth and scared to death in case the population might rise up against the regime. Someone like you must be made of clerical manure and might be a possible little cyber dummy for the occupying clerical mafia.