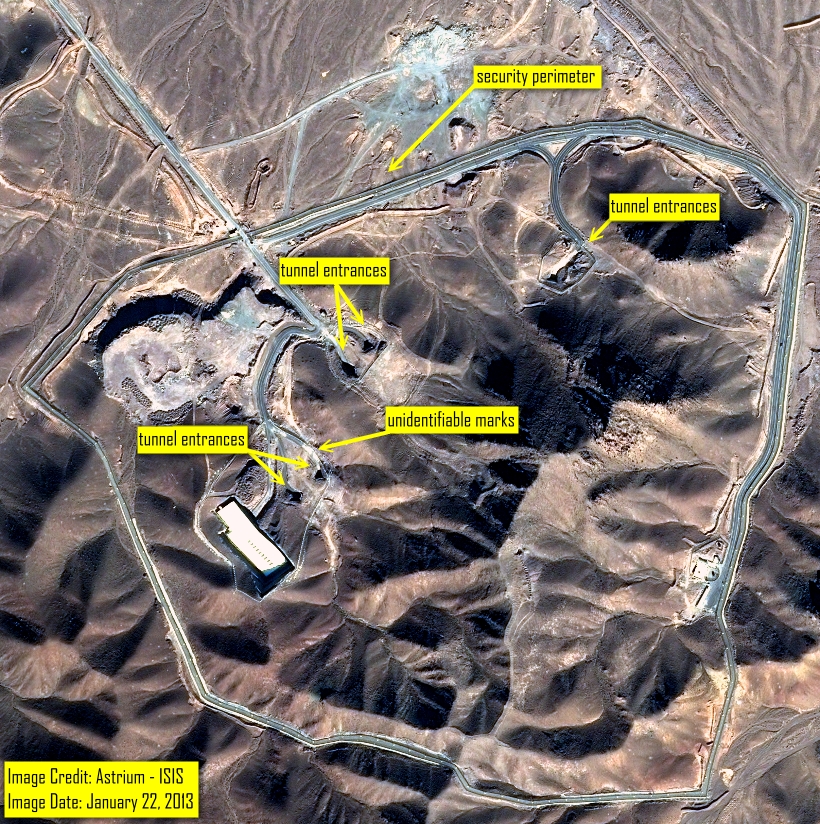 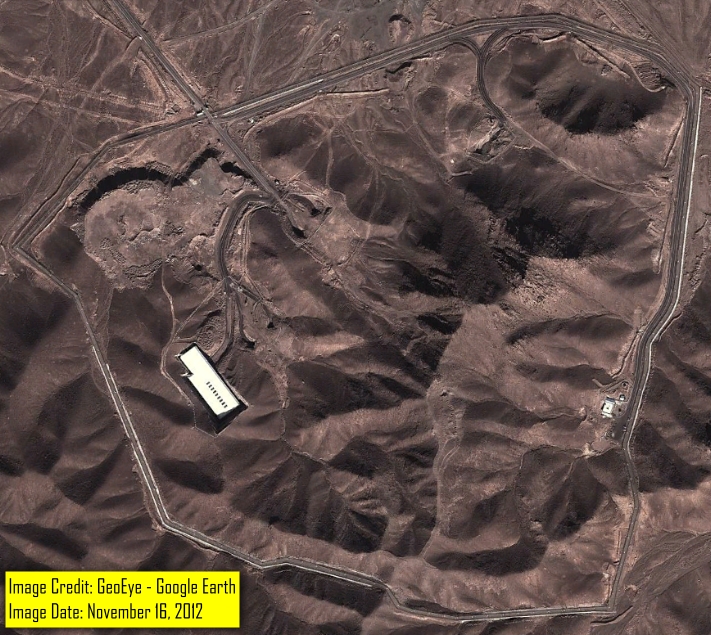 Institute for Science and International Security (ISIS) today released Astrium commercial satellite imagery of Iran’s Fordo Fuel Enrichment Plant taken on 22 January, a day after the website WND had claimed that the site was the target of a major explosion. The imagery (top photo) shows no exterior signs of an explosion or major damage. As ISIS experts have observed, there are no “intensified activity in the form of emergency or cleanup vehicles that one would expect to see around the site in the wake of an incident of this magnitude.”  (ISIS, 30 January)
During the last few days, Iranian, Israeli, and U.S. officials denied that sabotage or a major incident occurred and IAEA concurred.
Top photo: Satellite imagery of the Fordo fuel enrichment site from January 22nd, one day after the reported explosion that caused major damage to the site. The imagery shows no damage to the outside and no discernible signs of emergency vehicles or activity at the tunnel entrances. (ISIS)
Bottom photo: GeoEye imagery from Google Earth of the Fordo site two months before the alleged underground explosion at the site. (ISIS)
Posted by Nader Uskowi at 4:30 PM

Most everything related to Iran in MSM coverage and newswires is factually wrong or distorted. That's why it's best to wait for confirmation by corroborating evidence (such as verification by Iran, video or photo evidence, on-site neutral observers, etc.)

Unlike citing ISIS which is heavily agenda-driven where it concerns Iran, there are neutral sources available with far better professional qualifications that Albright of ISIS. such as:

But if the name of the game is not accuracy but instead the demonization of Iran, than Albright and ISIS are the go-to people, no matter how many times they've been wrong in the past, as well as helped bring about a previous war in the Middle East based on trumped up and factually wrong evidence.

ISIS had released satellite imagery of Fordo the day after the reported explosion, showing and saying that the report was false. What’s your objection to the report?

“But if the name of the game is not accuracy but instead the demonization of Iran…” What is it in this post that ‘demonizes’ Iran? You are going too far on your attacks and it is not appreciated.

demonization of iran is u.s main policy ,it is not particularly isolated to this incident.