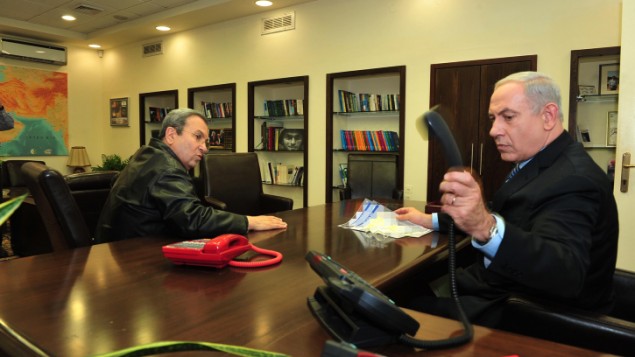 
“Netanyahu and Barak put the emphasis or at least created the impression that they prefer a military action, and for that sake let loose a great deal of threats against Iran, to the point that the public and the international community in 2012 felt like in just a minute, the Israeli Air Force receives the order to attack.”

“Former Prime Minister Ehud Olmert claimed that during the Netanyahu government, NIS 11 billion ($805 million) was wasted on "delusional and adventurous" plans – however, the truth, unlike the political rhetoric, is more complex.”

Greastest political blunder of the year by the mischievious Zionazis! Ha!

Netanyahu has wasted a great deal with his scare talks concerning Iran as well as betting heavy on the wrong horse in the US presidential election. Now he's left scrambling to put together a govt.

What this article fails to admit completely is that while a portion of these billions wasted were probably exaggerated in amount for the sake of disqualifying a political opponent (part of the political game in all classical fashion, no one can blame anyone for distorting or at least heightening a given reality), no matter from the perspective from which you look at them, all this "training and equipping" the air-force apparatus for a mission that will most probably never occur remains what is it : a massive waste. They author seems to be undertaking a vain effort of painting all these hollow Iran attack projects and their absolutely real and abysmal costs and consequences for the Israeli public in a greater scale of social disarray, as necessary and sustainable for future generations. The latter assertion is at most only partially true, and even then still void of concrete usefulness with regard to the ratio between the expense intensity and the actual strategic need. So anyone stating that the Bibi government has made an all-Iran policy the exclusive cornerstone of everything his coalition was willing to "give" the public, (virtual scenario, real costs) is indeed true for me. And this author talk about the Egyptian border fence and the undercover campaign against the Iranian nuclear program (acknowledging many illegal and unsanctioned acts of war in the process, in case you haven't noticed) are a means of diluting the reader's attention to the much narrower scope of reflection needed to understand a simple, ongoing, and failed policy that is eating Israeli society at its core (and whose discontent was brilliantly displayed in the latest election race), just like Iranian leaders are doing with their own people, with the fanatical character of the regime on top of it as a special bonus, of course. In simple terms, the author prefers burying its head (or attempt to bury ours) deep into the sand rather than admitting ANY kind of wrongdoing, miscalculation or simple personal enrichment of a ruling elite from the top of a military-industrial establishment, Khatam al-Anbia style. So basically, nothing was wrong, and everything justified/necessary/understandable/noble/responsible from the Bibi government. So why are we all stupid yelling all the time about ? that's right look at the article, everything's just fine, sit back and relax ! The thing is, it seems that close to 50% of Israelis disagreed with that last time they went to the voting polls, and refused to endorse this kind of highly wishful thinking in a time of heavy, never seen before kind of economic crisis for the country (and its arch-enemy).

Without any real military movement by IRAN but merely rethoric over wiping the state off the surface of the map, has turned the Zionist Regime State of Israel to its real condition of being scared and haunted by its own self-created shadows upon its evil deeds of the past in the region. The fact is, Israel, militarily, is too little to take on IRAN. What a dream!

WE DEMAND A FULL INQUIRY ON THE USE AND destination of that colossal amount of public money-OUR fear is that it may have ended UP in an off shore bank account!.