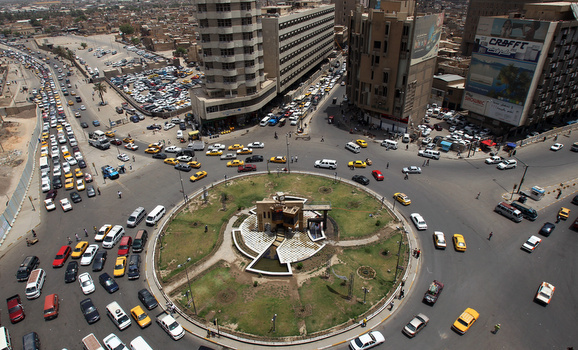 Iraq has banned the import of Iranian-made cars. Iran exports popular Saiba and Samand models to Iraq. The ban went into effect at the beginning of the year. The Iraqi authorities blame alleged low-quality manufacturing and sub-par safety rating of the Iranian cars as the reasons for large number of fatal accidents involving those cars and hence the decision to ban them altogether. (Tabnak, 19 January)

The imports authorities also cited fuel standards used in Iranian cars as a main reason behind their decision.

“Iraqi fuel is well refined, something that Iranian companies have not observed,” said Adnan al-Sharifi, the CEO of the state-owned car-import corporation. (Al-Monitor, 19 January)

Photo credit: An aerial view of Baghdad's Khilani Square in central Baghdad. (Saad Shalash/Reuters/Al-Monitor)
Posted by Nader Uskowi at 9:30 AM

I don't quite get the fuel standard reasoning. Are they saying the Iranian cars run on fuel of a standard less than the lowest octane being offered at Iraqi service stations? The engines in those cars are of european design, so that doesn't make sense.

Quality control, on the other hand, is an issue.

It be great to have access to export/retail sales figures for these cars.

“Iraq is setting forth a plan to import cars that suit its fuel resources,” said Adnan al-Sharifi, the CEO of the state-owned car-import corporation. “Iraqi fuel is well refined, something that Iranian companies have not observed,” he added.


I do recall reading that Iran has banned imports of some foreign-made motor vehicles.

multiple reports of such last November/

Iraq will overtake Iran in many areas within a few years if the people of Iran can't shake off their ball-and-chain regime.

In reality this is peanuts as only about 5000 cars are involved and this will soon be overturned like most other "Iraqi decisions". The fact is that Iranian economy is doing quite well despite US/Zionist pressures to break Iran. Infact, I believe that Iran will come to thank the US and its Treasury Zionists like Lew for detaching them from the bankrupt and weakening dollar system, because it means that a hybrid superior and sustainable system may now be adopted in Iran and in Asia, one based firmly upon the values that underpin all the great nations and Iran's strong geo-strategic position in the heart of rising Asian millenium.

The US trade position is so weak now that it is the new Mali or Bangladesh of the new Asia centric global trading system. Besides war and violence exports, the deadbeat US does not account for much now. Economic pressure on a large historical mercantile nation like Iran only brings more innovation and improvements. As most of the adults have commented before, the sanctions and economic warfare against Iran will prove to be a blessing and inspire more KHOD-KAFEI (self-sufficiency) as Iran's domestic consumption and manufacturing takes off. Let's not forget Iran is a rich large nation with 80 million consumers sitting at the crossroads of world trade routes amongst over 3 BILLION Asians with rapidly growing econiomies. India and China alone now account for around half the world's population and these trade links will keep on benefitting Iran. Only losers are deadbeat warmongering US/EU bankrupt economies as the wars now move to Africa as the Jihadis and US and its NATO puppets get sucked into the worst quagmire so far and putting further pressure on global energy markets as Algeria and Libya implode, making Iran even more important. Iran is a blessed land indeed.

the Iranian economy is not doing well, and only a fool, idiot or liar would say that it's a fact that it is.

This news is not true
Iran car export to ira continues

It is interesting that the ISNA piece repeats the Al-Monitor story cited here verbatim, including the two quotations by the management of vehicle imports corporation of Iraq about the quality issues and fuel incompatibility with the Iranian cars. ISNA adds however that the Iraqi trade minister has denied the report. Hope we can get the true story sooner than later.

Correct, as the grown-ups posted this was a usual erroneous or an exaggerated "report". The FACT is that the Iraqi economy, particularly, in Basra and the Southern Shia dominated provinces is heavily dependent on Iran. Just visit any shopping centre in Basra, Kerbala, Najaf all the way to Baghdad and even places like Hilla, Tikrit and Al-Anbar, Iranian goods are everywhere. Iraqi electricity grid is quite linked to Iran as well and they coodinate policies in OPEC and on regional situation. So let's go easy on wishful thinking in the New Year..eh.

SEETHING WITH RAGE!
The west are pushing Iraq to cut down the IRANIAN automobile industry that seems to be immune to the cruel sanctions.HOWEVER THIS SAD STORY comes as a great advantage to the IRANIAN Nation.And this is how the world is receiving the news .

REALITY ONE-So the great Nation of Iran has a vibrant auto mobile industry producing some FAIRLY quality cars that have some customers in the GULF NATIONS!.

REALITY TWO-If Iran under sanctions can afford to sustain and afford to produce export quality vehicles,could this be one among the many reasons the west FEAR that someday IRAN might pose a serious challenge to them[west].

REALITY THREE-THE clumsy reasons given by the Iraqi Official does not hold water and one can easily smell politics in the move!SINCE WHEN DID THE IRAQIS start 'refining oil well' on their own!.

REALITY FOUR-defects and challenges in the automobile industry is something normal as we saw the other day ,when Toyota recalled hundreds if not thousands of their vehicle that had some defects,so if that can happen to JAPAN!,it then rises no eyebrows on IRAN!.

conclusion-LONG LIVE THE IRANIAN LEADER FOR GUIDING THE NATION WHERE IT IS NOW in the automobile industry-a feat no Gulf Nation no matter the intense in liking the BOOTS OF THE West wont afford to catch up with a sanctioned IRAN FOR MANY YEARS TO COME!!.

These autos made in IRAN are by far the worlds best, the europeans and russians want them badly also china and india are calling for US sanctions to end so that they can start importing these new high tech autos many cubans and people in venezuela love these autos and will stop at nothing to obtain one also our glorious leadership in IRAN has just signed a new deal with the dear peoples leader of north korea to ensure all peoples of north korea will have an Iranian made high tech auto.

The claim that Samand is a challenge to the West is a bit exaggerated, even for you sir. They are relatively inexpensive cars, they sell for around $8,500 in Iraq. They look good. But their quality and safety standards are sub-par. Hence the Iraqi complaints that when they get into accidents, the accidents are often fatal. We see the same phenomenon on Iranian roads. If Iran wants to build a competitive auto industry, which is quite possible given more than 5 decades of experience in producing domestic cars, then the quality/safety features should be paramount in their production. Otherwise, they lose Iraq today and they’ll lose others in future.

that was quite funny. thanks for the laughs.

I can not understand what does mean incompabilty of fuel ?

Ha Ha Ha Ha!! Down with fascist mullahcracy of theocraps!

The Saipa I can understand...But the Samand? Are they kidding? Compared to a Hyundai? This smells politically tinged.

I would have to agree with Nader here, even though Iran has made big improvements since the Peykan, Iranian made cars need to excel at quality control and show visible improvements. Samand is a good car but there are too much inferior quality plastics and rough edges. South Korean cars in the 80's and 90's had similar problems and then they started cheating from Japanese TQM, ISO and other stringent quality control methodologies and improved. Hyundai and KIA are still crap compared to Japanese cars but the illfated Daewoo was even worse. In any case, sanctions and US/Zionist propaganda against Iran does not help with marketing to say the least. Iran is taking steps to clean up its fuel as the makeshift anti-sanctions refining production was not the most eco-friendly and Tehran's poor air quality speaks volumes about it. Iran will start distributing gasoline conforming to Euro-4 and Euro-5 standards from March 2013 as part of its efforts to reduce air pollution, and hopefully this will help the car industry and fuel compatability issues too and improve perceptions and exports.

I agree. I have driven almost all crappy Hyundai including their flagship Equus, Sonata (i45 in other parts of the world) and Santa Fe and they are all tinny with cheap plastics, shonky tranmissions and low quality LCD screens that go misty with cold or heat. The Sonata ratted all over with only 9000 kms on the clock and the cheap carpets looked like a hangover from a bordello. Samand by comparison feels tight and sturdy like a Euro-sedan. I think a lot of this has to do with the usual anti-Iran bias and propaganda. It is a remarkable achievement by any standard that Iran has established a viable and world class automotive industry despite all the impediments.

MAY THE ALMIGHTY ACCENT TO YOUR SARCASTIC PRAYER!! and shame the devil in you!!

your open heart advice is received with open hands in IRAN by a Cleric a student or a politician!.

however, bear in mind 'THE BIGGEST MAN YOU EVER SAW WAS ONCE A BABY'

Once again B.M.A you right your daily diatribe of Islamist inspired B*LL CR*PP!
The almighty will see to it that the people that are using his name in vain for personal gain and profit by tormenting and murdering innocent people in Iran will rot in the here after.

The Samand is based on the platform and running gear/engine of the Peugeot 405 circa 1985 model.
Where is "the usual anti-Iran bias and propaganda" in that?
The technology is twenty eight years old and is doubtful if the Iranian car industry in the present condition is a world class automotive producer.
Keep dreaming!