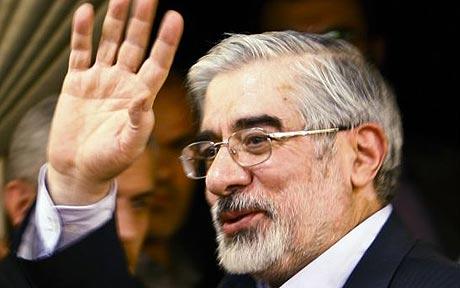 The daughters of Iran's opposition leader Mir Hossein Mousavi say they've been denied contact with their parents for about two months. Mousavi's daughters say security agents were present the last time their parents were allowed to meet with their family, which prevented them from speaking freely. (Kaleme/Agencies, 26 January)
Mousavi, along with his wife and another opposition leader, Mehdi Karubi, were placed under house arrest in February 2011 without being ever charged. His daughters today called for the unconditional release of their parents.
File photo: Opposition Leader Mir Hossein Mousavi (Reuters)
Posted by Nader Uskowi at 11:41 PM

One of the most interesting section of "Going to Tehran" by Flynt and Hillary Mann Leverett pertained to the 2009 election and Mousavi's role in the civil disorder that followed.

Perhaps the best indicator of Iran's majority opinion over such was the response to the poll question by IPI/Charney Research over Iran's law enforcement and security crackdown that restored order on the streets of Tehran, with roughly 60% approving of these agency efforts and roughly 20% disapproving (a 3:1 majority in favor, and by extension suggesting this majority approves of Mousavi and Karroubi's detention).

Then it is a question of Khamenei’s ability to make sound judgment. With such overwhelming support, as claimed, why should he order the house arrest of Mousavi and keep him under detention for three years without any charges brought against him? Even under Islamic Republic's own judiciary guidelines, this constitutes an illegal detention. It’s about time he orders Mousavi's immediate release and that of his comrades.

You can not reform this barbarian regime.A regime which is based on the principles of the book of the days of Hajar.

Pyruz--- if it was suggested that 75% of Americans or Iranians would approve arresting you, holding you without trial, and then boiling you in oil, would that be sufficient for you to approve of having yourself boiled?


how about if the Leveritts wrote that boiling you would help bring Iranians and Americans together in approval and advance peace, love and understanding?