Window Closing on Iran and Possibility of Diplomacy – Hagel 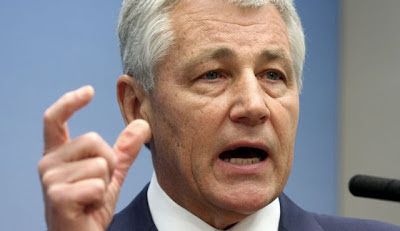 President Obama's nominee for defense secretary says Iran needs to show that it is prepared to negotiate seriously, and should face “severe and growing consequences” if it continues to flout world demands. (AP, 30 January)

Hagel added that the “window is closing” on Iran and the possibility of diplomacy. He made the comments in a 112-page questionnaire for the Senate Armed Services Committee. The panel submitted the extensive questions to Hagel in advance of his confirmation hearing on Thursday.

The Regime does not look like it is capable of doing positive diplomacy - it is a dead zombie - it is not capable of doing any Thing positive at all- it can not communicate with iranian People (no free election)- it can not communicate with outside world; what the hell are they doing with the Country ? the Regime is at this thime only a destructive force for Iran and the World ...

In other words, in order to be confirmed as SecDef, Hagel repeats the diktat that Iran must surrender elements of its sovereignty and independence, accept American hegemony in the Middle East as well as accept the mostly eastern European-sourced colonial project in the Levant, and undergo regime change in the process of accepting this diktat.

Yes Mark; Regime change is exactly what Iran needs; you try to prove that your anti-Americanism has a point; but it has not; it is the resentment of a loser who puts his ideology before what is the best for the country (sorry - I don't mean it personally); for you the destruction of Iranian economy and lives of Millions of Iranian does not count for anything; other Iranians have to suffer for you ? why? Anti-Americanism is a true lie - a necessary confusion - the world is more complicated than your binary distinction; a true lie is a more basic category that 'true' or 'lie' ; you use your 'anti-Americanism' in order to maintain a lie ; you are an irresponsible person Mark - (sorry - I don't mean it personally) ...

As everyone is aware by now the "Donkeys" are in charge of Iran and its economy.

Mark, did it ever occur to you that your Anti-Americanism plays into the hand of America ?

People like Mark their brains are frozen in the 1970s.
Because of his anti Americanism he has chosen Iran as a sacrificial lamb to be the one that has to pay the price to stand up against the "Western Imperialists" and forsake seventy five million Iranians for four million Palestinians.
As Khomeini once said,"Let Iran Burn so that Islam could be advanced".
Disgusting.

there's nearly zero disagreement within the US that the Iranian regime is not going to be allowed to assemble nuclear weapons....and Pyruz is talking out his pooper that Hagel's statement marks a distinct change in Hagel's position.


Pyruz also fails to mention that Iran voluntarily surrendered that option when it signed the Non-Proliferation Treaty.

Mr Pyruz does not display much in way of honesty with this comment....and quite a few other comments as well.

just hot air,he wants to look tough to get nominated,this for u.s domestic politics,it has no value for iran.no country, i say it again, no country can harm iran militarily.iran is too powerful.enemies of iran foreign and domestic.get a real estate in hell.it is a good place for all of you.

The 34th anniversary of the U.S.'s 'hollow' since the victory of the Islamic Revolution of IRAN back in 1979. 35 will be next.

the Soviet Union lasted nearly twice that long..... the theocracy won't match that