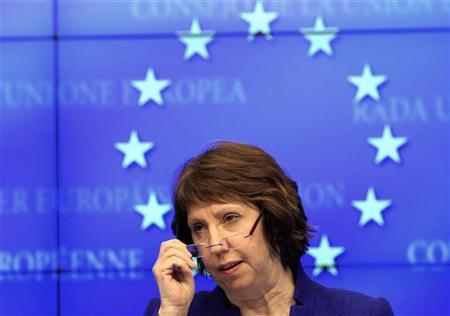 Iran is stalling on fixing a date and venue for a new round of talks with world powers on its nuclear program, a spokesman for EU foreign policy chief Catherine Ashton said today.
“We proposed concrete dates and a venue in December,” said Michael Mann, the EU spokesman. “Since then, we have been very surprised to see Iran come back to us again and again with new pre-conditions on the modalities of the talks, for example by changing the venue and delaying their responses.” (Reuters, 23 January)
Iran’s semi-official news agency reported today that Iran proposed Cairo as a possible venue, without giving any dates for the conference. Western diplomats had hoped that a new round could take place in December or January.
“The (world powers) are still hoping to reach agreement with Iran on the modalities of the talks, including venue, with a view to resuming talks shortly,” a Western diplomat involved in setting up the meeting told Reuters. “We do not exclude any, but Iran is proposing different venues all the time. The venue is not the issue, but Iran appears to be trying to delay the process by coming up with new conditions,” the diplomat said.
File photo: EU foreign policy chief Catherine Ashton. 17 January 2013.
(Reuters/Yves Herman)
Posted by Nader Uskowi at 3:34 PM

I could have told the EU ten years ago the regime was stalling.
Saving them time and money.

It is great when they waste money. I want to see them loose in every possible way.

Wow, the EU has a lot of nerve claiming "stalling" given their track record for such tactics in 2003. Read "Going to Tehran" and be better informed of the EU's merry-go rides.

The European conglomerate burned their bridges with Persia a long time ago. To the all mighty Europeans with their stalwart legacy of colonizing and expulsionistic policies, subjugation of other ethnicities, subversion and meddling anywhere & everywhere, persecution of indigenous people and exploitation of natives in one continent after the other, and subsequent mass introduction of settlers and the conquest of resources: Get over it!

If EU is nobody as you claim,then why is it you decided to live in the EU?

The biggest loser is the Iranian people.

Like it or not the regimes track record shows that they are the ones that are stalling.
The "merry-go rides" as you claim are created by the regimes constant ducking and diving tactics by the use of smoke and mirrors.

Anon 9:04 AM Khamenei has nearly $3.5 Billion in UK bank accounts.That's why the regime attacked the British embassy because Britain froze his accounts.
Mohsen Rezaii has $150 million Dollars in German,Austrian and Italian banks as well as $3 Billion Dollars in Swiss banks.
So as you know this is the tip of the iceberg when it comes to the regimes piety towards the people of Iran.And it also shows that Europe is somebody as long as it holds the stolen loot by the Islamist occupying regime from the table of the Iranian people.

Mark- really. that's your answer about the charge?


claims from the Leveritts concerning events from a decade ago????


you ever tire over playing dodgeball, kid?

WhAT a stupid posting
I lived in Thailand for a long time too
is Thailand a great power ?

Seems Khamenie is not very speed to understand
The EU Bank connection to iran was cut long time befor Attack an Britisch embassy.

If it was any Khamenie account in UK and frozen
Then it was published every where, at first by Uskowi

How can A Annoymous poster , exil iranian looser knoews about account of Khamenie or Rezaei or anybody else im iran ?

First learn how to spell "looser"you ignorant little loser then go and read some books and educate yourself in the art of writing to people properly before asking such an impertinent question.