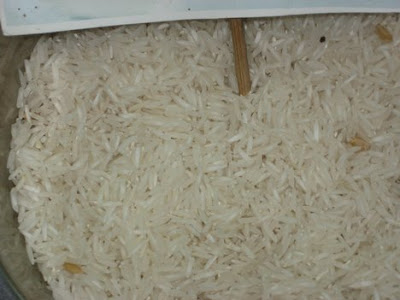 The Indian Express reported today that Indian exporters shipped more than 1.5 million tons of aromatic Basmati rice to Iran in 2012, making Iran the biggest importer of Indian rice. The Express reports that the rice exporters are the big beneficiaries of an Indian government ban on hard currency payments for the purchase of Iranian crude oil. India instead pays for oil in the local currency, the rupee, deposited in local banks that can then be used by the Iranians to purchase “cleared” goods from India, including the aromatic Basmati rice. (The Indian Express, 18 January)
On 6 February, in the absence of any agreement with the world powers on its nuclear program, Iran might be forced to practice this equivalent of barter trade with other importers of its oil. On that day, new U.S. sanction will prohibit cash payment for the import of Iranian oil.
Photo: Basmati rice
Posted by Nader Uskowi at 1:00 PM

What a joke! This will not only destroy the rice industry in Iran,but also reduce Iran's cash flow in its ability to purchase what ever it needs.
What next,bottled water?

India's sending food in exchange for oil....precisely because cash flow to Iran has been severely restricted by the sanctions.

and that is not going to change, but instead only become more severe.

be happy for Basmati rice, which is excellent, and get ready for China to pay for oil with used copies of "Quotations from Chairman Mao Zedong".

Nothing unusual about it, even the deadbeat US imports Indian basmati. Just go to Costco, Walmart or any other store. The FACT is that Iran is now dumping the worthless dollar and Euro and mostly going for barter and mutual currency swaps with rising Asia. BTW, what these one dimensional blogs don't report is that South Korea, China, Japan, India and a host of Asian nations are now Iran's key trading partners and they are operating outside the impotent sanctions regime. Iran imports about 20% of its basic staples like Rice & Wheat so this is a good deal. Considering Iran's arid soil and very little arable area, these imports would continue regardless. The world now has over 7 billion people to feed and they are not making new land anymore. Food security and water will be next flashpoint in global resource wars. The Zionists, US, China and even the puny Arabs are buying up agricultural lands in Africa, Australia and South America.

Iran is lucky to have a large natural resource rich area and a relatively small population to feed. However, agriculture and a post oil diversified economy should be a priority. Cuba is a classic example of sustainable food production despite 60 years of US sanctions and no OIL or energy resources. Iran will be able to cope just fine. Thanks for the sensationalist concern though.

For those people on this blog who think Iran is doing well under mullah regime.

Iran before Khomeini was agriculturally self-sufficient.
now the regime has preachers telling people that they should use less sugar.
with Chavez about ready to kick the bucket, Cuba will be needing free oil from someplace other than Venezuela. Perhaps Iran could barter some of the oil it can't sell for some Cuban sugar.

Good rice is good rice. Just imagine if Iran didn't have oil to trade. Then again, if it didn't have oil, this economic war wouldn't be being waged in the first place....,

It shows that India doesn't deserve to be treated as an impartial power of the future world's order and Iran should consider that, when there will be a discussion about a permanent status for India on the UN Security Council....

those who believe the oli against rice is a joke
should consider ther development of rice and other foods.

I made some Basmati rice yesterday,yummy!
Maybe I can trade in for new car?

Your right,Iran was agriculturally self-sufficient before Khomeini and all those "intellectuals" who still claim otherwise are a bunch of knobs.
When Iranians were driving the latest cars and watching color TV (made in Iran) the Chinese were peddling bicycles and using rickety public transport and could only dream of those things.
Now look how the tables have turned on us when the Chinese are exporting their products world wide and two bit states like UAE have become top airline and airline hub in the world as well as a international trade center.
All we have become is the international hub of terrorism and exporting light arms and ammunition to African dictatorships and Hezbollah.
You might be joking about the sugar from Cuba for Iranian oil,but somehow something tells me you're serious.

If Iran didn't have oil the West wouldn't have imposed the mullahs on us to bleed the country dry and keep the people in poverty and misery.

It is a joke pal.
Because Iran Bartering oil for rice and other goods instead of cash makes Iran's position weak and doesn't allow flexibility in the choices Iran makes.

Usual hyperbole aside, Iran was never self-sufficient in food production and was always a net importer even when the population was 40 million. The land reforms were a usual Pahlavi farce and used as a political tool while the Pahlavi foundation ripped off Iranian national wealth. Get a clue guys and quit posting chai-khaneh tales. Iran is a dry arid plateau and agricultural lands and irrigation river systems are limited. It may help to buy a map. While barter is good for mutual trade it also signifies that trade has indeed moved to Asia like manufacturing and all other aspects of global economic power. China, even in a slow economy is growing at over 8% per annum and will be number ONE economy by 2018 or earlier, while the bankrupt US has 20% real unemployment, total collapse of manufacturing and now over $17 TRILLION debt, mostly owed to China and Asia, GO FIGURE.

No,you go and "figure" with your usual diatribe of anti Iranian nonsense and propaganda.
If it wasn't for Reza Shah,Iran would be in five pieces and like Afghanistan is today.Go and educate yourself on history because you know absolutely zilch.
By the way you write,it looks like you have OGHDEH to Iran under previous regime.
"Ripped off Iranian national wealth" you say?
If anybody done and is doing any "ripping of Iranian national wealth" is the filthy occupying Islamist regime which gives away billions of dollars to Palestinians,Syria,Hezbollah and other terrorists like themselves. Billions in oil revenues have gone missing and unaccounted for. While they don't pay workers in Iran for months and sell young Iranian girls to Qatar and UAE for prostitution. Haven't you any shame in the lies you constantly spin?
Your nonsense regarding the Pahlavi Foundation just proves your daily diatribe.The Pahlavi foundation ($10 Billion) remained with the Iranian people after the Shah's departure and became the Alavi Foundation of which billions have been stolen and gone missing by the dirty thieving murdering mullahs,then you blame it onto the Shah??
As for the Land Reform and White Revolution,it was a very good thing because it freed the bonded Rahyat and made him into a free land owning keshavarz. It also stopped the old land owners (the mullahs and rich landed class) from having the "right" to be the first to sleep with the newly married bride of the village before the groom (SEGHEH) exactly what's happening in today's Iran. It also gave equality to women under the Family protection law.Only a backward Akhoond lover would be against such law.
Anybody that was and is against the land reform is either a mullah or a hypocrite mullah lover or wanna be slave plantation owner.
You blab about China this and China that but little do you know that it would have been Iran in its place if it wasn't for Western powers who conspired against Iran and handed it to the backward and greedy mass murdering mullahs.
Iran's growth at that time was 40% per year at maximum more than Japan,while China was riding on rusty old bicycles and wearing torn Moe suits and warn out slippers.
Barter is not "good",only an cretinous person would say such nonsense.Barter reduces and limits Iran's buying power.
You seem to praise China a lot,that proves to me you don't give a damn about Iran and only care about the occupying terrorist theocracies survival and China's pockets."GO FIGURE" yourself you poor soul.

Anon 8:53 PM.....You can talk to these people till you go blue in the face.The fact is these people are trolls who provoke people into reaction.We all know after 34 years of this regime that mullahs lied to us and tricked us into thinking things will be better and freer.But the opposite has become true.With personal freedom lost and political freedom far far worse.To put the blame on foreigners is not totally true because it still took a naive part of our society to come out into the streets and join those agitators who hated everything the Shah supposed to have stood for in their ideological and propagated minds.

No kidding sherlock! You delusional set have been propagating the imminent collapse of Iran for the last 34 years and then some. In the meantime Iran despite US/Zionist sanctions is a nuclear power with enough enriched uranium for a dozen nukes, it has the 16th largest economy in the world, over 90% literacy, 8th largest automotive industry, largest industrial and steel manufacturing base in the Middle-East, 4th largest strategic missile strike force and I can go on, but keep dreaming pathetic pipe-dreams laced with Afghan red, which was also the Pahlavi favourite smoke until the 1979 reality set and poof went the palace dreams-LOL.

You suffer the classic case of the Bache Akhoond syndrome.When you were initiated in the barrel,the mullahs must have seen to you in a big way,LOL!

Mark--- you continue to spew half-honest pap. if Iran didn't have anything to trade other than oil, Iran would still be sanctioned.