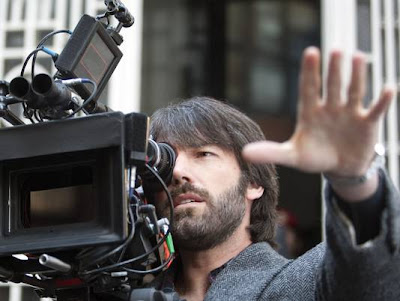 Iran plans to produce its own hostage-release movie in response to Argo, the Oscar-nominated film about the 1980 CIA operations to free six U.S. embassy staff hiding at the Canadian ambassador’s residence after the Iranians took over the U.S. embassy and held diplomats hostage.

The Iranian movie is entitled ‘The General Staff’ about 20 female and African-American hostages released by Iran in the early days of hostage taking and aims at telling the 'good' side of hostage taking. (Mehr News Agency, 10 January)
Photo credit: Director Ben Affleck on the set of the motion picture 'Argo.'  (Keith Bernstein/Warner Bros. Pictures/USA Today)
Posted by Nader Uskowi at 11:00 AM

ARGO is doing its rounds in Iran.Now these idiots are worried that it shows what really happened. So they have decided to make a cheap propaganda movie about the "students" and show how "kind" they were towards the hostages.

INDEED they were kind to hostages!

How do you know they were kind to hostages,were you there?

Of course he wasn't the man is a fool.

So the "Hitler Youth" are now into the movie making business.....Hollywood Persia style...LOL!!!