"Going to Tehran": A book review 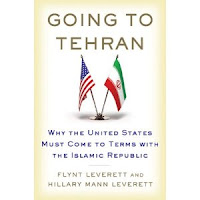 I had high hopes for this book. Even so, after giving it a read I can truthfully say my expectations were greatly exceeded by the authors.

Arguably for the first time, we Americans now have a concise account that includes perspectives from both former U.S. government officials and those of their Iranian interlocutors, providing probably for the first time an accurate depiction of U.S.-Iran relations (including the nuclear issue), as well as an accurate depiction of the Islamic Republic in general. In addition, the Leverett's provide us with a list of those responsible and their agendas for presenting we Americans with the inaccurate depictions of events, politics and life in the Islamic Republic that until now was regarded as "common knowledge".

However, the greater value and the service the Leverett's have rendered we Americans is the identification of American interests in generating a peace and rapprochement towards Iran, and how without it we're likely set on a path for yet another self-destructive war in the Middle East.

Also included are the number of times post-revolutionary Iran has cooperated with the United States in the hopes of improving relations, only to be stiffed for such assistance, even penalized. Hillary Mann Leverett is in the unique position as a former U.S. government official charged with accepting Iranian cooperation, to recount such two-faced episodes in American history.

Regarding the Nixon-to-China moment persons like myself would like seen applied to the Islamic Republic of Iran, the book presents a well articulated presentation of the historical motives involved for Nixon and Kissinger's highly successful rapprochement effort towards the People's Republic of China, how they carried it off and how by example the same can be applied with regards to Iran.

As for persons here in the United States that maintain and perpetuate such myths as Iran's innate political need for maintaining the U.S. as an enemy, or that a majority of Iranians inside Iran are against their political system of government, or that fraud took place during the 2009 presidential election, there is now no excuse for such ignorance. The facts are now laid bare within the pages of the Leverett's new book.

This is a must read for those interested in Iran, U.S.-Iran relations, U.S. interests and peace.

Special thanks to the San Francisco Public Library System and the Peninsula Library System for ordering multiple copies at this writer's request.
Posted by Mark Pyruz at 1:26 AM

"or that a majority of Iranians inside Iran are against their political system of government,or that fraud took place during the 2009 presidential election,there is now no excuse for such ignorance."


The majority of Iranians want the death of this regime,let alone being against the political system of torture and execution.If it wasn't the case then why does the regime have their battalions of armed thugs patrolling streets and mounting rooftops with snipers to kill demonstrators against the regime?
We see with our very eyes what this regime is doing to Iran without the need to read a book written by a westerner who is sympathetic with the Islamist regime.
It's almost laughable that someone like you is trying to peddle this book on us, thinking you can fool us with your propaganda and nonsense.Looks like the only one that lives in ignorance is you.I almost feel sorry for you if it wasn't for your constant anti Iran stance in supporting the terrorist sub human barbarian Islamist theocratic mafia regime.

He can begin by explaining why there are so many thugs on the streets waiting to suppress political activeness, cyber monitoring, jailing of Iranian students, hanging, torturing and raping of Iranian political activists, a crackdown on satellite dishes, lack of journalistic freedom, lack of freedom of political movement, house arrests of political leaders, jailing of liberal ayatollahs like Boroujerdi, murdering of bloggers like Sattar Beheshti, killing of Kurdish intellectuals, moral police, basij-thugs, prosecution of minorities, etc.

One would think that a regime and system that is supported by a clear majority of the people, wouldn't fear its own people so much. I'm waiting on your answers.

And, yes, I know... I'm a payed agent of the IRI for disagreeing with you.

There is no way to quantify the public anger since the regime has turned major cities into military barracks. Many Iranians would risk arrest, rape, and death if they were to demonstrate against the regime. None of this is a great secret.

Just because the majority of Iranians seem to hate the regime, that doesn't make it easy to remove. If that were true then the East Germany regime and the Soviet Union would have collapsed much sooner than they did.

I would not state the majority of Iranians hate the regime. The majority are indeed dissatisfied (especially the youth) but not to such an extent that they would rise up against it. Again, if the Iranian people managed to revolt against the Shah and his notorious security apparatus, then the same could happen now. If the economy deteriorates much further then social unrest is more likely but not as things are now. You should also keep in mind that many of those who are dissatisfied put up with the regime due to any real alternatives in the opposition - so disliking or even hating the regime does not mean that the alternatives are supported.

...and comparing the IRI to the Soviet Union or East Germany is giving it too much credit. The IRI has survived because it is relatively speaking quite harmless to western interests in the region.

Anon 12:31 PM....Here we go again! The Shah's so called "notorious security apparatus"can't be anywhere as notorious and barbaric as the Islamist fascist regime's security apparatus.
Why? Because the Shah forbid the security units from using live rounds or rounding up the ring leaders and putting maximum force on the protesters in the long term.That despite what some of his general wanted to deal with the public.Basically the Shah tied their hands up.
Now compare him to that mass murderer Assad of Syria or Ghadafi of Libya and not least of all Khamenei who publicly said in 2009 "Don't blame the security units if you're shot at or killed because you have only yourselves to blame".
The Iranian people know that the regime is barbaric and will use maximum force to put down the demonstrators.If you look at the 1979 demonstrations against the Shah,the people knew that once the Shah ordered the security units not to use brutal force they came out and demonstrated in greater numbers.In 1979 the Shah ordered not to use force against the demonstrators during Ashura yet Khamenei ordered maximum force to put down the demonstrators in 2009 during the day of Ashura!
That's tells me that Khamenei is a criminal and charlatan who has no respect in the religion that he claims is the guardian of.
Yes they are harmless to Western interests but harmful to Iranian interests because the regime was installed by the West to serve its purposes and keep the Iranian people down in abject poverty.
And yes the majority of Iranians do hate the regime.If it wasn't so then why is it that seven million Iranians have left the country? And tens of thousands are leaving the country on a monthly basis which is leading to a brain drain of the nation.
As for the "not as things are now" brigade,then when? When woman are chained in their homes or workers work for a loaf of bread a week without pay for months on end?
There are real alternatives! You start by ignoring the regimes alternatives and build your own alternatives.If the regime disagrees or tries to put down your alternatives (which they trying to do already) you start again until you clearly put it across that they are not wanted to represent the people.
The regime knows this and that is why they brutally put down demonstrators.
So my answer is if not peacefully then forcefully if necessary to have this alternative to remove the regime and save Iran from the clasp of these criminals.

Clearly Mark Pyrus wouldn't be able to answer your very correct description of the Islamic theocracy.People like him are planted in the net to try and discourage Iranians to think for themselves and just believe what ever the mafia regime tells them.
Well done! You have reached the point of no return and know who your enemies are!

By saying what you said "If Iranians truly wanted a regime change nothing could have stopped them" quote,proves to us that you're a sympathizer of the regime.
And one thing.If you call mass executions,hanging people on trumped up charges in public streets,arrest of innocents,murdering bloggers and claiming it was an "accident",shooting peaceful demonstrators from rooftops by snipers,the highest rate of executions after China with a population eighteen times larger,mass graves of political activists that are not marked,countless thousands rotting in political prisons and being tortured and raped then executed and then claim to say "lets not exaggerate"proves to us that you are a member of the sleeping beauty brigade.

The only mafia I see here are the likes of you who rather rabidly jump the throats of anyone who doesn't share your opinion. I hope that one Iran is a secular and democratic state - as long as it does not fall into the hands of intolerant bigots.

No,the intolerant and rude little bigot is someone like you who lacks manners and doesn't know good from bad.
You are very sad and pathetic person and can't see that the country has for the past 34 years fallen into the hands of intolerant bigots.You deserve all the bigotry from the present regime in power because they are the most intolerant bigots of all pal.

Calm down dear. You are supposedly on the sensible side (remember? IRI bad, USA good, sugar sweet etc). You Shahi and MKO trolls have a bad temper and make even the IRI thugs come across as humble.

Just stick to your agenda of daily diatribes and hypocrisy as a Cyber Basij, because you reflect your "humble" terrorist masters in the art of lying.